Round 8: And Then There Was One

Jones sat down speaking of the English curse. That is, how the English have the tendency to go undefeated on Day One but then fall apart on Day Two. He cited himself at Pro Tour-Tokyo and John Ormerod at Worlds as his prime examples. Still, by winning here Jones would leave himself alone at the top of the standings, a perfect 8-0. Then again, Raphael Levy wouldn't mind being undefeated either. The man has played in "some" Pro Tour events. The "French Darwin Kastle" would perhaps be a fair comparison. 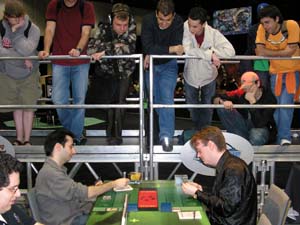 An undefeated Day One was on the line.

Levy began with a Swamp and Duress. Jones revealed from the Loam, Deep Analysis, Darkblast, Chrome Mox, Golgari Grave-Troll, Wild Mongrel and Polluted Delta. The Delta was Jones' only land, so Levy predictably took the Mox.

Of course Jones had to chuckle when he drew and it was Chrome Mox. Levy responded with a "Good job."

Jones played the Mox and pitched Golgari Grave-Troll, sacrificed his Polluted Delta for an untapped Watery Grave and played out a delicious turn-one Wild Mongrel.

Levy was not pleased. Not only did Jones draw the perfect card, but also Levy had no turn-two play. Jones tossed the from the Loam to his Mongrel and then d it back to fix his mana draw. An attack from the Wild Mongrel left the score tied at 17.

In Levy's main phase he wasted no time in hitting the Wild Mongrel with a Putrefy. Jones d away two more Wild Mongrels when he returned from the Loam to his hand. Then he cast a Deep Analysis.

Levy played out a Sword of and , but had no creature to equip on the table. Jones started out by Cycling a Barren Moor before returning a Polluted Delta and the Barren Moor to his hand with the from the Loam. To finish his turn he flashed back the Deep Analysis. Jones had been inflicting a lot of damage to himself and was down to 10 life without any assistance from Levy.

Levy took his time before deciding to play a Dark Confidant and equipping the 2/1 creature. Jones brought back his from the Loam, used an Echoing Truth on the Sword of and and killed Dark Confidant with a Darkblast.

Levy still had game though. He came out with a Duress, taking a second Darkblast, leaving Jones with two Golgari Grave-Trolls and a number of lands. Then Levy played a Call of the Herd. Jones brought back a from the Loam again. He cast it to grab a number of cycling lands and cast a 7/7 Grave-Troll. The Troll had trample thanks to a Brawn in the graveyard. Levy replayed the Sword of and and equipped his elephant.

As he did this Jeroen Remie yelled from the stands, "Levy! Use me as a token!" as he pointed to Levy's stack of Pro Player cards. Levy responded, "You don't want to be an elephant."

Jones brought back the from the Loam again and hit Levy down to 10. A Putrefy, which Jones knew was coming even though he had never seen Levy's hand, let the Elephant token through and knocked Jones down to 3. Levy finished the turn with a Jitte.

Jones went down to 2 life as he sacrificed a Polluted Delta. He had a 7/7 Grave-Troll but needed to kill Levy before the last elephant finished him off. Jones cycled a Lonely Sandbar and then played both a new Grave-Troll and a Wild Mongrel.

Levy had no way to stop the massive Grave-Trolls and had to concede. Jones said, "That was Plan B. I haven't won with the Grave-Trolls before." 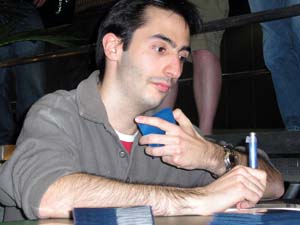 Levy went on the offensive with Hypnotic Specters

Levy swung in with the Specter and plucked a Tog from Jones' hand. Levy brought out a second Specter to punish Jones. Jones hit back with a Wild Mongrel and played a .

Levy played Duress and grabbed a second from Jones' hand. His two Specters took a Putrefy and a Wild Mongrel, leaving Jones with just a single land in hand. To no one's surprise, Jones blew the Deed. Levy continued to produce threats, as he played out a Troll Ascetic. Jones ripped Careful Study and placed a Genesis into his graveyard.

Levy had the perfect answer to Genesis; Withered Wretch ended any Genesis shenanigans before they began. With one draw step left, Jones found a temporary answer with Darkblast, using a second, and the last card in his hand, to kill the Wretch but Jones succumbed to the Troll Ascetic on the following turn.

Jones began with a dual and a Darkblast for Levy's first-turn Birds of Paradise. Jones went on the early offensive with a second-turn Wild Mongrel. I could see Levy's hand and it would have been much better on the play. Levy needed to make up his mind. 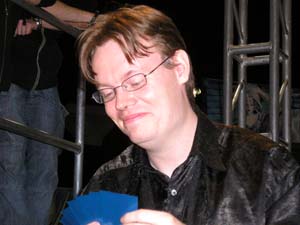 Why is this man smiling? He might just be undefeated.

His hand was Hypnotic Specter, Chrome Mox, Withered Wretch, Smother, Duress, Swamp and Windswept Heath and his board a Forest.

What would you do? Don't forget an undefeated Day One was on the line.

Levy eventually decided just to kill the Mongrel with the Smother. Jones threw a Deep Analysis into his graveyard so he would be able to flash it back on the following turn.

Levy sacrificed the Heath and cast a Withered Wretch, removing Darkblast from the game. Unfortunately for Levy, Jones had a second Darkblast. Since Levy was tapped out he could Darkblast and redraw it to finish of the Wretch.

Levy pulled Circular Logic with the Duress. Then he cast a Hypnotic Specter. Jones used a cycling land to repeat the double Darkblast trick. He also cast a Wild Mongrel.

Levy had no choice but to keep throwing out threats. He played a second Hypnotic Specter. Jones had no cards in hand, facing down the Specter but kept the card he drew in hand.

Levy ripped a Sword of and , but when he went to equip the Specter it was met with a Putrefy. It was only a slight hiccup for Levy as he went back to his deck for a Troll Ascetic. Troll plus Sword of and meant that Jones went to his graveyard to pull out a Golgari Grave-Troll. After paying the cost, the Troll was a 4/4.

Levy took down a Wild Mongrel but Jones went back for a second Troll. This Troll would be a 5/5 thanks to the newly deceased Mongrel but Jones still only had five lands. Instead of playing the Troll, Jones used Deep Analysis to a from the Loam and cast it and a Sensei's Divining Top. Levy needed help from his deck one more time but could only manage Duress. The Duress took a from the Loam but the situation was getting grim for the Frenchman.

Time was running low and Levy couldn't find help. Jones was under pressure as time was called for the round. It was unclear that he would be able to get past the Troll even with his dominating position. He cast a Golgari Grave-Troll as a 7/7. The life totals were Jones 8, Levy 13 -- and Jones was on the final turn before the extra-turn count began.

Levy drew and cast a Cabal Therapy. He hit a Putrefy from Jones' hand. Levy's marksmanship had been helped by the fact that Jones had accidentally dropped the Putrefy onto the table a few turns earlier. Levy played a Llanowar Elf as additional food for Cabal Therapy. The Therapy took out from the Loam, leaving Jones with just two cycling lands. Jones counted and recounted his library. His graveyard was huge but as Levy went through it, there was neither Brawn nor Wonder to be found. It looked as if Levy was now fighting for a draw.

Jones used his top to mill three cards into his graveyard. Then he d a third Grave-Troll, finally flipping a Wonder into the bin. Levy couldn't find a way to remove the Wonder and lost to giant flying Trolls.

Craig Jones is the only undefeated left in Pro Tour-Los Angeles!