Round 8:
Banes, Blue Spells, and Brawls

This final round of Standard play featured Raphael Levy and Ben Stark, two stalwarts of Magic, both Pro Tor Champions who have been playing since the dawn of time, with Levy earning himself the game's highest honor: a seat in the Hall of Fame. Before the match started, the players talked at length about their preparation for the event.

"I absolutely loved the fact that Gatecrash was out early," Stark raved to Levy as they shuffled up before the match. "Getting to draft on Magic Online for like a week beforehand was incredible. I hate drafting with my team. Half of them want to draft three color, seven-drop dot deck. The others always draft the same thing, and I know their preferences. It's miserable. Who did you test with?"

"All of the new Frenchies," Levy responded.

"Are they pretty good?" Stark asked. He remarked about the strength of France's older players.

"Yeah, sounds like you've got a pretty good squad," Stark said with an acknowledging nod. 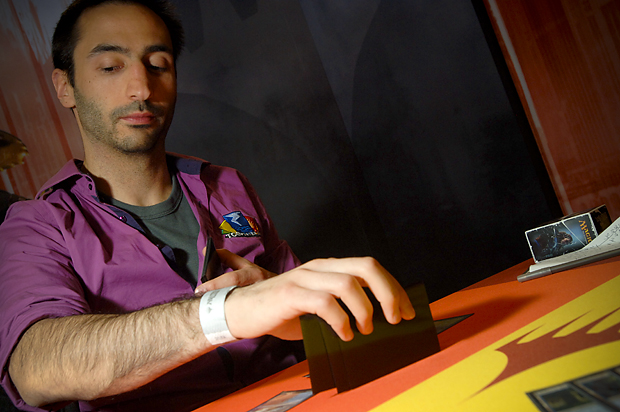 Hall of Famer Raphael Levy, ready to take on Ben Stark in a Sphinx's Revelation showdown.

As the players finished their shuffling, all the while discussing the history of Europe's Magic powerhouses, Stark was asked to clip on his microphone, lest the world need to hear his dulcet voice. As he fumbled with the mic, he laughed.

"Dressing myself is not my specialty," Stark joked as he clipped his microphone on. "As you can probably tell by the shorts..."

Levy led with a Temple Garden, while Stark played the newly legal Watery Grave. Things took a bit of a rough turn for Levy when he missed his third land drop. As Levy tried to cast a Farseek off of his only two lands, Stark laughed, before conceding that he'd let it resolve. Levy searched up for a Steam Vents, slightly confusing Stark.

"Hmm, I'm not sure whether I'm supposed to mill you with that in play. You could be on Reanimator."

Levy broke out of his drought with a Kessig Wolf Run, but he was still far behind. Even with Stark feeding him Think Twices, Levy still managed to miss land drops. Stark, meanwhile, continued the long journey to the bottom of Levy's library, three cards at a time. Each activation was followed by a draw step that failed to yield land for the French Hall of Famer.

"Miss, miss, missmissmiss," Levy lamented with a less-than-amused smile on his face.

When a second Nephalia Drownyard hit the table for Stark, a frustrated, yet stoic, Levy picked up his cards with a slow flourish.

"So do you want to play or draw?" Stark asked.

Levy shot him a curious look.

"It's a real question," Stark smiled. "If you were playing an aggro deck, I wouldn't even bother to ask. But with you on control, there are definitely matchups where it is correct to draw first. I think..."

Once again, Levy led with a Temple Garden, but this time he was able to Farseek on turn two and still make a land drop on the turn after. With a Temple Garden, Glacial Fortress, Sunpetal Grove, and Steam Vents in play, Levy tapped his lands for a Witchbane Orb.

"That definitely does some things," Stark nodded as the artifact hit play. "I'm not going to pretend that it doesn't."

On his next turn, Levy fired a Centaur Healer and a Rest in Peace into Stark's three untapped lands. Both spells hit play, and Stark use his mana to Think Twice. On his turn, Stark revealed that he was running into the same issues Levy had last game. He cycled an Azorius Charm looking for a land, but instead found himself discarding a Jace, Memory Adept. He did find a land on the following turn, but his Isolated Chapel came into play tapped, leaving him just enough mana to Dissipate Levy's Thragtusk. 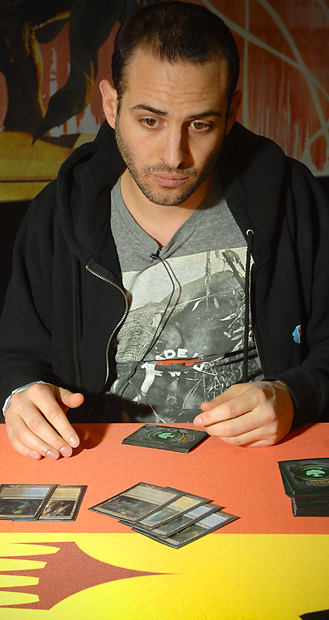 Ben Stark works to find his land drops, all while trying to fight back Levy's army of creatures.

Stark began to claw his way back into the game, using Augur of Bolas to dig into his deck and an Azorius Charm to return Levy's attacking Healer to his deck. Unfortunately for him, that gave Levy the window he needed to resolve a Sphinx's Revelation for five, refilling his hand. Levy simply untapped on his turn and replayed his Healer, with a boatload of cards in tow.

Levy attempted to cast a second Revelation for three, but Stark wasted no time Negating it. Levy was down to four cards to Stark's five, but he held the advantage on the board. That advantage disappeared soon when a flashed Restoration Angel allowed Stark to favorably block the Healer. Once again, Stark's tapping mana on Levy's turn cleared the way for a huge Sphinx's Revelation, this time drawing seven cards. Levy was up to a monstrous 33 life with a full seven cards in hand. For a brief moment, Stark held the board advantage and began to chip at Levy's life. With the addition of a pair of Thragtusks, however, the hammer swung firmly in Levy's favor. Jace, Memory Adept allowed Stark to have a potential game winner if he could remove the Witchbane Orb, but for now, the artifact was denying him a chance to take the lead.

Levy attacked with his men. Stark blocked with his Angel, dropping Stark to 9. Stark tried to cast a Sphinx's Revelation for four at the end of Levy's turn, prompting Levy to respond with one of his own for the same amount. This filled both players' hands and made the life totals 43-13 in favor of Levy. Stark continued to use his Jace on himself, putting it up to seven counters, primed for an ultimate. Levy had drawn a significant number of cards, thus the Jace was nearly potentially lethal. Levy added a planeswalker of his own, a Garruk Relentless, to his team, prompting Stark to Think Twice for an answer. It resolved, and the Garruk fought Stark's lone creature, an Augur of Bolas, to flip and clear the way for this team. Levy began to count his deck, fully aware of what Jace could do the second he gained access to Levy.

Levy's team attacked. He had a Kessig Wolf Run and all of the mana in the world at his disposal. He ended up sending his Beast token at Jace and the Thragtusk at Stark. Before damage, Levy used the Kessig Wolf Run to pump the Beast large enough to kill Jace, dropping Stark to 8 in the process. Stark tried to fill his hand with another Revelation, but Levy had left enough mana up to Negate. Stark went ahead and drew his card beore surveying the card and conceding the game.

"So now, you should let me play first right," Levy joked?

"This is a little different," Stark shot him with a sidelong glance. "I mean, you're not playing counterspells. You're trying to actually do things."

The shuffling continued and Stark announced that the last game was the first that he'd lost in Constructed today.

"I got to make fun of the rest of the team because I usually do really well in Limited, but Constructed is more of a question. I was this close to being able to say 5-0, 10-0," he sighed.

"You are cutting into both our dinner times..."

Now on five mana sources, Levy weighed his options, opting to run a Witchbane Orb into a potential counterspell. Stark indeed had the Dissipate, and the Orb was exiled. After single-handedly winning Levy the previous game, Stark was sure to deal with the troublesome artifact. With Stark not showing any signs of offense, Levy flashed in an end-step Restoration Angel. On the next turn, it began taking Lightning Bolt-sized chunks out of Stark's life. As Levy tried to refill his hand, Stark stood resolute with a Negate.

Levy was sitting on two cards in hand when Stark aimed a Duress at his hand. In response, Levy fired off another Sphinx's Revelation for six. Stark thought for a while before playing Dissipate. The Duress resolved, revealing a lone Centaur Healer. The Healer came down with a Thragtusk, putting life totals to 26-11 in favor of the Hall of Famer.

"This is going to be an interesting one," Stark whistled. "I have Revelation, but you have a million bodies."

Stark cast the Revelation for six, going up to 17. Levy cast a game-changing Gisela, Blade of Goldnight. This forced Stark to chump block the Thragtusk with his Augur, going down to 5 in the process. Stark replaced the Augur. When Levy attacked, a flashed In Restoration Angel revealed aPlanar Cleansing to come, and an Azorius Charm kept Stark from dropping below two life. After combat, only the Restoration Angel and Thragtusk remained for Levy, while Stark was on a lone Angel.

"This is really going to be interesting," Stark echoed with a shake of his head.

Stark untapped and played Jace, Memory Adept, using it to remove the Gisela, Blade of Goldnight on the top of Levy's deck. A second Restoration Angel gave him the other blocker he needed to stay alive.

"Don't slowroll me," Stark hollered! "If you can kill me, kill me!"

Levy thought hard before playing the card he drew, Breeding Pool, and trying a Sphinx's Revelation for a bazillion. Stark had one mana available, perfect for a Dispel. Levy was out of cards, while Stark was sitting on a nearly full hand, including a Planar Cleansing. Levy attacked, and Stark made the necessary blocks, killing the Thragtusk. Planar Cleansing cleared the board, including Stark's Jace, and he followe that with a replacement copy of the planeswalker.

Akroma's Memorial got a long, hard look from Stark as he read and reread the abilities granted by the artifact.

"Okay, I guess," he said, replacing it on Levy's side.

On his turn, Stark milled the top ten cards of Levy's deck. In order to make sure that a hasty threat didn't kill him, Stark cast a Sphinx's Revelation for ten, going up to a relatively safe 12. Levy flashed back a Think Twice, drew his card, and prayed. Centaur Healer wasn't enough, but Stark still dropped to 9. Angel of Serenity kept him seemingly safe, removing the Healer, and his Jace put Levy down under twenty cards. Levy drew his card, said, "Please don't have a counter," and dropped a Witchbane Orb into play.

"I...actually...don't have a counter," Stark said rummaging through his grip. The Orb looked like it would stave things off. In response, all Stark could do was use his Nephalia Drownyard to mill Levy for three. Stark kept adding big beaters to his side, including another Angel of Serenity, while Levy refused to draw threats. Stark continued by padding his life total with Sphinx's Revelation, going up to 14. Stark swung with his mighty fliers, and Levy dropped to 7. One final attack, and Stark had clawed back from 2 life to take the final game of the match. 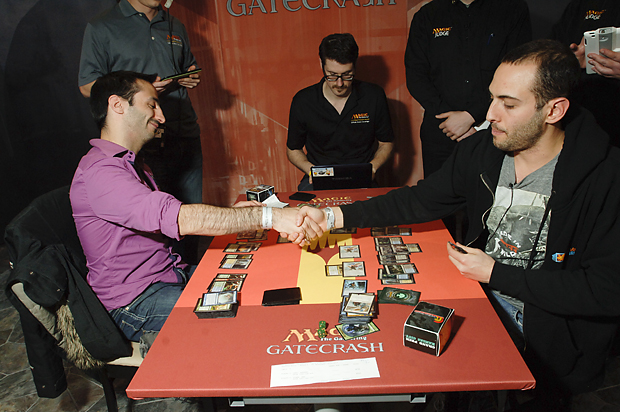 After a hard fought match, the two players shake hands, wishing each other the best of luck in Day Two.

Both players exhaled the tension after the match had closed.

"That was a really close one," Stark admitted. "I had to use everything."