Round 8: Ben Rubin vs. David Humpherys 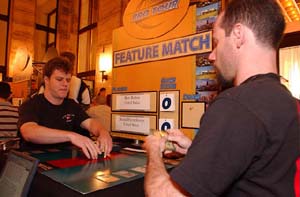 Saturday morning at the Pro Tour most of the pros were scouting their potential day 2 competition. Each team had a list of players and they were trying to figure out what everyone else was playing. At one point I saw Ben Rubin walk up to Zvi Mowshowitz and ask him "How do I beat Bidding with Slide?" Zvi's answer was not what Ben was hoping to hear: "With cards that aren't in your sideboard." Rubin further explained "There's two Bidding decks in my bracket ... and there's only 5 players [at 5-1-1] ... and one of them is me." Zvi and Brian Kibler both winced upon hearing Rubin's fate. They also both explained to Rubin that the only plan that worked was to board in four Stoic Champions. Kibler claimed he had told his buddy Ben about the Champions before the tournament, but Rubin couldn't remember ever getting that advice. Rubin does have Complicates, but without any way to put pressure on an opponent playing a Bidding deck, a smart Bidding player can just play around them. Thus his only real plan is to play an angel on turn 3, flip it over on turn 4, and hope that's good enough.

When the round 8 pairings went up, Rubin did indeed get the pairing he feared: Dave Humpherys playing Bidding against him in feature match. All the playtest teams who were preparing for Venice started with the red-white cycling deck and then looked for ways to beat it. Pretty much every one of them eventually discovered that you could destroy it by putting a bunch of beasts into the graveyard via cycling or Read the Runes and then bring them all back with Patriarch's Bidding. Many even threw in Aether Charge to turn their combo into an immediate win. Head Games gives the deck a lot of power too – against slower opponents the Bidding player has plenty of time to set up his own hand then destroy the opponents hand before "going off." Basically, the discovery of Bidding deck showed that this environment did indeed have a "paper" that could destroy the "rock" deck that everyone knew Slide to be. After that, playtesting kicked into high gear and the environment was judging to be both deep and interesting. 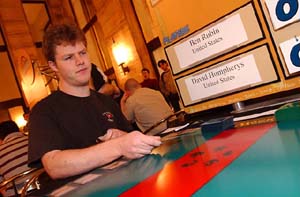 Rubin didn't get a turn 3 Angel in game 1, but he did get a turn 2 Rift and he got to cycle Complicate on turn 5 to stop a Bidding that was threatening to put two Barkhide Maulers into play. Rubin then tapped out for an Exalted Angel and crossed his fingers. Humpherys had nothing. His draw had only the one relevant spell and Rubin's Angel plus Rift dealt 20 damage pretty quickly, moving him halfway toward a potential upset victory.

Game 2 went much better for Humpherys: he played a face down Krosan Colossus and then Read the Runes for 3. Ravenous Baloth and a Krosan Colossus went from his hand into the graveyard and the face down Colossus went from play to the graveyard. Rubin cycled desperately, but couldn't find any blue mana so Humpherys didn't even need to think about Complicate. "Well, I'm excited," said a forlorn Rubin as he passed the turn. Humpherys. Humpherys, however, had not yet found a Bidding so he had to play Read the Runes again. Rubin did some more cycling and still couldn't find blue mana, but he did find Akroma's Vengeance, which meant the one Bidding Humpherys dug up just gave him 20 life.

Humpherys was then forced to go with his back-up plan: he played a face-down Colossus, threatening to flip over the 9/9 on his next turn. Rubin answered with his own 8 mana creature: he summoned Akroma and sent her over. Rubin saw that his Akroma would get picked off by Contested Cliffs on Humpherys' next turn so he chump-blocked with Akroma, trying to make her mad, hoping her Vengeance would show up to save him. It didn't – Humpherys' back-up plan of spending three plus eight mana and then attacking four times with a 9/9 monster got the job done. I love this format. 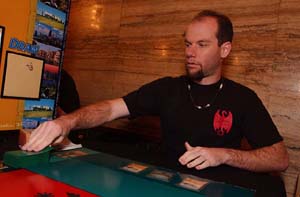 Game 3 started slow for Humpherys – he didn't play a single spell until the end of Rubin's seventh turn, when he finally tried to Read the Runes. Humpherys wisely left open one mana and Rubin was forced to hard cast his Complicate. Rubin actually looked like he had a chance at this point – he had played a turn 2 Lightning Rift, so he was already chipping away at Humpherys' life total, and then he busted out Rorix Bladewing. Humpherys. However, Humpherys had the answer in the form of a giant Gorgon that could tap to kill dragons. The Hump did have to go down to six life while waiting for Visara to get over summoning sickness, and he would have died to three cycling cards, but Rubin didn't have them. One, two, three Ravenous Baloths later Humpherys had plenty of life and now the only threat was the clock. Rubin swept the board of Visara and Ravenous Baloth with Akroma's Vengeance and then answered The Hump's first Patriarch's Bidding with another Vengeance, but after that Rubin was exhausted. The Hump's second Bidding found Rubin with no cards in hand and Vengeance #3 was not on top of his library.