Round 8: Ben Rubin vs. Eivind Nitter 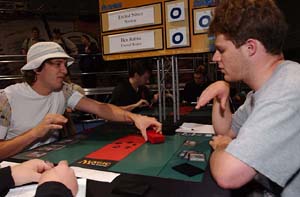 You would be hard pressed to find two more... how to put this... confident players in the world of professional Magic. Ben has not won a Pro Tour although he has made the finals twice. Eivind has only made the finals once but he did happen to win that one. Ben is the only player that can boast two Masters titles but he will always be remembered for his last round yesterday. With a 4-2 record and facing elimination, Ben was paired with one Kai Budde. A draw would guarantee both players a day 2 berth and Kai offered the draw.

Ben wanted to play and today he is sitting at the feature match table while Kai sleeps in for the first Pro Tour Saturday in over two years.

Gabe Tsang leaned back from a nearby feature match, "Good beats...that last match!"

Both players are running Psychatog decks with slight differences. Eivind is sporting Cunning Wish to access a variety of singletons in his sideboard while Ben's deck is more dedicated toward winning Game 1 against beat down and reanimator with main deck Engineered Plague, Rushing River, and Diabolic Edict.

A serious air hung over the feature match area as they waited for the clock to start. Ben won the roll with a hardy 19 which made the thus far stone-faced Eivind break out in laughter. Ben elected to draw first and the decision seemed to pay off immediately in the form of a mulligan by Eivind.

Eivind's next hand provided him with plenty of land while Ben found him self stuck on the two lands in his opener and was forced to discard an Engineered Plague at the end of turn three. His opponent was having no such problems and continued to develop his mana. Ben found his third land on the next turn and did nothing as Eivind cast Cunning Wish to put a Gainsay in hand.

Eivind played Polluted Deltas over his next two turns while Ben discarded Wonder and Force Spike. He found his fourth land--a Polluted Delta--on the seventh turn of the game and cracked it for an Island to Foil Eivind's EOT Intuition.

Eivind took advantage of his fetch land this turn by using to shuffle his empties back in after a Brainstorm and played a Psychatog. Ben played an Underground River—only his fifth land to Eivind's seven.

The Norwegian sent his Tog into the red zone for the first non-fetch land point of damage in the game. "How much? One?" Edict shot down the Tog EOT and Ben missed another land drop. Eivind attempted a Fact of Fiction and he won the counter war and nabbed himself another Counterspell and Accumulated Knowledge.

The draw-go portion of the game was on as both players played their lands and passed the turns fairly briskly. Slowly Ben started to catch up in the land department and nothing exciting happened until a brief skirmish over Eivind's EOT Gush, which resulted in Ben's FoF getting Memory Lapsed and two cards for the man from Norway. 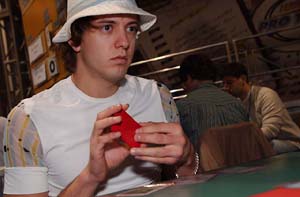 Tog hit the board after he untapped and another conflict developed over the Lapsed FoF during Ben's turn. In the middle of three Counterspells Ben snuck an Edict onto the stack to kill the smiling Atog. In any AK mirror match it is risky to cast the first one the game often comes down to who can hold out the longest. Eivind cracked first and drew a card during Ben's EOT.

Another Tog hit the table—the remove from game ability can let you cast your AK's and minimize your opponent's ability to cash in on them—and then Eivind cast his second AK. Ben attempted to Edict in response but and Aether Burst crumbed the play and then AK resolved for two cards...and then another for three cards. Ben had nothing for the bottom half of the turn.

The Tog made its triumphant reappearance and Ben could only shrug. He still had no play on his turn and Eivind fueled his graveyard with Intuition for three lands. Eivind attacked for five on his next turn and sent it over to Ben who tried an AK but all it did was make Eivind's Tog bigger and he drew a single card.

It wasn't enough as his attempt at Rushing River was countered during the next lethal attack step.

The fist game took the better part of an hour and there were only 20-odd minutes left in the round and there was a strong possibility that Eivind could win this match 1-0.

Ben decided to go with the conventional wisdom and play firs this game. Both players kept their hands and it was all draw-go for the first six turns of the game until Eivind sacrificed two Deltas. Before he could get the lands Ben asked him to hold on. "Wait, wait, wait. They're both on the stack..." Ben was considering whether he should try and take advantage of the temporary dip in mana from five to three but ultimately let them resolve and Eivind found two Islands and tapped out to Gush. Ben responded with FoF and got a Tog and a Deep Analysis for his efforts. Gush resolved and both players were up two cards. Eivind played a land and discarded an AK for his turn.

Eivind cast AK for two at the end of Ben's uneventful turn and discarded and Aether Burst at the end of his next turn. At the end of Eivind's next turn Ben attempted a FoF and got a Duress and two Islands over Tog and Deep Analysis but not without eating up a lot of time on the clock. Ben urged Eivind to play faster and he explained that he was not looking to sleaze Ben out on time, "I'm playing as fast as possible but splitting these FoFs!!!! Deep Analysis just 'effs' it up so much." Eivind tried an Intuition but it was met with counter magic.

Was it time for the Tog? Ben used Duress to find out and saw two Misdirection, Counterspell, Gainsay, Aether Burst and Memory Lapse. He took the counter and then took the Gainsay with another Duress. Now it was time for Tog! Ben followed it up with a flash backed Deep Analysis that stripped both Misdirections and an Aether Burst and ultimately resolved. Eivind had nothing on his turn and graciously scooped without making Ben go through the time consuming motions of doing the math with only ten minutes remaining for the deciding game. 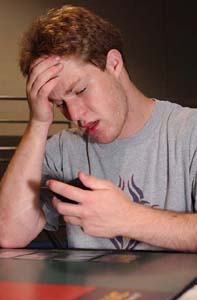 Eivind played first and both players kept up a brisk pace throughout the match as neither one would be content with a draw. Ben attempted a turn three main phase Intuition that served to duress a Counterspell—although Ben would have probably preferred to find a fourth land. Ben cast AK at the end of the fourth turn but missed a land drop and discarded Deep Analysis. Eivind played lands every turn until Ben took a Leak on his EOT Gush. Eivind Intuitioned for Underground River at the end of the next exchange of turns and Ben drew out a Gainsay with FoF. Ben flashed back his Deep Analysis only to have it Misdirected to Eivind. Ben then played another form his hand and both players drew two cards.

Despite drawing cards Eivind was till falling short in the action department. Ben attempted a Tog that did not survive the counter war. Ben went to ten and flashed back last turn's Deep Analysis. Eivind cast an AK for two cards and found a Tog of his own. He used the ACC for Gush and drew two cards and replayed an Island. Ben attempted to Edict it on his turn and an Aether Burst saved it. Ben cast FoF and took another Leak on Eivind's Counterspell. Eivind made the 2xIntuition and 2xIsland vs. Tog split and Ben opted for the four-card pile.

Eivind was losing the battle of card advantage and had to hope he could get his Tog to stick around long enough to finish the two time master winner. They did the Edict Aether Burst dance on the following turn and Ben main phased an Intuition for Edict, Edict, and Deep Analysis and got the blue spell and cast it.

Eivind saw light at the end of the tunnel and attempted to AK for three. Ben Foiled it pitching two Islands and Eivind looked at the four Edicts in Ben's bin and played the Tog, which resolved just as time was called. Ben smothered it on the first extra turn prompting, "Aieeeeee!" from the taciturn Norwegian. Ben then used Intuition the way God intended and presented three AK's for Eivind to choose from. Ben drew six cards as the game slowed down to a more deliberate pace now that time was no longer a factor and discarded Wonder with a fall set of seven cards in hand.

Turn two saw a dejected Eivind say, "Go." Duress from Ben revealed three lands and his Tog landed safely with enough turns to do the deed. Eivind looked at his top card and didn't find a miracle waiting for him and conceded. Ben expressed his gratitude for the brisk pace of play and these two consummate Pros shook hands and prepared for their next round just moments away.