Round 8: Ben Seck vs. Chris Kwan

Ben Seck has two types of Grand Prix's… The ones he wins and the ones that end in tragedy in the final round of Day #1. Today, In the final match of Day 1 he plays Brisbane's Chris Kwan. Chris and Ben are part of elite club with very exclusive membership - both player's have 6-0 the draft portion of the Australian Nationals to follow it with 0-4 on day #2. 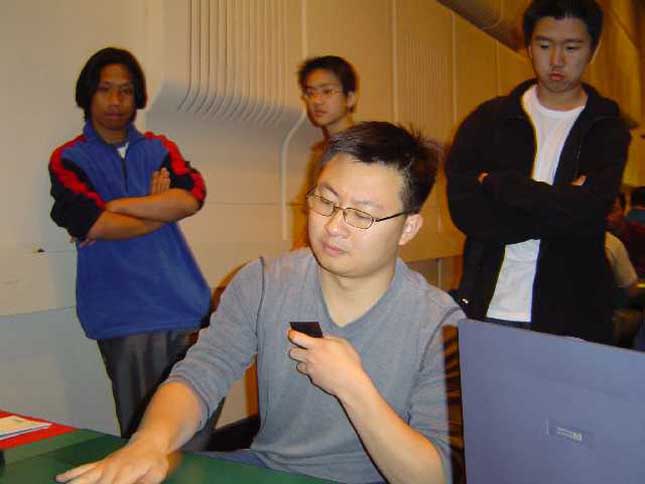 TBS opened with a Gold Myr on the second turn as Kwan follows in kind with a silver. Seck swings for an early point before dropping a Soldier Replica. This is where Kwan takes full advantage Kwan gets the 4th turn Flayed Nim with the mana acceleration. Tapped out, Seck continued to attack with impunity putting Kwan down to 17.

Seck follows with a Leonin Den-Guard and a Leaden Myr. The Flayed Nim begins the offensive for Kwan with 2 as on the 5th turn he drops a Pewter Golem. Not one to be afraid and noting slightly better tempo than Seck he sends in all his men, happy to trade to Soldier Replica for the regenerating Golem. Kwan then took to the air with a Nim Shrieker, coming down as a 1/1. Again with impunity, Seck attacked scoring 1 point of damage 3 times, with Chris countering with a Myr Enforcer, and an all-out attack of his own. With the Enforcer Shattered in the combat, the damage from Chris dropped Seck to a mere 6 life.

Holding 1 Myr back this time Seck came in for another 2, before summoning a Pewter Golem of his own. With a slender lead of 7-6, Kwan deconstructed the golem spilling his extra mana into a Vulshok Battlegear. The Battlegear landed on the Nim, giving it the 6 power, just enough to put him over the line. 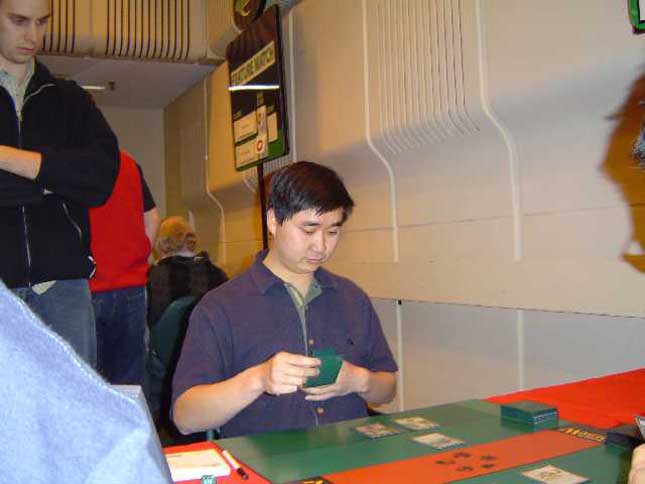 Seck, as the primary gamer, elects to mulligan. After looking at the next 4 land coming to add to the 5 hand he currently was satisfied that that was the correct choice. Shuffling out a new hand of 6 cards he studied them carefully.

Just one land…. After much thought he throws in his hand and heads to 5 cards…..

Kwan doesn't even cut this time - Seck is doing enough. He has a slow hand, but will now happily keep it.

With 2 lands, 2 equipment and a blinding beam, Seck proceeded with a land and a Myr and a Vulshok Battlegear, with Kwan responding with a Myr of his own. On the third turn, Kwan Deconstructs the Battlegear, gaining the double green mana needed for Glissa Sunseeker.

With another equipment and a Goblin War Wagon in hand it seems that all is lost. Off a double mulligan…. The pain… As the consumate showman however, Ben offers a draw….. Hey, you've gotta ask, right?

Cast a Pewter Golem, stopping to destroy the War Wagon with Glissa - Attack

Cast a Myr Enforcer, stopping to destroy the Vulshok Battlegear with Gilssa - Attack

The dream of a third Grand Prix for "The Ben Seck" has ended…. Well, at least for this tournament.