Round 8: Blasting Out The Warrens

the players sat down in the feature match area, two of Germany's hottest young stars sat side by side on one side of the feature match table: Sebastian Thaler (formerly known as Sebastian Aljiaj) was facing down Quentin Martin, and Jan-Moritz "J-mo" Merkel, winner of PT - Kobe, was pitted against French player Guillaume Wafo-Tapa. Both players came into this round at 7-1 and still running strong.

Play began on Jan-Moritz's side with Ashcoat Bear and Call of the Herd. Guillaume had an answer of sorts in Orcish Cannonade and Magus of the Scroll. But with two 3/3 elephants, Jan-Moritz looked to be in good shape. Nothing happened while Guillaume was lost in thought, finally passing the turn but already not looking very appreciative of the situation.

Magus of the Scroll blocked a Call token without trying to deal the final two itself. Instead, Guillaume decided to play it safe and kill the token with another Orcish Cannonade. He returned the other elephant into nothingness with Temporal Eddy, but J-mo still had the board advantage: His Greenseeker was laying on the beats, joined by Vhati il-Dal. 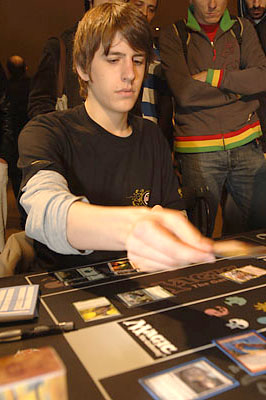 J-Mo keeps up the pressure.

Guillaume tried to fight back with a Pardic Dragon - a big dragon indeed, but Vhati can make even that one tiny. Jan-Moritz finished Guillaume's only hope with a Grapeshot. Now on 4 life, the French player desperately played Walk the Aeons. Sprite Noble and the elephantine half of Assault // Battery tried to help him out, but Jan-Moritz revealed Tromp the Domains and that was more than enough.

On the back table, English sensation Quentin Martin took a one-game lead over Rookie of the Year hopeful Sebastian Thaler while Merkel and Wafo-Tapa declined to sideboard.

No mulligans, and they were off with Guillaume making Looter il-Kor and Jan-Moritz bringing on the Greenseeker beats. Grapeshot did away with the Looter. Jan-Moritz proved trigger-happy when he killed Guillaume's newly cast Uthden Troll with yet another Grapeshot off a Chromatic Star. Guillaume was tapped out of regeneration mana, but recovered nicely with Magus of the Scroll and a mystery morph.

His jaw muscles working, Guillaume thought long and thoroughly about casting his Prismatic Lens, taking the first two life out of Jan-Moritz's chunk with the following attack. Morphing Fathom Seer up and replaying a land gave Guillaume Empty the Warrens for four Goblins. It was the German's time to get a move on and do more than just Weatherseed Totem. Jan-Moritz summoned Thallid Germinator, the card his Kobe finals opponent Willy Edel would have dearly liked to draw five weeks ago. 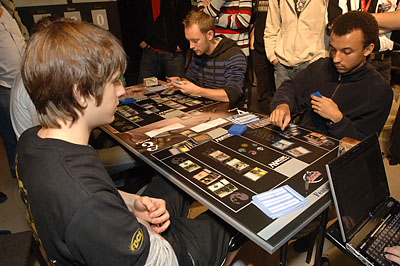 Guillaume had Temporal Eddy on the Germinator, taking Jan-Moritz to 13 with his little army. But while Jan-Moritz got constant uses out of his Greenseeker, Guillaume had so far declined to try for at least some shots with his Magus of the Scroll. Jan-Moritz activated his green Totem, and Guillaume reached for his pen to note down the change in life totals. After what seemed like an eternity to the spectators, Guillaume went down to 12, struck back for 6, and Temporal Eddy'd away Jan-Moritz's only true creature, the Greenseeker. Jan-Moritz attacked with Weatherseed Totem and put down Greenseeker again. Alas, the noticeable lack of blockers on the German's side made him to go to one life, and Guillaume had the Orcish Cannonade to force a decider.

While the players were immersed in their pregame procedure and Guillaume nodded agreement to his hand, at the other feature match table, a mighty huddle of judges and players congregated around head judge Jaap Brouwer. I couldn't see what happened there, but here I saw that Guillaume started off with a face-up Fathom Seer against J-Mo's indentured Greenseeker, apparently contracted to make three appearances a match, no expenses paid.

Fathom Seer cracked in for a mighty one, and Greenseeker did his digging work once only to fall victim to an Orcish Cannonade from Guillaume. Someone really loaded that other volcano-ball, manifesting as an Uthden Troll on Guillaume's side. Jan-Moritz had literally nothing except five lands across three colors, while Guillaume pressed on with a morph. 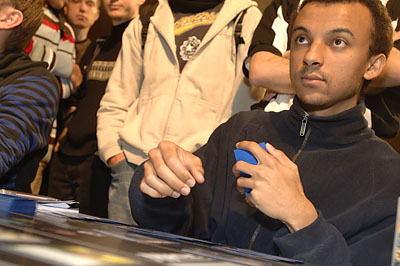 A flashy end-of-turn Ashcoat Bear didn't ease the look of chagrin on Jan-Moritz' face, not even when a Savage Thallid joined the fray. The young German had - at 15 life - established a defensive position, but both the morph and the Uthden Troll came through unblocked. Again, Guillaume had Magus of the Scroll and Empty the Warrens for four Goblins, earning himself a thumbs-up from Jan-Moritz.

But Jan-Moritz had a surprise in store. At 11 life, facing down 9 potential damage, his Tromp the Domains came down and a Sprouted Saproling, Ashcoat Bear, and Savage Thallid took Guillaume to 3. Jan-Moritz had done the math and knew that the counterattack from Guillaume would only bring him down to 3 as well - but the French player stuck a wrench in Jan-Moritz's plans and a Psionic Blast in his face, taking the match and the 8-1 record.