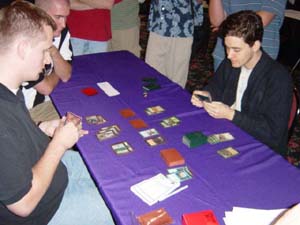 This match was heavy in tension. A "Win it, or watch on Sunday" match pitted local favorite Mark Globus versus "The Great One" (TGO) Bob Maher Jr. Everyone knows Bob, former Pro Tour Champion, former Player of the Year, Finalist at Worlds. Mark Globus however, is a name that may not be as familiar in the Magic household. Having been on the Tour several times before, this unorthodox player can be seen ripping up the Ohio Pro Tour qualifier scene with many eyecatching decks. Mark has made a top eight with Battle of Wits in the extended format, and both players wanted this win.

Before they could start the match though, a deck check was done on the players. After both decks came back clean, the match started with both players keeping their opening hands.

Bob won the die roll and played swamp. Mark came back with a forest of his own and the Giant Trap Door Spider Rider (Sylvan Safekeeper) came down with it. TGO came back with a Darkwater Catacombs, and made a Zombie Infestation, which immediately keyed Mark to what Maher was playing. After making a Plains, Globus attacked, and Maher made a token in response discarding a land and Deep Analysis. The token blocked, but Mark had his own tech, Sylvan Might. The trampling Swede hit for one, and the turn was back to Maher. After flashing back the Deep Analysis, Bob played a swamp and made an Innocent Blood, clearing the board.

The third turn of the match showed that Globus was land hosed. After forgetting to make a land, a Wild Mongrel was summoned, and the turn was sent back to Maher. It was an average for turn as he made a land and hard-cast a Deep Analysis. Mark drew a deeper wound with his Wild Mongrel, it attacked for three, and an Arrogant Wurm came dancing down the madness floor.

Maher would have no part of that. Casting Innocent Blood, then Chainer's Edict to clear the board, and followed that with a Standstill. The enchantment was broken immediately as Globus cast an Anurid Brushhopper, and backed that up with a Tireless Tribe. Suddenly, The Great One was backpedaling. All his turn consisted of was some Deep Analysis, and a land. Mark swung for four on his next attack, but Maher made a token to attempt to take down the tribe. Sylvan Might was cast out of the graveyard, and Maher made another token and madnessed out Circular Logic which stopped all of that mighty nonsense. The brushhopper met it's demise when an Edict was issued for it, and Standstill made sure everyone would take their time. Globus wanted to run through this match though, and another Olle Rade came down to break the Standstill. Joining the creature was yet another Brushhopper, and the champ was reeling. A flashbacked Edict offed the Safekeeper, and when Mark attacked into two zombie tokens, Sylvan Might was at the ready to deal more trample damage. Bob played a land, passed his turn, and readied himself for another attack with from the 'hopper.

When the Brushhopper was sent into the red zone, Aether Burst checked his name, and returned him to whence he came. The hopper was recast. Maher started some fireworks with his next turn play, putting eight mana in his pool, he cast Upheaval and floated a black and a blue mana. Globus phased out his hopper, and madnessed a rootwalla into play as well. Now, the two zombie tokens TGO made seemed awfully out classed. An attack with the Hopper left Maher with one token, and the Madnessed Rootwalla and a forest saved the beastie from lethal damage. Spurnmage Advocate joined the team, and witty mastermind Mark was in total control of the match. 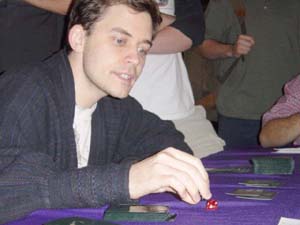 Maher made a land, and cast Compulsion. Which was answered by a swinging team from Globus. Maher made two tokens, which left him with one card in hand. Two tokens blocked the Walla, while the third blocked the Advocate. The rootwalla took out one, but Bob was now at three life. After a few futile Edict attempts and blocking with tokens, Maher fell to the awesome Green White creatures.

The second game started off with Mark lamenting about needing to play two games in twenty minutes. The complex first game saw a lot of momentum changes, and both players knew how important it was to come out the victor in this match. Both draw their opening hands, and Globus decided to take a mulligan, commenting,

"This hand would be really nice if I had a Plains."

He then proceded to flip over the top card, revealing the white mana source he longed so much for.

After looking at his new hand, he kept and watched Bob play this game by himself.

It is really hard to win a game when you keep drawing lands, and no other creatures. A second turn Tribe was blooded away, and the next play that Mark had was a hard cast Glory. By this point in time, Maher had enough mana to play a Faceless Butcher, put his come into play ability on the stack and Burst away the Glory for good. Unfourtuntly, Maher had an Edict for Globus's Phantom Centaur. Running out of gas himself, A Tireless Tribe looked to lay some beats about the head and neck of Maher. However, when the little beater resolved Mark had no control over the game and was taking incredible beats from Grotesque Hybrid, Shadowmage infiltrator and Faceless Butchers. His life was reduced to two in short order, and just when he thought he might be competitive again, ten mana a Faceless Butcher on a Hybrid and an upheaval ended his dreams of the impossible comeback.

Both players kept their current decks the same with no boarding between the two of them. As Bob had a higher tiebreaker, he asked Globus to concede. Globus respectfully declined his invite, and David Williams had a few words for that,

"Bob Maher is a great guy. He is such a great guy that he recently gave his kidney to a little girl, so why have you not conceded to this great guy?"

Mark kicked off the game after both players kept their opening hands with a Forest and a Rootwalla. Bob was knocked to fourteen by the lazy lizard before your friend and mine hit the board. Shadowmage Infiltrator was able to mill through the dead parts of Maher's deck and on fourth turn, Globus's lone Rootwalla was sent packing via Chainer's Edict, and when it was returned unanswered Bob made a hybrid. Mark returned with an Arrogant Wurm, and Rootwalla. A butcher took away the Rootwalla , and Maher struggled to find an answer to the Centaur that was ready to beat down on him. 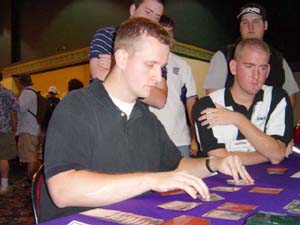 Time stopped at this point. Well not really, the nine minute extension the match got was up, and Mark took the first of five turns, beat with the centaur made a glory and passed. Butcher took away the Glory, and after the attack, Standstill came down. On the third extra turn, with both players at eight life, the Standstill was broken by Mark, and a Brushhopper came down. A Demise tried to seal the win for Maher, but the hopper was phased out and replaced by an arrogant wurm.

Maher needed a huge rip. With eight power worth of creatures on the board, he needed a way to deal with the Centaur and the Wurm. Sighing, he ripped the top card off his deck, looked at it and said.

Final Result: Bob Maher wins the match 2-1 and is one of the many 6-2 players to make day two.