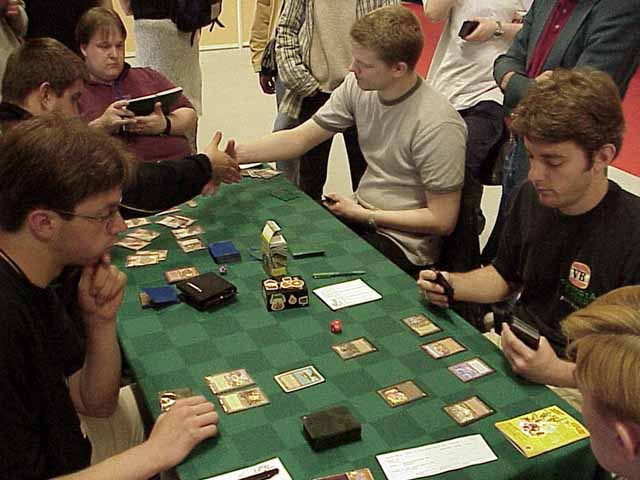 The reader who has been reading these feature match reports earnestly will have met Bram Snepvangers before. His deck is a very interesting multi-colored Pattern of Rebirth deck with utility creatures. Trey Van Cleave has the Angry Hermit deck, a Red/Green deck with burn, and the Hermit/Poacher engine. He also has a small splash of white for enchantment removal. He is well known for his success in Grand Prix events - he has won in both San Francisco and Philadelphia.

Interestingly, Trey was an American until fairly recently. He moved to Denmark where his girlfriend lives only a short time ago.

Bram wins the die roll and goes first. He busts out rapidly with a Llanowar Elf and a Yavimaya Elder, Trey summons a couple of Elves himself. Bram attacks and sacrifices the Elder for it's land fetching abilty. Unfortunately he forgets about it's other ability and takes a Warning for forgetting to draw a card. Trey brings out his decks key card, a Deranged Hermit. The next turn is a big one. Bram enchants his Bird of Paradise with a Patten of Rebirth, and when Trey attacks, the block by the Bird allows him to fetch an Ascendant Evincar. This card is insane against Trey's deck as it kills virtually everything- Hermits, Elves, Priest of Titania, etc.

Trey draws an answer for the Evincar quickly in the form of Arc Lightning, while Bram plays out a Phyrexian Plaguelord. When Bram plays Diabolic Servitude on the Evincar, the game is over.

As if game one wasn't batigs enough Bram has more great answers in his sideboard. He brings in three Defense of the Heart which will allow him to fetch his Evincar if Trey plays too many creatures (or a single Deranged Hermit), an Engineered Plague, and another Evincar. Van Cleave brings in some enchantment removal which he hopes will help out against the Pattern.

Game two sees a fantastic start by Trey who manages a turn three Plow Under with the help of his Elf and Gaea's Cradle. While he brings out his Deranged Hermit next turn Bram has nothing but a single Treetop Village and a Bird of Paradise. Trey attacks, and Arc Lightnings away the Bird, and Bram gets shuffling for game three.

Both players draws are okay in game three. Van Cleave has drawn a couple of his enchantment removal cards and some good fast mana to go with his Plow Under. Bram isn't so badly hurt by the turn four Plow this game, as he brings out an early Vine Trellis and Bird of Paradise. Still, it looks quite good for Trey as he brings out a Deranged Hermit. Bram's deck is full of answers though, he Vampiric Tutors for the Ascendant Evincar again, which he can cast with the Phyrexian Tower in his hand. Trey needs an Arc Lightning to kill it but doesn't draw one and is forced to concede four turns later with nothing but enchantment removal in hand