Round 8: Brian Kibler vs. Christophe Haim 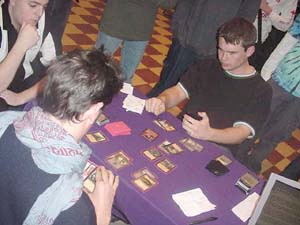 Brian "Dreamboat" Kibler is one of the more prominent players in Magic today; not only is he a respected deckbuilder, internet writer, and the man who ushered Dragons into Standard, but he is also the only known Pro Tour regular who has a fan website that talks about how good-looking he is.

Christophe Haim is well respected for his skills thanks to Top 8s at Pro Tour Osaka and Grand Prix London, as well as his excellent finish at the Euros, and is one of a handful of European players to make Grand Prix: Philadelphia. Word on the street is that he's in America for a month to playtest and to learn to speak English better; he's staying with internet bad lad Peter Szigeti, which would make for a fascinating linguistics course by anyone's standards.

Kibler rolled a twenty, Haim rolled a nine. Unsurprisingly, Kibs chose to go first. They wished each other luck and began with the match.

Kibler kept, while Christophe agonized over a two-land hand with a swamp and a plains, but decided to keep.

Kibler started off with a Lightning Rift, then placed a face-down morph on the table. Christophe laid a morph of his own to match it, having kept up on land. It looked like they were going to trade morphs and come out even... But Kibler transformed it into a Grinning Demon, grinning widely himself.

Haim summoned a Shepherd of Rot, and Kibler reminded him - perhaps hoping to stem the pain of his own Demon - that the Demon wasn't a zombie. Haim quietly laid another morph.

Kibler cycled a Disciple of Malice to kill the morph, which turned out to be a Daru Healer - but Haim, unfazed, attacked with the Shepherd. Kibler Shocked the Shepherd, showing more removal than any Limited deck should have a right to have.

Kibler's morph was met with a Cruel Revival, destroying a Charging Slateback.

Haim was having no problems finding land after a potentially-stuttering start, thankfully, and used six mana to summon a maindecked Anurid Murkdiver; Kibler cycled his Solar Blast and funneled a mana through the Lightning Rift, killing the third creature in three turns. He summoned a Screeching Buzzard the next turn.

Haim laid a morph and a Nantuko Husk; thanks to his own Pacified Grinning Demon, he was down to nine. If Haim could stall... Kibler cycled a Dirge of Dread in order to give his Buzzard Fear, killing the Husk, then cycled a Barren Moor to kill the False Cleric. Haim chuckled, but weakly; five creatures in a row had died to Kibler's amazing blaze of removal.

And yet Kibler was winning the battle but losing the war. He was preventing Haim from mounting an effective defense, true, but Kibler's offense was mostly 2/2s and 3/2s, and he was taking the hit at the beginning of every round. If he couldn't kill Haim quickly - or find some way to dispatch his own precious Demon - he'd fall to it.

Haim summoned a lone Catapult Squad; could it stall long enough? Kibs attacked with the Buzzard, then laid another life-draining Wretched Anurid, letting the entire world know that he wasn't afraid to die to his own critters.

For a lark, Haim Pacified his Anurid, too... And now, Kibler wasn't laughing. He looked at his hand and the board closely, knowing that he was at seven to Haim's twelve, but would lose two life each upkeep and another life any time a creature came into play. He Pinpointed Avalanched Haim's Squad, then topdecked nothing. 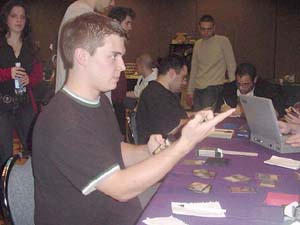 Kibler went first and kept... But once again, Haim was looking at a two-land hand, this time both plains. Kibler cycled his Barren Moore and laid a Mountain.

But Haim drew a swamp just in time to lay a Wretched Anurid of his own; Kibler responded with a Morph, his 2/2 looking mighty small in the face of the 3/3 Anurid. But was it The Demon, which seemed to have so much love for Kibler that it leapt eagerly to the top of his deck for every match?

As it turns out, 6/6s - no matter what tribal affiliation they have - love Kibler; it was indeed the Demon, and Haim's False Cleric fell to it. But reenacting history like a bunch of Southern soldiers flailing about in the fields of Gettysburg, once again Haim Pacified it. He laid a Shepherd of Rot, while Kibler flipped a Battering Craghorn.

Haim laid a Nantuko Husk, always a dangerous card in this format, and potentially blunting some of Kibler's copious removal. Yet Brian's hand seemed slower than last round's amazing flare of damage, though, absent of any Lightning Rifts or Shocks. Instead, he laid a Screeching Buzzard, presenting a slow clock.

Haim hesitated briefly before attacking his Anurid, turning it back and forth but not letting his fingers slip off of it - before he finally twitched the Husk into place next to it and flicked them forward. The Craghorn nearly first-struck the Anurid out of existence, but it was sacrificed in the nick of time to save the Husk from the Buzzard. 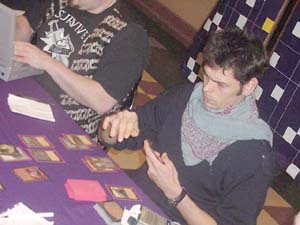 He laid Catapult Squad and J. Random Morph. Brian shrugged and sent in the Slateback, which Haim met with another shrug, throwing the Squad in front of it. Life totals were two to seven now... And Haim attacked, presenting damage that, no matter how he blocked, would still leave Kibler as demonfood the next turn.

Wisely, Kibler packed it in.

Kibler had a Misery Charm, and he could have removed the Shepherd awhile back, as it turns out... But he was hoping to save the Charm for something else, drawing into his copious pocket of removal spells.

Brian had kept the Demon in despite the two Pacifisms mainly because he realized that Haim had a much more combat trick-heavy deck, with Inspirit and a lot of ways to protect creatures... And the vast majority of his other guys were 2/2 dorks. He had gambled that if he had gotten an early Demon down, and Haim didn't have the Pacifism, he would have been able to ram through with such power that he'd put Haim on the back foot for the late-game, where otherwise he'd be able to pull out the win.

As it turns out, it was a gamble that failed; Haim did have the Pacifism, and Kibler discovered that even a 6/6 can turn on you.