Round 8: Brian Kibler vs. David Rood 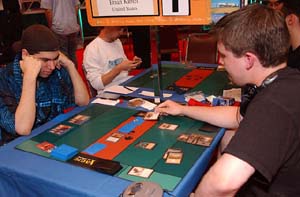 There were some snickers in the back room over Brian Kibler's first pick Battlefield Medic but the Dragonmaster is confident in the cleric archetype. He looks very confident clad in Superman t-shirt with his high-end headphones blaring what could be virtually any style of music. Rood is also confident and no one is making fun of his first picks in Onslaught—Exalted Angel and Insurrection.

Rood was forced to mulligan his opening hand but kept the next six. Both players laid Plains on the first turn but Rood seemed to anticipate Kibler's deck when he announced a Swamp during Kibler's upkeep. "Shocking," grinned Kibler as he played a Starlight Invoker. Rood was scooping up the soldiers that Kibler was forgoing and he played a Gustcloak Harrier and a Dive Bomber on the next two turns. The game was shaping up to be a Soldiers vs. Clerics damage race with 4 in that air racing fourth turn Vile Deacon and fifth turn Daunting Defender when Rood unmorphed an Exalted Angel on his sixth turn and flew over for 8 damage and gained four. "That card cost me soooooo much money at Masters," grinned Rood. The life totals were Rood = 15 and Kibler = 6.

Kibler did some quick math and was sporting a grin of his own. He played a Crown of Suspicion on his Daunting Defender and attacked with it, Starlight Invoker, a 5/5 Vile Deacon and a morph. Rood had no blockers and Kibler sac's the crown to give all his clerics the bonus and he dealt an unexpected 17 damage to the stunned Rood. "Exalted Angel my ass!" proclaimed Kibler. When told of the play Randy Buehler concurred, "Exalted Angel is no Crown of Suspicion!"

There were no mulligans this time and Rood played a third turn morph as did Kibler. Dive Bomber and Vile Deacon were the fourth turn plays and Rood dealt first blood with his flier and followed it up with Snapping Thragg. Kibler played an Akroma's Devoted and sent his Vile Deacon upright into the red zone. 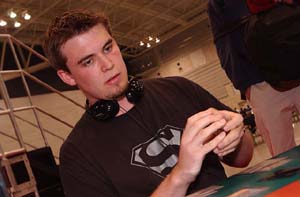 Rood sent his Thragg and a morph at Kibler. The Dive Bomber stayed back to deal with the Deacon. Kibler put his morph and Devoted in the way of the beast and it ate the mystery man—a Wingbeat Warrior. Rood followed up with a pair of morphs. Daunting Defender negated the Dive Bomber and the Devoted and Deacon—can you call it swinging if they don't tap?—swung into the red zone.

Rood kept the pressure on Kibler and swung with three morphs and a Dive Bomber. Kibler thought long and hard about his blocks and went over the math multiple times before putting a Daunting Defender in front of one morph and Akroma's Devoted in front of another. Letting a morph and the flier though unimpeded. "No Searing Flesh for you!" exclaimed Kibler."
Rood nodded, "There were sooooo many in that draft."

"I passed two of them and I have no desire to fall to six," Kibler elaborated. Rood tapped all of his mana and unmorphed the guy the Defender was blocking—a Rockshard Elemental—obviously annoyed that that wasn't the morph that got through but happy to kill the annoying 'Double D'. The race was now Rood = 9 Kibler = 8.

Whipgrass Entangler gave Kibler a burst of adrenaline for the race and Devoted and Deacon went into the red zone straight up for seven more points. Rood = 2 Kibler = 8.

Rood played a Goblin Sledder and announced his attack. Entangler requested that Dive Bomber and Rockshard pay 3 mana each to attack and the Elemental obliged. Kibler had to give up a cleric and he made the face of unpleasant choices before deciding to give up his Deacon, which the Dive Bomber could take care of anyway. Rood played a Sandskin on the Devoted and passed the turn.

Kibler clearly had something up his sleeve when he attacked with his Sandskinned devoted and Rood wasn't taking any chances. He double blocked and Kibler just shrugged and let them bounce, saving whatever he had for later and played out a morph.

Rood was concerned about the Entangler and was playing out all of his lands leaving him devoid of cards in hand to mount a bluff. With the Deacon gone he was able to get in for two with the Bomber and took Kibler to a tantalizing six. Kibler couldn't break through and played another Deacon rather than trying, which prompted a "Dear God" form Rood. A Battering Craghorn was unveiled EOT. 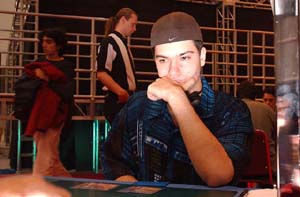 During his next turn's upkeep Rood invoked the Canadian patron saint of topdecks with a, "C'mon Fung!" his deck only offered Mountain, which he played to keep up with the Entangler. Kibler played Sootfeather flock.

Rood was finally rewarded with a topdecked Crested Craghorn, which traded with the Entangler. Kibler had been holding the Cruel Revival—it was his ace up the sleeve when he attacked with the devoted earlier—and killed the Dive Bomber and finished off the young Canadian.

Rood nodded, "That is the deck I wanted to draft. I was talking with Hoaen last night and he asked what do you do in this situation. 'You have first picked Cruel revival and the second pack has Battlefield Medic and Barkhide Mauler. What do you take?'

Kibler: "You take the cleric, clearly!"

Rood: "Not many people would do that but Hoaen went 7-0 with that strategy yesterday!"