It was sudden death for Italian Mario Pascoli and German Sebastian Thaler as they sat down for the final match of Friday competition. With just 12 points each a loss meant either would have to go home instead of showing up to play for Day 2. The players quickly fell into the motions of their pregame, with Pascoli winning the die roll. 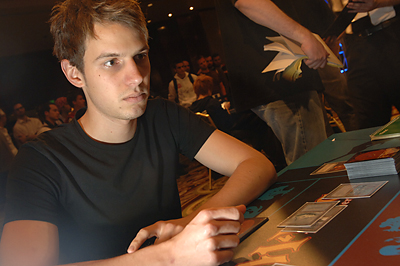 Sebastian Thaler faces a tough matchup in the final round of the day.Mario opened on Mountain and Magus of the Scroll, revealing a Red Deck Wins strategy. When his opponent laughed, Pascoli teasingly asked “Good matchup?” After Thaler simply made a Faerie Conclave for his first turn, it became apparent that it was indeed a good matchup... for Mario. With Thaler’s Faeries deck playing into his opponent’s strategy by damaging itself via Bitterblossom and playing paltry creatures that couldn’t survive the plethora of burn spells in Pascoli’s deck, it wasn’t looking good for Thaler, and he hadn’t even played a second land yet!

A flurry of Keldon Marauders and attacks left Thaler at 13, but that didn’t make him shy away from playing a Bitterblossom after using Terror to K.O. the Magus of the Scroll. While the Blossom was sure to become a liability in the long term, Thaler recognized he needed to focus on the short game and crawl into a position that would allow him to actually reach the late game. There would be time to find a Clique to champion his Bitterblossom; for now he needed to answer Pascoli’s army.

“Is this a bubble match?” shouted Antonino De Rosa from the peanut gallery in his usual animated style. The American, formerly of Italy, has been known to work with his former countryman Pascoli and was one of Mario’s biggest supporters at Pro Tour–Kuala Lumpur where he burst onto the Pro scene to the tune of a second place finish.

After additional attacks and a burn spell or two, Thaler dropped to 5 life from his Bitterblossom while Mario sat back to play draw-go. With the tribal enchantment serving as a win condition by chipping away at Sebastian’s life total, the Italian could afford to sit back building up his mana base and conserving burn spells. Eventually, he knew, Thaler would have to spend four mana to remove his own Bitterblossom via Cryptic Command or Mistbind Clique. At that point, Pascoli could simply overwhelm the German’s resources with any combination of instant burn effects sealing the deal.

Still, he decided to flinch first by making a Mogg Fanatic, which was met with Spellstutter Sprite. When his opponent followed up with Scion of Oona tapping out, Pascoli sent an Incinerate at Thaler’s head. That left the German at just 2 life, which became 1 on his upkeep. Sebastian drew his card for the turn, checked to see if he had a way to remove Bitterblossom, and conceded.

Sebastian proceeded to open up the game with a Secluded Glen, revealing Mistbind Clique, and suspended Ancestral Vision. That did not please Pascoli, who rolled his eyes towards the heavens, presumably questioning why he had to face the good matchup that happened to have the strongest start against his deck. Thaler made things worse with a second-turn Bitterblossom, promising to trade some early life points in order to gum up the ground. 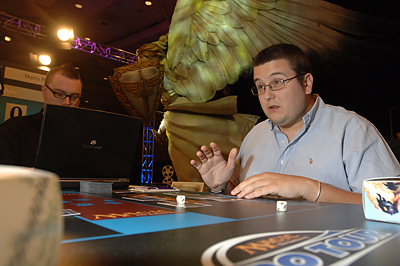 PT–KL finalist Mario Pascoli closes in.Still, Pascoli didn’t back down with an aggressive start of first-turn Tattermunge Maniac, second-turn Keldon Marauders. When Thaler tapped out to attempt a Scion of Oona, Pascoli had to consider his options. At 13 life, his opponent was entering the kill zone, particularly with Bitterblossom on the board. The Italian knew from the Secluded Glen, however, that his opponent was holding Mistbind Clique and simply needed to hit a fourth land to end the slow bleed of life. With an Ancestral Vision set to resolve, that scenario seemed highly probable, so the question was whether or not the Scion merited a burn spell moreso than his opponent’s head.

Eventually Pascoli shrugged and opted to send an Incinerate at Thaler’s dome, taking advantage of the fact that Sebastian was tapped out. That Pascoli had a supended Rift Bolt, leaving his opponent at a virtual 6 life (13 minus 3 from Incinerate, 3 from Rift Bolt, and at least 1 from Bitterblossom), no doubt helped make that decision easier. Meanwhile Thaler was having even less difficulty making his decisions. He needed to get rid of the Bitterblossom, and fast, so during Mario’s next upkeep Sebastian attempted a Mistbind Clique. That prompted a Flame Javelin from Pascoli before he was tapped out. The Italian drew for the turn and passed, with his opponent at a very precarious life total. Thaler took the brief reprieve to make a Bottle Gnomes and a big attack that left the Italian at 8 and dead on the board the following turn.

It wasn’t to be, however, as Pascoli drew his card for the turn and revealed a Flame Javelin. Out of counters, Thaler could do nothing but extend his hand in defeat, resigned to his fate of sleeping in on Sunday.

4 Magus of the Moon 4 Rift Bolt