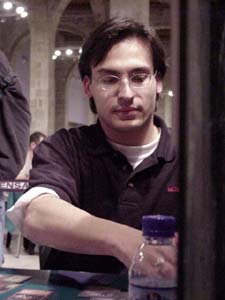 Diego Mata is a very visible example of how it only takes a little bit of commitment to be able to play amongst the pros. He is yet undefeated as is his opponent. He started out with three byes through a trial at Santander, Spain. And as you may have guessed until now he is flagged.

Carlos Villota on the other hand only had one bye and is also undefeated.

This should be an interesting game to watch.

Either one of them could take a loss but it wouldn't hurt to have a perfect record for day two.

Diego started with a turn one Mossfire Egg to cast a Cartographer on his third turn. Carlos cast his own Organ Grinder, which got immediately Firebolted. He then cast Chatter of Squirrels to join his Cartographer. Villota played another Organ Grinder that got afflicted the next turn.
Carlos was facing four points of damage each turn and cast a Rabid Elephant to counter his opponent's offensive. A Nimble Mongoose then joined the army of small but many creatures.

Villota summoned a Barbarian Lunatic. Mata killed the Elephant with the Cartographer and a flashbacked Firebolt. On the other side a Gravedigger hit the table to recover the Elephant. But all this could not match the Roar of the Wurm cast by his opponent. Not all was lost though since he was able to cast a Zombie Assassin to try to handle the Wurm.

Diego thought for a while and attacked with his Wurm and no blocks were declared. A Blazing Salvo targeting the assassin was a tough nut for Carlos since he only had seven life left but in the end he decided to take five damage and went down to two. Mata cast his own Zombie Assassin and ended his turn. The situation on his opponent's side was looking a little bit grim with a Lunatic, a Gravedigger and a Zombie. But he tried to hang on by casting a Squirrel and a Nantuko Blightcutter.

When Mata attacked his Wurm got removed by the Zombie but in fact in was no real problem since he recast another Wurm. Villota was struggling to hang on to his two life so he cast another squirrel and passed his turn.
Mata used his Torturer to kill the Lunatic that killed the Torturer himself. Then he pounded with his 6/6 Wurm on a Gravedigger and a Squirrel. Carlos then cast a Sonic Seizure to deal the remaining three damage to finally kill off the Wurm. During his turn he cast Caustic Tar putting Diego on the clock. Mata drew a Flame Burst, and finished his opponent off.

Mata took a mulligan and went first, which meant an awful card disadvantage for him, while Carlos kept his opening hand.

Firstly a Cabal Torturer hit the table on Diego's side after having missed a land drop but it got immediately afflicted and an Elephant soon followed for Carlos.

Feeling it was not enough, Villota cast Acorn's Harvest twice to join his Elephant.

Mata was not going down without a fight and killed the elephant with a Firebolt and a fatigue.

Diego then payed three life to use his Fatigue and kill a freshly cast Chainflinger. After an attack he was down to five life. Carlos cast nothing fearing some sort of retaliation on his opponent's side. Mata faced three squirrels and a Twigwalker so he used his Firebolt to kill the Walker and went down to two life. Carlos wanted to finish the game and summoned a Zombie Assassin. Mata cast a Nimble Mongoose, another squirrel and killed the Zombie with a Fiery Temper. Ironically he died the same way he won his last game: Flame Burst.

Both decks had shown lots of good cards and solid strategies so the last game could go either way.

Mata had a good start with Nimble Mongoose during his first turn. Since Carlos had no answer by his second turn so Twigwalker joined the party. Only during his third turn did Villota have a Krosan Avenger. Diego seemed to have no mana screw that time and cast a Whispering Shade, proving to have a good mana curve or at least a good hand. His opponent cast a Krosan Constrictor but that was no match for the Rabid Elephant that stomped on Diego's side. Still, a Faceless Butcher did take care of the Elephant and put Diego back in a tight spot.

Diego attacked with his Mongoose and Flame Bursted it before it could die to the Constrictor wanting to kill the butcher. That plan had failed so he had to come up with something new. A Twigwalker on his opponent's side didn't make things easy for him, but he handled it with a Ghastly Demise. Mata made the best of what he had, attacking with the shade and the mongoose. After pounding on his deck, Carlos seemed pleased with what he had drawn but took no action during his turn.

Meanwhile Diego had an active Chainflinger on the table and was able to get past Carlos's creatures with the pumped up Shade. Carlos kept pounding his deck and got a Gravedigger for it that picked up a Krosan Constrictor to dampen the blows. At that point he was down to four life and would still be taking two damage per turn so he cast Soul Scourge.

At the end of his turn, Mata gave one damage with the Chainflinger and untapped. He then attacked for one and ended his turn. Carlos held three land and a Painbringer, which he cast. Once again, Diego dealt one damage to Carlos at the end of his turn and then again during his main phase to finish this epic battle between unbeaten Spanish representatives.