Coming in to Round 8, both Ludvig Londos and Brad Nelson were undefeated, having navigated a dangerous table 1 pod including Brian Kibler, Kai Budde and Guillaume Wafo Tapa. While Brad is now accustomed to the lights of the feature match arena, his opponent Ludvig Londos may have been a little tired after grinding in in last night's Last Chance Qualifier, which ran well past midnight.

Both players kept, and it was Nelson who got in the first play of the game with a Llanowar Elves. He had a little "Caw!" as Londos dropped a Squadron Hawk onto the table, finding two more. Nelson let out a laugh and another caw as he cast Prodigal Pyromancer. These birds would not fly for long.

"Did you go to Gothenburg last weekend?" asked Londos.

"Nah, I stayed home, chilled, had a good time." Brad looked fairly chilled and was having a good time in the feature match arena. 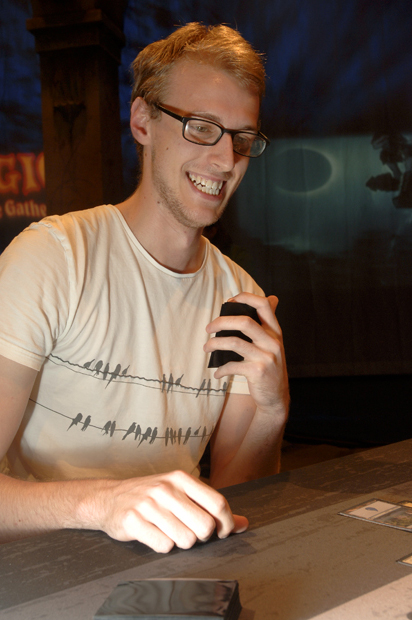 After grinding in and going 7-0 on a very short night's sleep, Ludvig Londos is all smiles.

Londos played out a Cloud Elemental, and got a single hit in with his Hawk before it was shot down in flames. Brad had a Canyon Minotaur to start attacking with, and looked pretty happy with his position.

An Awakener Druid provided the next attacker for Nelson, letting a Forest nip in hastily for more damage. While Londos had a Serra Angel, it looked a little impotent in the face of the power on the other side of the board. Londos dug with Preordain, then played an Augury Owl, looking for answers. Brad, meanwhile, had a new plan for his Prodigal Pyromancer if he ever ran out of targets on the other side of the board. Protean Hydra came down, with X=3. It could easily grow thanks to his pinger.

Plummet on Serra Angel was a brutal main-deck answer to the flyer, and with just a few swift swings, Brad Nelson put himself one game away from a perfect score for the day.

"So, are you jetlagged from travelling from the USA?" asked Londos.

"No," replied Brad. "I love to sleep. I have been sleeping all the time."

"I was qualifying for this Pro Tour."

"I once had a deck with four Squadron Hawks and a Mass Polymorph in this format. That was a fun deck," remarked Nelson, who eventually drew a Forest to allow for some Llanoawar Elves.

Prodigal Pyromancer from Nelson was soon shut down by an Ice Cage, but there was little Londos could do about Triskelion, which was a clear and present danger to his team of Birds.

Londos, however, was far from out of it. A Vengeful Archon from Londos met a small harrumph from Nelson, who tapped out for a 5/5 Protean Hydra. It got bounced by Æther Adept, and it was on to Game 3.

A quick keep came from Brad on the play, while Ludwig shuffled his hand nervously before starting with seven. Londos's turn-two Squadron Hawk was so eager to get its friends that Londos ended up having to discard, dropping a Siege Mastodon in the bin. Nelson again had the trump in Prodigal Pyromancer, and soon followed up with Juggernaut to launch into the ground and pound. 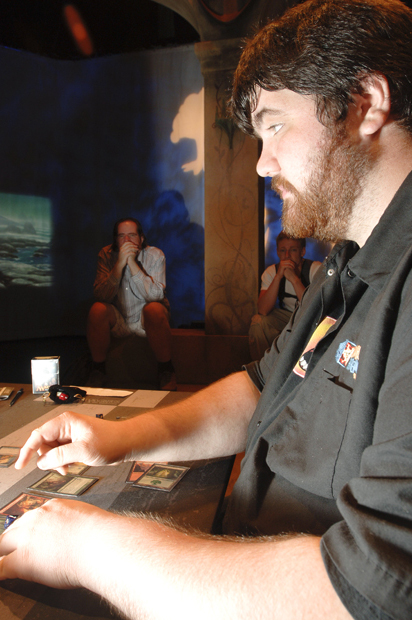 Let it never be said that Brad Nelson is not a man who loves to sleep.

After a little thought for his turn (and an attack that ate a Squadron Hawk), Brad cast a Fauna Shaman. He looked on as Serra Angel came down for Londos, and calmly cast a Triskelion on his next turn that, along with Pyromancer, tag-teamed to take the Angel down.

Attacks soon had Londos at 5, and when he tried again for a Vengeful Archon, Brad had quite the response.

"Fling my Juggernaut at you?"

Both players then slunk off for a nap—Londos because he needed it, and Brad just because he likes to sleep.