Round 8: Chris Pikula vs. Darwin Kastle 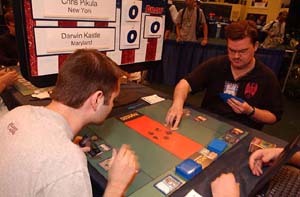 These two grizzled veterans have battled during at least four previous Pro Tours and go at it once again here at Nationals. They both have 5-2 records, but the pre-game banter reveals there may be a little more at stake.

Chris had to mulligan twice before the first game.

Chris started out with a turn-2 Crypt Creeper, and Darwin cast Rites of Spring for three, trading a Mountain, Forest, and a Swamp for the same three lands.

Chris: "Judge, he's looking through his deck. You decide what should be done."

The Creeper traded with a Nantuko Elder, and then Darwin killed Chris's Aven Fogbringer with an Afflict. Then Chris had nothing. 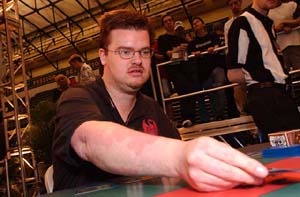 Darwin brought out an Anurid Barkripper and a Nantuko Tracer, and Chris did nothing but play land until turn 8, when he summoned a Patron Wizard and enhanced it with Strength of Lunacy. Darwin mashed it with a Faceless Butcher and Chris scooped.

Darwin: "That was a bad draw. Looks like you mulliganed to five and then drew all land."
Chris: "That would be accurate."
Darwin: "Here's where I try to think of something sincere to say."
Chris: "The sincere thing to say would be, 'Chris, I concede.'"

Neither player mulliganed in game 2, and Chris started out with traditional turn-2 Crypt Creeper, which traded with Nantuko Tracer. Then the 2/2's started coming down: Patron Wizard and Phantom Whelp for Pikula and Barbarian Outcast for Kastle. Pikula Syncopated Kastle's Patriarch's Desire aimed at El Patron, and then traded the Whelp for the Outcast.

Chris added Escape Artist to aid El Patron in his quest to counter spells, and then dropped the bomb – Amugaba.

The flying blue bus was taking huge chunks out of Darwin's life total, but then Kastle turned up the heat by Rites of Springing into threshold and attacking back with a 4/4 Treacherous Werewolf. But Chris showed why the Werewolf is so treacherous by double-Crippling Fatigue-ing it, forcing Darwin to lose his last two life points.

Game 3 started off with Barbarian Outcast trading with Phantom Whelp. Darwin summoned his Werewolf, then Chris dropped Mesmeric Fiend, choosing Sonic Seizure over Nantuko Tracer and a bunch of land. 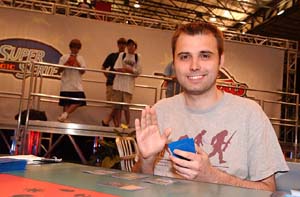 Chris: "Darwin, this draw is terrible."

The Tracer traded with Crypt Creeper, and then Chris brought forth El Patron and Aven Fogbringer.

The big surprise came when Darwin cast Living Wish and fetched a Gloomdrifter from his sideboard.

Chris: "Who 'boards that guy?"
Darwin: "I need something to Wish for."

Crippling Fatigue killed the Werewolf and the Gloomdrifter, and Chris was looking to win with Patron Wizard and Fogbringer. But Darwin drew Afflict and Patriarch's Desire, forcing Chris to go to plan B – Amugaba.

In the one turn he had, Darwin didn't draw Innocent Blood, and the flying blue bus did him in again.