Round 8: Christer Ljones vs. Jakub Slemr 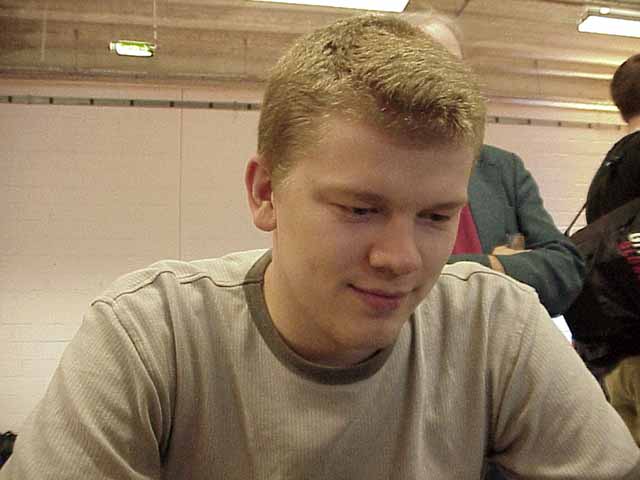 Both Christer Ljones and Jakub Slemr went 5-1 on Friday, but lost their first round on Saturday. Ljones is playing the control black deck that has yet to be played successfully by anyone in the world other than Jon Finkel. Slemr is one of many top players who chose to run Wildfire. Slemr is also one of three world champions still playing and still in reasonable shape to win money or possibly make the Top 8 today - Budde is obvious, but can you name the other? Alexandre Blumke.

Before the match Ljones was bemoaning his chances. He's somewhat of a Limited specialist and hasn't played Standard since last year's Euros. "I was disappointed to only go 5-1 yesterday, but I'll be happy with 1-5 today!" When Slemr played turn 1 Ghitu Encampment, Ljones was visibly upset. He knew his Negators made this a very bad matchup for him.

Ljones played Skittering Skirge on his second turn and Stupor on his third. That was all he got to do as Slemr smushed the poor Skirge with a Crater Hellion, echoed it, and then played Wildfire. Ljones drew one more card and didn't have any permanents left to scoop.

Ljones mulliganed before game 2 and then kept a draw with 2 dark Rituals, 3 land, and a Kill Switch. His draw improved dramatically when Persecute came off the top of his deck. "Red" resulted in a 2 for 2 trade - Slemr lost Pillage and Crater Hellion. Slemr thought he was fine as he added Monolith and Ring of Gix to his Fire Diamond and Voltaic Key. However, Ljones then Ritualed out Kill Switch and activated it. Slemr thus lost his Ring of Gix (since he couldn't produce 3 mana for the echo cost) and couldn't use all his artifacts.

Ljones had a 4th land and a Skittering Skirge on his fourth turn to complete an amazing draw. However, Slemr just played a fourth land, untapped a Monolith the hard way and then cast Wildfire! Wow - there went the Skirge and all Ljones land. He got to keep his Kill Switch but it costs two mana to activate and you can't leave it tapped so Slemr got all his artifacts back for a while.