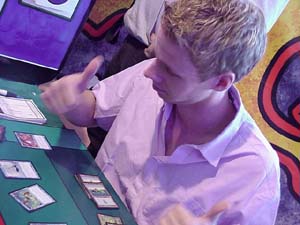 Christoph Lippert is another solid German player with multiple Pro Tour Top 32's. The Odyssey-Torment Limited season has been good for him so far with two Grand Prix top 8's, including runner-up at Grand Prix Barcelona. Raffaele Lo Moro is one of the more famous Italian players with a semi-final appearance at World's 1999.

Lippert has a black-blue deck with Torment giving him two Balshan Collaborator and two Carrion Wurm. Lo Moro has a geen-red deck with Beast Attack, Roar of the Wurm and multiple Chainflingers.

Lippert won the die roll and opted to play first. Lo Moro had to mulligan to six cards but he came out of the blocks with a turn 2 Mad Dog. Lippert tried to neutralise the Hound with Skywing Aven only for Lo Moro to clear it out of the road with Firebolt.
The Aven went back to Lippert's hand and gave him an opportunity to use Innocent Blood for no loss of his own before bringing back the Aven.

The German looked in good shape as he used Faceless Butcher to grab Lo Moro's Krosan Archer and then started attacking through the air with Skywing Aven and Dusk Imp.

Lo Moro started racing with a Crashing Centaur and then the Firebolt came back to get rid of the Imp.

Lo Moro emptied his hand to drop Rootwalla and Druid Lyrist. The Rootwalla died to Ghastly Demise which then came back through a Scrivener to take care of the first half of Beast Attack.

A second Scrivener and the Demise returned to take care of the second half of the Beast Attack.

There was momentary confusion when Lippert declared Dreamwinder among his attackers, forgetting Lo Moro had no Islands. Lo Moro thought Lippert had to attack with the rest of his creatures as they'd also been declared as attackers but if an illegal attack is declared the player has to go back and re-declare attackers. This time Lippert attacked with just the Skywing Aven and two hits from that was enough to end the game. 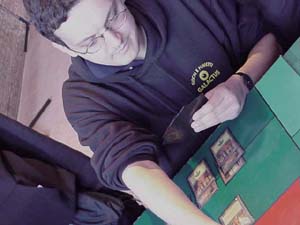 Lo Moro chose to go first and had to mulligan again. Lippert also decided his no-land hand wasn't a keeper.

Lo Moro seemed to struggling for red as he laid only Forests and a Krosan Restorer. A Peek revealed luck really wasn't with him as the only other spell he'd drawn was a Halberdier he couldn't cast.

Lippert couldn't really take massive advantage as he only had a Phantom Whelp and Skywing Aven on offence.

A Scrivener repeated the Peek to reveal Lo Moro had found a Firebolt and Pyromania but still no mountain.

By the time Lo Moro found a Mountain Lippert had found his first Balshan Collaborator and with no flying defence Lo Moro had nothing to stop big bird swooping over for the kill.