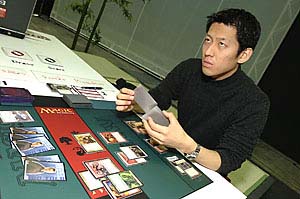 Kuroda attempts to kill Kamiel WITH HIS MIND!

Kuroda and Kamiel Cornelissen are two long-standing pros who are no strangers to events of this caliber. Their Worlds experiences so far have not gone as well as they would have liked, with both of them at 4-2-1 heading into Round 8. Still, the winner of this match would be in good shape going into the final round of the first draft.

Cornelissen won the die roll and chose to play. He thought for a long time about his opening hand but decided to keep. Kuroda, on the other hand, had to mulligan.

(Cornelissen's turns are in white and Kuroda's are in blue.)

Both players started slowly, with Kuroda's first creature being a third turn and Cornelissen's first being two Saprolings off of a on that same Goblin. With , , and , Cornelissen quickly locked up the ground, and the air followed shortly after when Kuroda's ran into .

When Cornelissen mounted his own air force and Kuroda failed to draw green mana for the in his hand, the game ended in just a few short turns.

This game was truly epic. Both players amassed an army for the first eight turns, until Cornelissen blinked first and attacked with his . With backing up a team of huge men, Kuroda was confident enough to alpha strike back, but a in response to wrecked him. With stranded in his hand yet again, he was in a lot of trouble. 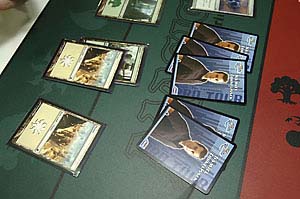 The board was full of tiny Kamiels.

Then a timely enabled the Wings to get into play and suddenly he had a plethora of Saprolings (represented by Kamiel Cornelissen player cards - at this point there were nine on the board all told, between the two players). When he attacked on the next turn, Cornelissen showed him a devastating topdeck of and managed to stabilize the board, with seven Saprolings dying in combat.

Unfortunately for Cornelissen, he forgot to sacrifice his dying Saprolings to his House Guard, which meant that Kuroda now had an opening to hit it with a sacrificing the final token. Cornelissen chose to let it die rather than eat his , although with Kuroda at 3, it was a difficult choice.

When Kuroda attacked Cornelissen to 5 and added to his board along side a Sellsword Brute that was ready to chump block the Guardian (bringing Kuroda to 1), it looked like he'd pulled out a miracle win. However, he was crushed when Cornelissen tapped three on his end step and showed , fetching up and . With two guaranteed relevant draw steps, Cornelissen snatched the game back and finished the match.