Round 8: Dan Clegg vs. Scott Richards 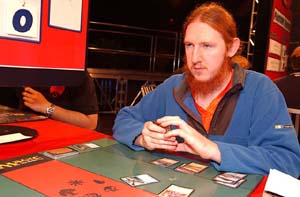 In each of the last three years, the Invitational loser has won a Pro Tour that year. If this match is any indication, a new trend might be starting - this time it's the second and third place finishers who are doing well. Very few people outside his native Uruguay and New Zealand knew who Scott Richards was before Cape Town, but he made a great run there, nearly knocking Kai Budde out of the finals before finally settling for third place. Finishing up in second, the winner but for a top-decked Tinker, was Dan Clegg. Clegg's results have been steadily improving over the years and this could be the native Californian's weekend.

Clegg and Richards each drafted blue-white decks on Table #1. Richards started strong with Hallowed Healer and Aven Fisher, but Clegg then played out one of the best white-white combos in the set: Chamber of Manipulation and Animal Boneyard. Each turn Clegg could discard a card to steal one of Richards' creatures, sacrifice it, and gain some life! Richards took a Peek at Clegg's hand and saw that Clegg also had a Rites of Refusal ready to protect his combo from whatever answers Richards might find. Richards held his Aven Cloudchaser for many turns and eventually found a Syncopate. That finally busted up Clegg's combo, but not before it Richards had lost five creatures. Richards was too far behind and Clegg had little trouble winning the game with fliers. 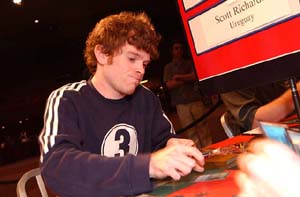 Richards once again had the fast start - Patrol Hound, Hallowed Healer, Aven Fisher - but Clegg once again had the better start. Clegg's Treetop Sentinel and Mystic Zealot held off Richard's army while Clegg's Looter went digging for more goodies. Soon Nomad Decoy was helping out on D and Aven Fisher was helping out on O and Clegg was helping himself to his seventh victory of the tournament against no losses and a single draw.