Round 8: Dooming the Dragonmaster

You may have known Fabian Thiele as the "casual" player who had some big finishes in 2011. He finished Top 20 in Paris and Top 8 in Nagoya. Thiele didn't do as well in Philadelphia but he's looking to get back to his winning ways here in San Francisco.

His opponent was Brian Kibler. A Hall of Famer with quite a list of accomplishments including multiple Grand Prix and Pro Tour Top 8s and wins. Both players sat at 6-1 after six rounds of Standard and the one round of Innistrad draft. 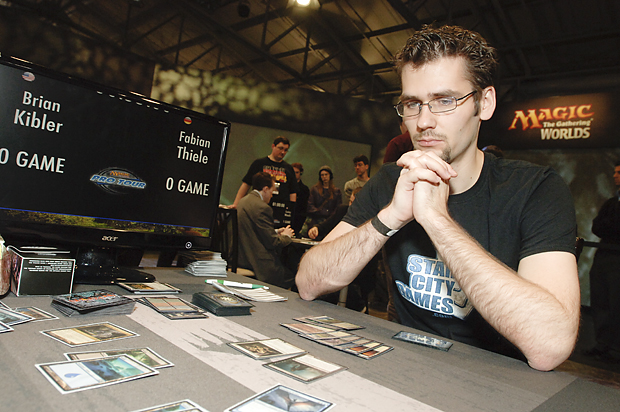 Sebastian Thiele presses on in his match against Hall of Famer Brian Kibler.

Kibler won the die roll and decided to play first. The players shook hands and wished each other luck. Well-wishes from Thiele however did not rescue Kibler from two mulligans as he began with a five-card hand. Kibler led with an Island while Thiele responded with a Plains and Doomed Traveler. Only a Swamp was added to Kibler's board the next turn. An attack from Doomed Traveler put Kibler to 19. A Shimmering Grotto concluded Kibler's third turn.

An end of turn Altar's Reap on Doomed Traveler netted Thiele two cards and a Spirit token. This was followed by Typhoid Rats and Silverchase Fox during Thiele's turn. Another turn with no play from Kibler allowed Thiele to freely attack Kibler down to 12 life. Finally Kibler contributed to the battlefield by playing Stitcher's Apprentice, although this didn't stop Thiele from attacking Kibler down to 10 with his Silverchase Fox. Thiele then added Stromkirk Patrol to his side of the board.

Kibler thought a bit before he laid a fourth land and played Moon Heron. Thiele decided that it was time to turn up the knob on aggression as he attacked with Silverchase Fox, Stromkirk Patrol, Typhoid Rats, and the Spirit token. Stitcher's Apprentice blocked the Rat and the Heron blocked Stromkirk Patrol. Kibler went to 7 and all that remained after combat was the Spirit and the Fox. Claustrophobia took care of Thiele's Silverchase Fox but he had no answer for the Spirit as it attacked for a point. Kibler was at 6 life.

Kibler used Ghoulcaller's Chant to return Moon Heron to his hand and then played Stitched Drake. Thiele played Thraben Sentry on the next turn. Kibler had no play on his turn yet, and at the end of Kibler's turn, Thiele sacrificed Silverchase Fox to both destroy Claustrophobia and transform Thraben Sentry into Thraben Militia. The following attack from the Militia brought Kibler to 1 life.

Chapel Geist joined Thiele's team while another turn was passed without a play from Kibler. Thiele attacked again with Thraben Militia but this time Cackling Counterpart allowed Kibler to double-block with two 3/4 Drakes. The token copy of Stitched Drake died and Kibler survived another turn. 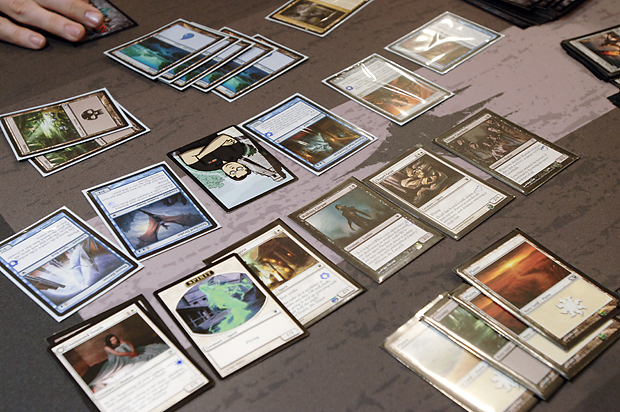 At just 1 life, Brian Kibler climbs his way back into the game, but Fabian Thiele's not out of gas just yet!

Thiele played Doomed Traveler to go up one creature. Kibler's Moon Heron and Deranged Assistant put him in the lead on creature-count. Thiele's Cloistered Youth tied things up again. Kibler added a second Moon Heron to take the lead. Thiele played Altar's Reap sacrificing Doomed Traveler. One of the two cards drawn was Blazing Torch. Thiele attempted to play Blazing Torch, but it was promptly countered by Lost in the Mist. Village Cannibals were also bounced but replayed the same turn.

With a two creature lead, Kibler decided it was time to attack. Stitched Drake soared over Thiele's ground forces, but was met with a Rebuke. Thiele drew for his turn and then played and flashed back Moan of the Unhallowed which added four Zombie tokens to his side. Kibler counted the creatures. They were ten to eight in Thiele favor.

Kibler only had one card in his hand. Would it be enough to even the creature count? No one could be sure as it was Undead Alchemeist, but it could be if Kibler was very lucky. Kibler played the Undead Alchemist, attacked with his Stitched Drake then flipped the top three cards of Thiele's library. Only one creature card was revealed and that would end the first game.

Kibler's first two turns were again Island and Swamp while Thiele's were Plains, Swamp, Doomed Traveler, and Cloistered Youth. Kibler played a third-turn Markov Patrician but it was exiled by Fiend Hunter from Thiele. The ensuing transformation of Cloistered Youth into Unholy Fiend dropped Kibler to 15 life and Thiele to 19 life.

Kibler attempted to defend himself with a second Morkov Patrician but it met a Tribute to Hunger from Thiele, who then attacked with Fiend Hunter, Unholy Fiend and Doomed Traveler. Life totals were 10 to 18 in Thiele's favor. 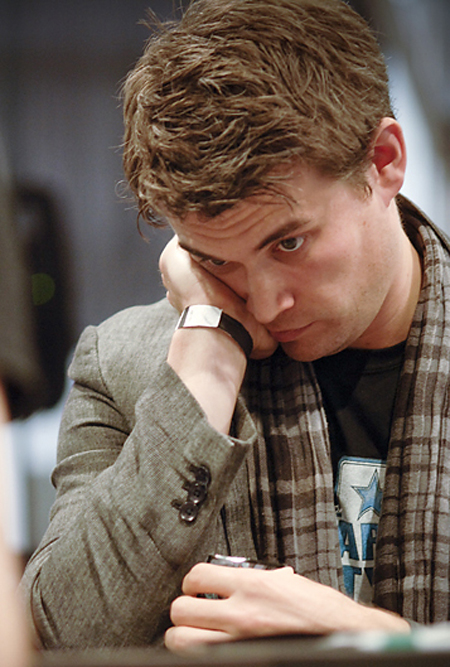 Sometimes, the Dragonmaster is going to get pinned down before he gets off the ground.

Kibler played Mirror-Mad Phantasm and hoped for no more removal from Thiele. Sever the Bloodline both dashed Kibler's hopes and exiled the Spirt. Thiele's attack dropped Kibler down to 5 life. Kibler played a Civilized Scholar and passed the turn. Thiele attacked again with his team and, with a block from Kibler, dropped his opponent down to 1 life. Kibler drew what would be his final card of the game and extended his hand.