Round 8 Draft: Drafting with Kazumasa Shiki 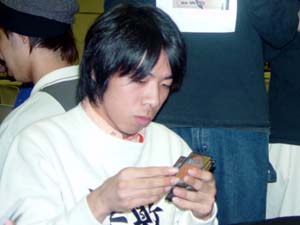 young Kazumasa Shiki has absolutely exploded on the competitive Magic scene in the past season. He came in 17th at Pro Tour New Orleans, won Grand Prix Okayama, and came in ninth at Pro Tour Kobe. With all these accomplishments he's currently leading the Rookie of the Year race, and it seems that he's poised to become one of the top players in not only Japan, but the entire world. This weekend has been no different so far, as he finished up yesterday's rounds with a perfect 7-0 record. He came in wearing a shirt that proclaimed "Undefeatable", although when joking around with friends he said he'd take it off as soon as he lost. Still, it shows that Shiki has a great deal of confidence, and is not just some rookie. He's not likely to be intimidated or crack under pressure, and he's out to prove himself once again by making the Japanese National team.

Shiki's first pack contained Goblin Replica along with One-Dozen Eyes, Living Hive, and Skyhunter Patrol. As most players are inclined to do, he took the red card and passed the green and white ones. The second pack provided a Neurok Spy, as Shiki passed Mirror Golem. Now leaning towards a blue-red deck, Shiki's third pick was extremely interesting. It contained Looming Hoverguard, Electrostatic Bolt, Myr Enforcer, Viridian Longbow, and Bonesplitter. Keep in mind that two cards were already taken from this pack, and it's even more insane than it already looks. Surprisingly, Shiki decided to take Viridian Longbow, passing very strong blue and red cards to Ken'ichi Fujita on his left. Through the rest of Mirrodin he got Serum Tank, Wizard Replica and AEther Spellbomb, along with acceleration in the form of two Myrs.

In Darksteel, Shiki contemplated taking Murderous Spoils as a first pick, but decided to stay in his colors and draft Barbed Lightning. He had a second Lightning passed to him, but decided to take Leonin Bola instead. Third pick provided a Spire Golem, and Shiki took Auriok Siege Sled over an Arcbound Bruiser fourth pick. The rest of Darksteel gave his deck a Vulshok Morningstar, Darksteel Gargoyle, Arcbound Bruiser, and an eighth pick Vedalken Engineer. Once Fifth Dawn came around, Shiki's strategy came together. He took Trinket Mage over Vedalken Mastermind, then a second Mage over Vulshok Sorcerer. Two copies of Rain of Rust gave his deck some much needed artifact destruction, and Goblin Cannon came eighth.

Shiki: I didn't draft any rares, but I got a lot of good, solid commons. I think I'll be able to put together a solid deck.

TW: First pick, you good took Goblin Replica, passing One-Dozen Eyes, Living Hive, and a Skyhunter Patrol. I'm guessing that like most players, you're looking to avoid green and white, and hoping that you can get the guy next you to draft those colors.

Shiki: I wanted to draft red-black-blue from the start. I hoped to send a clear signal by passing those big green creatures.

TW: So then second pick Neurok Spy was going along the same plan.

Shiki: I took the Spy assuming that if I did, Ken'ichi Fujita (to his left) would understand that I was going for blue.

TW: If that's the case, the third pick really surprises me. The pack was loaded, and you took Viridian Longbow over Looming Hoverguard, Electrostatic Bolt and Myr Enforcer. Firstly, I'm not so sure that's the best card in the pack, and also by passing both a Looming Hoverguard and a Bolt I'd tend to think that you're sending a really bad signal.

Shiki: I had to think about that pick for a long time. Normally you take the Hoverguard, but I was hoping to get Trinket Mages in Fifth Dawn, so I wanted to try to get some one casting cost artifacts.

TW: Is planning that far ahead to the third set worth sacrificing card quality and a bad signal?

Shiki: Well, I wanted to play blue, and I know that there are good blue cards in Darksteel and Fifth Dawn. So I was always thinking ahead to the third pack.

TW: So then I'm guessing you don't mind passing a Hoverguard, because you're just missing out on Darksteel blue if it gets cut off.

TW: I'm guessing that's the same reason you took Leonin Bola over Barbed Lightning, which I was also surprised by.

TW: Do you think that the Trinket Mage plan worked out? You've got three cards to search up, although granted two of them are pretty good (Bola and Longbow). Are you happy with the final result?

Shiki: Pretty happy. I could have gotten a few more, but it'll work.

TW: Are you playing the Ion Storm?

Shiki: Well, I was looking at it, and I thought, "Can I use it? No, probably not, but I don't want it used against me."

Shiki: I haven't done much drafting with Fifth Dawn, so I'm not sure of how strong it is. I'm going to put it into the maindeck to see how it works, and if it sucks I'll just side it out.

TW: It's a little funny that you're figuring out which cards are good in this draft. Then again, with a 7-0 record you can be a little more relaxed.

Shiki: It's all about having fun. Even though it's Nationals, it's just like, "Well, let's see if this card works."

TW: How do you think you'll do?

TW: After your past season, what are your thoughts on starting off 7-0, and how important is it to you to make Top 8, or the National team?

Shiki: Well I've made it this far, and of course I want to make Top 8, which is the same as everyone else in the room. I want to prove to everyone and myself that I'm good enough to make the team.