Round 8 Draft: Drafting with Masashi Oiso 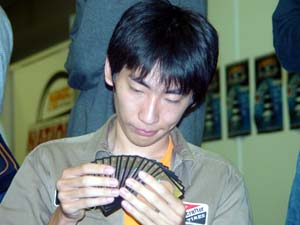 Oiso has had a hot season, making 3 of the last 6 Pro Tour Top Eights. His chances at his home country's nationals, on the other hand, are a bit long. Seated in Pod 2, he has difficult but possible odds of reaching the Championship. Sitting down between Shinosuke Hayashi and Shunsuke Kamei, he had nothing but a serious, thoughtful expression on his face.

The first pack submitted Hematite Golem, Spikeshot Goblin, Pewter Golem, and Thirst for Knowledge for his approval. Oiso mulled over his choices. By passing the Goblin, he could send a solid signal that Red was open to the right. But he couldn't pass up Red's powerhouse common, and drafted the Goblin. He then received another tough decision in the form of Skyhunter Patrol, Arrest, Bottle Gnomes, and Leonin Skyhunter. Oiso could have taken the Bottle Gnomes and kept his color options open, but he decided instead to commit to white by taking Arrest. But passing two strong white cards would haunt him later.

Oiso confirmed his path in the Plains, taking a Soldier Replica over Predator's Strike and Nim Shrieker. Raise the Alarm got the nod over Annul and Tel-Jilad Archers. He had an opportunity to take another strong red attacker in the form of Vulshok Berserker over Auriok Transmuter, but chose the tapper instead for removal. Late picks were Alpha Myr, Frogmite, and Roar of the Kha. He received back the Bottle Gnomes for his tenth pick. 2 Krark-clan Shamans and a Synod Sanctum could provide a few nice tricks, but Oiso was not thrilled with his picks. He had a strong white commitment but could pick up a nice selection of red removal in Darksteel, hopefully coupled with Razor Golems.

That hope failed to bear fruit. After a first pick Echoing Ruin, Darksteel went downhill. Oiso was quite disappointed with a second pick Arcbound Stinger. Spawning Pit, Loxodon Mystic, and Pteron Ghost were decent if unremarkable picks. A small contingent of Arcbound creatures (Arcbound Bruiser and Worker) could support his good artifact creatures.

Going into Fifth Dawn, Oiso was less than confident. He grabbed some more removal and decent creatures in the form of Arresting (Artifact Arrest), Energy Chamber, Vulshok Sorcerer, and Loxodon Anchorite, but then the packs cooled off. Barbed Hellion, Goblin Brawler, and Skyhunter Prowler would all make the deck, but Oiso was not a happy camper. He described his removal as 'minimal, but functional`.

Oiso felt he had a long day ahead of him. His deck had the early attacking goods and could easily beat any opponent unprepared for his fast early game. But his late game prospects disappointed him. With luck, he hopes to get 2 wins from the draft, but he doesn't expect to succeed.