Round 8 Draft: Venga Venga Carta Roja vs. Two on Three

Carlos Romao and Diego Ostrovich have been on something of a World Tour lately. You may have seen them pop up at European and North American Grand Prix events, with Romao putting up a big win with his team at Amsterdam. Today they are joined by Ostrovich's fellow Argentinean Matias Gabrenja to try their luck at the Team Pro Tour. Standing in opposition to them this round are Gabe Walls, Jordan Berkowitz and Mike Hron, calling themselves "Two on Three," much to Hron's chagrin. They're also finally getting to draft, after oversleeping the first round.

The South Americans won the flip, and chose to receive. Walls was more than happy to oblige.

Prowling Pangolin was enough to direct Berkowitz. Going into the draft, their plan was to have Berkowitz in two of blue, black and red. White would go to Walls and green to Hron. If the remaining color was deep, Walls and Hron would split it, otherwise one would dip into Berkowitz's colors.

Here the other half of Berkowitz's plan became clear. Gabrenja's pick of Kai indicated green-blue, and with Ostrovich looking for Clerics thanks to the mighty Elder, that meant that Romao would probably have to move to red. Walls's wheel was insane.

Ostrovich naturally moves to black for his Clerics, and Romao makes the shift to red. 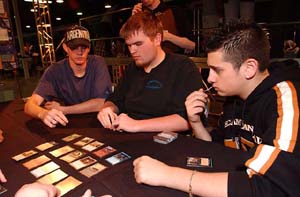 Romao is forced to cut a Brackus out of a mediocre pack. Hron picks up the possibly-outrageous Cover of Darkness, and Walls stops Gabrenja from getting Wirewood Pride in the green-on-green match. He was rewarded with The Heiss on the way back.

Another Brackus throws a wrench into the South American's plans. Maybe Romao is green after all, and Gabrenja is audibling to blue-black? He keeps a Severed Legion that might have been better in Ostrovich's pile.

Berkowitz didn't want to cut the Doubtless One, but Walls was insistent. Ostrovich doubles up on Defenders and Dirges. Not too shabby. The packs won't cooperate with Romao's green cards, though.

Not much to see here. Hron gets him self a big caboose to stop potential blue fliers and Ostrovich gets his first Deacon.

This one was busty. Ostrovich really wanted the second Deacon, but couldn't say no to Skinthinner, having no removal so far. Walls wasn't about to let him get a second chance. The Timberwatch goes to Gabrenja and Romao is now cemented in red-black. He was lucky to get the Clearcutter on the way back. Walls almost took the Avenger over Stoic Champion, but Berkowitz pointed out that it was nearly no use to Ostrovich.

Here's another case of "too many good cards". Ostrovich obviously has to take the Muse, and Gabrenja isn't about to pass on the second Timberwatch, but the Americans certainly weren't hurting for picks.

Hron needed to be shown his two Vorines to be convinced to take the Murlodont, and then Ostrovich took Starlight Invoker and let Synapse Sliver get all the way back to Berkowitz.

Berkowitz was so busy arguing Walls's and Hron's picks that he didn't have much time to make his decision. Afterwards he was kicking himself for letting the Wall of Deceit get away. Walls emphatically took the White Knight as an answer to Vile Deacon, and forced Hron to cut the Rockshard Elemental. 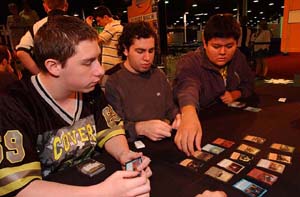 Big bombs for the Americans here. Noxious Ghoul isn't as good against Berkowitz as Romao would like. Ostrovich finally got some air defense but his pick of Mender over Devoted seems suspect.

Berkowitz was surprised to see the Aberration still in the pack when it got to Hron's pick. Of course, he was busy preventing Gabe Walls from taking the Strategist. You could tell he was eager to shout "FOG GUY!" Fortunately, Berkowitz browbeat him into the correct pick, and when the realization dawned Walls tapped his forehead in understanding. Fog guy would do no good against his Bird-Soldiers.

Walls picked Spark Spray with a gleam he later explained ("It's an answer to Wingbeat Warrior!), but the Mage was the big prize.

Not much to see here.

Lots to see here. Look at how Berkowitz gets Call to the Gravefifth. Romao later explained that he didn't want it for his deck, but felt that he at least had a chance against it with the Zombies he had. Berkowitz thought there was no question he should have taken it. They gave the Symbol to Hron on the off-chance he needed something to go with his Vorines.

The Warchief really throws Berkowitz's deck over the top, and would have done some good to Romao's as well.

The Americans were ready to get up, but then they realized they had one more pack to go. And what a pack it was! Three goodies for them, and next to nothing for the opponents. It was a demoralizing end.

Ostrovich, Romao and Gabrenja tried to keep a positive outlook. They knew Romao's match was almost a sure loss, but they felt they had play in the other two. Walls and Berkowitz were their usual models of confidence. They were surprised they'd been allowed to kick off, since that was what they wanted to do anyways, and they felt their plan had gone perfectly. They noted with smug satisfaction that they could play all their bombs, but their opponents were not so lucky. As for their predicted outcome, they were already tallying a win.

1 Call to the Grave 1 Clutch of Undeath