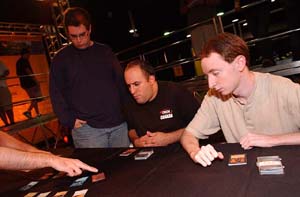 What would the ultimate Swiss round of a Pro Tour be without a tale of the local heroes vs. the big bad pros? Mike Turian, Gary Wise, and Eugene Harvey were the beneficiaries of a concession from Phoenix Foundation last round that has left them in a position to win out into the Top 4. Standing in their way are three local players--Jacob Rabinowitz, Danny Mandel, and Jeff Magid. None have anything approaching the resume of the titans that stand in the way of their shot at a Pro Tour Day 3 appearance, but they are seasoned products of the YMG machine.

Zabutan won the flip and elected to kick off, counter to early reports of the CMU strategy. While they waited to look at cards, they bantered about Team Rochester being the format that is the most rewarding for good players. "I like the format because it is rewarding for skillful play and the good players take me along for the ride."

There was the potential for an extremely exciting Top 4 with Bob Maher, Neil Reeves, and Dave Williams playing for the right to play on Day 3 one table over. Dave Williams occupies Gary's old roster spot on the team, and the possibility of the Gary getting a crack at them with his new team is a mouthwatering possibility.

About two-thirds of the way through the draft, the pressure started to show on the less experienced team. While the Zabutan team was laughing and joking as if completely at ease, Jeff was gesturing wildly to indicate that he did not understand what was going on. Danny Mandel seemed uncharacteristically frayed as well. To his credit, B-seater Jacob kept a level head and made his wingmen take the cards he asked of them with one exception. Despite having a pair of double green Elvish Warriors, Jeff wanted a Goblin Warchief. Jacob wanted him to take a Chartooth Cougar, but Jeff insisted on the Constructed powerhouse and took it despite it's double red requirement.

The other controversial pick came when Jacob opened Twisted Abomination and Bladewing the Risen. Jacob defensively drafted the Zombie and insisted that Danny take the Dragon. Danny was reluctant but ultimately more obedient than his counterpart. Jacob explained that he was concerned about two copies of Crown of Awe and wanted to give Danny an evasion creature. He reasoned that both creatures cost seven, since you always want to leave up one black for the Abomination when you play it. 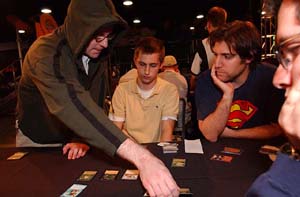 Danny was still reeling from the draft and asked, "Do you know Towly? Because I have no idea what is going on." As he and Jacob sorted through the deck, Danny bemoaned the Daru Lancers that would hold his attack at bay. Jacob flopped a pair of Frenetic Raptors in front of his teammate and yelled, "That's why I had you draft these! They are 6/6 creatures for six mana."

Meanwhile, Jeff was on the fence about whether or not to play his Lightning Rift, and overall the team seemed flummoxed about the specifics of their opponent's decks. Gary Wise, on the other hand, was brimming with confidence. "We out-opened them and we out-drafted them. They seemed more than a little overwhelmed."

Eugene seemed aggravated rather than confident, "It was obvious from the first pack that they had scouted our strategy. They took blue-black cards from Turian right away and they jumped on Misery Charm against me. I was Clerics last round but I was obviously not going to be in this round . . ."

Turian chimed in with a triumphant finger in the air, "Luckily, we are smart!"