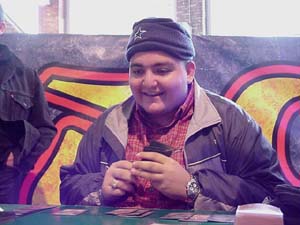 Although De Rosa is counted as an American player, he certainly has quite a bit of local support. Originally from Palermo, he speaks perfect Italian and is friends with many Italian players, and tests with players from Rome for the Pro Tour. In this draft, De Rosa ended up with a speedy red-black deck, splashing for Psychatog. Fear's deck is a solid blue-white control build. Both players have excellent decks and the winner of this match might very well take the table.

De Rosa won the die roll and opened lightning fast, summoning a pair of Crypt Creepers on turns two and three. He then cast Afflict to murder Fear's Hallowed Healer. Fear was holding some great combat tricks like Shelter and Gallantry, not to mention Psionic Gift, but no creatures – so he was forced to pass the turn after laying his fourth land. De Rosa pulled off a mondo-combo on the following turn, summoning a Dwarven Recruiter, searching his library for a Bomb Squad!

Fear's deck was mocking him. He drew a creature, but it was Graceful Antelope – while he was sitting on one Plains and four Islands. Clearly not winning this game, Fear amused the crowd by enchanting one of De Rosa's creatures with Psionic Gift. Down to five life points, Fear drew Aquamoeba which was not nearly enough to stop De Rosa's rampaging horde of red and black creatures. He scooped a few turns later, pulling out a sealed plastic bag (from a pack of sleeves) with his sideboard in it, commenting: "I hear it's important to keep your sideboard well away from your deck."

De Rosa opened with Crypt Creeper yet again, but Fear drew creatures this time and matched with a Pilgrim of Justice he sideboarded in. De Rosa cast Dusk Imp, and Fear had an answer yet again in Skywind Aven.

De Rosa attempted to force some damage through. He used Crippling Fatigue to force Fear to bounce his Aven and attacked. On the next turn he did it again, casting yet another Fatigue out of his hand. Fear answered with Shelter, taking no damage that turn. De Rosa recast one of his two Fatigues out of the graveyard and enchanted Crypt Creeper with Strength of Isolation, able to attack for six that turn. 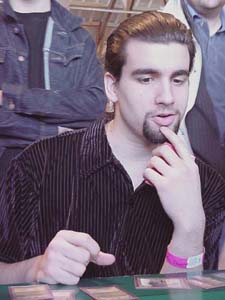 De Rosa used up his Fatigues to bring Fear down to ten life points (Fear was able to stay at a reasonable life total thanks to an Embolden), but if Fear could keep his Skywind Aven on the table he would stabilize the game. De Rosa was not about to let him do that – he cast Faceless Butcher, forcing Skywind Aven back to hand yet again.

Next time, Fear got to keep his Skywing Aven in play. De Rosa had Ghastly Demise in hand, but no cards in his graveyard now that he flashed back both of his Fatigues. With Aven Windreader joining the table Fear stabilized completely, but De Rosa drew and cast Frightcrawler – an eight turn clock – and attacked with him a few times.

Fear cast Compulsion and tapped out to cycle a card. De Rosa saw his opportunity. He cast Barbarian Lunatic and sacrificed it targeting Skywing Aven. Fear sacrificed Pilgrim of Justice to save it. With his remaining Swamp, De Rosa cast Ghastly Demise, bouncing Aven one more time and attacked with all of his creatures. Fear was forced to trade his Windreader with the enchanted Crypt Creeper and go down to two life points.

Down to one life point, Fear was able to find his Kirtar's Desire just in time to stop Frightcrawler but he was not about to recover. De Rosa used a Dwarven Recruiter to search out his Bomb Squad again. Fear hung on for a few more turns but ultimately had no chance to recover and, after losing his last few creatures to chump blocking, extended his hand.