Round 8: Eivind Nitter vs. Helmut Summersberger 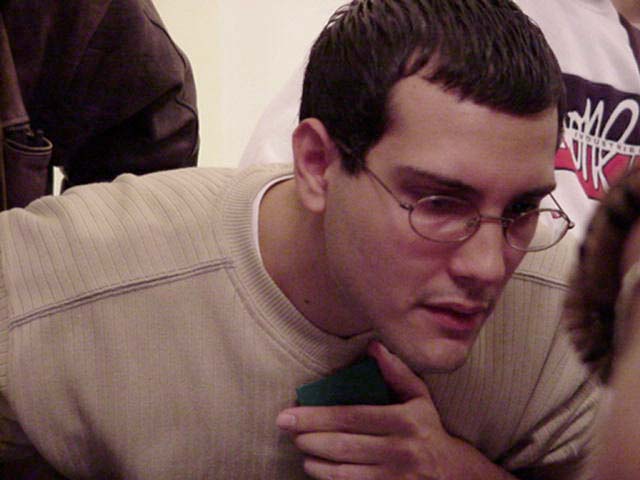 Helmut went first and played a second turn Wild Mongrel, whereas Nitter had a Werebear for his second turn. Summersberger played Seton's Desire and attacked, discarding Roar of the Wurm. This is one of the few cards of which Flashback is cheaper than it's normal mana cost, and it meant that he would be able to play it as a 6/6 on his next turn. Eivind could only manage to play a Cephalid Looter, and had to suck up a further four damage from the Wild Mongrel. Helmut then Roared and put a 6/6 into play.

All Eivind could do after looting desperately, was to play a Krosan Archer. When Helmut played Vivify to turn one of his land into a 3/3, Eivind conceded, complaining "I get a good draw and I still got killed on the fifth turn!"

This time Eivind went first and this meant he had the mana to Syncopate Helmut's Wild Mongrel. Helmut discarded two cards to find an Island and a Mountain via Rites of Spring since he needed these to cast the cards in his hand. This allowed him to play a Cephalid Broker on his fourth turn.

Eivind wasn't too happy to see the Broker, and thought for a while before using Refresh just to put a card in his graveyard to be able to use Ghastly Demise on it. He had to wait for the regeneration shield to wear off before using the Demise, of course.

Eivind did the first damage of the game by attacking with his Windreader, and Helmut attacked back with the Cartographer before summoning a Krosan Archer. The Archer was more than happy to block the Windreader, as this gave Helmut an excuse to discard his Roar of the Wurm again.

Eivind played a Cursed Monstrosity, and discarded a Forest to keep it alive after Helmut Flame Bursted it. Helmut then attacked with his Cartographer and Archer, and played the Roar of the Wurm.

Eivind was in a good situation when he used Aether Burst to destroy the Wurm token, attacked for seven with his flyers, and played a Nantuko Disciple. This turm Helmut was able to kill the Monstrosity with a Blazing Salvo, and played a second Krosan Archer. He still wasn't able to deal with the Aven Windreader though, especially not with a Disciple in play. Even better for Eivind was the fact that he knew both Helmut's hand (through Peek) and the top card of his library (with Aven Windreader). Nitter attacked with the Windreader and Tiger, Helmut thought for a while before making a hopeless chump-block that left him with nothing in play before conceding.

Helmut went first and his first play was a Pardic Firecat on his fourth turn. This was Syncopated, and then Nitter dropped a Painbringer. Helmut retaliated with a Chainflinger, meaning that Nitter would need to put another card in his graveyard to kill the dangerous looking Beast.

All Eivind did was play a Werebear, waiting for Helmut to use the Chainflinger before casting Refresh. Then Eivind did use the Painbringer. He cast Peek to show that Helmut held, amongst other cards, an Overrun. Helmut added a Wild Mongrel and a Krosan Archer, and Nitter cast a second Werebear. 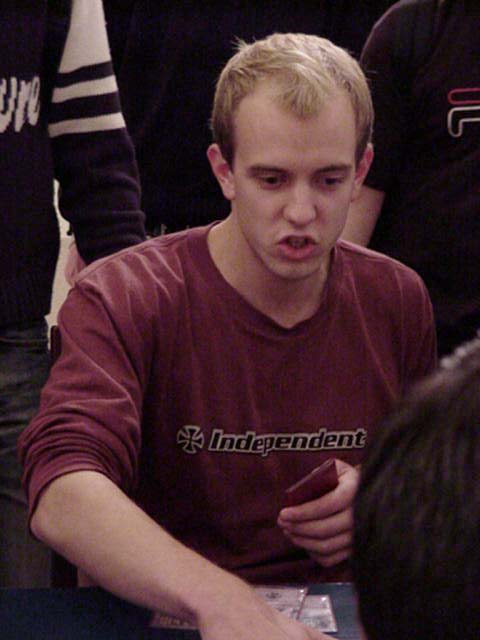 When Helmut played Blazing Salvo on the Painbringer, it was a tougher decision to keep the creature than usual for Eivind, because he didn't want to go too low on life. In the end he did take the five damage. Even with Painbringer in play, Nitter had no real way to get cards into his graveyard and even without the permanent threat of Overrun, Nitter was having a hard time dealing with the Wild Mongrel and Krosan Archer. He had to use Morbid Hunger on the Mongrel, putting himself back to a reasonably safe fourteen. His large amount of land and his Werebear allowed him to play the Flashback next turn on a Cephalid Broker, putting him to fifteen.

Helmut could still discard his cards to the Krosan Archer's ability, which looked like it would be able to stall for long enough. Nitter had to remove his entire graveyard from the game to use the Painbringer's ability to kill it. He didn't have a way to get through enough damage though, and the game was drawn.