Round 8: Eric LaFontaine vs. Antoine Ruel 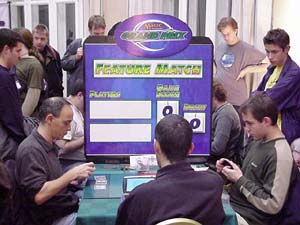 The money round. The winner makes the second day; the loser gets to complain about his bad luck at the side events tomorrow. Not exactly the place you expect to find Worlds' Top 8 player Antoine Ruel, considered by many one of the top Limited players in Europe and even in the world. But his day has been long and difficult and he now has to face his compatriot Eric LaFontaine (debuting in the feature match area and on the Sideboard pages).

Ruel's first play was a Wild Mongrel. He followed it with two Werebears and a Mystic Zealot while Louis opened with a Krosan Avenger and a Springing Tiger.

The Tiger got a Seton's Desire and Eric made his first trip to the Red Zone (a guided tour with the help of Antoine). Ruel returned the favor with a Roar Of The Wurm token that LaFontaine chumped with a Cephalid Scout.

Soon the token found a twin brother with whom to stomp around in the Red Zone while Eric scrambled to find an answer. He tried to kill one with a Ghastly Demise but a Syncopate stopped that plan at least for while. On the following turn another Ghastly Demise killed one of them but it was too little way too late.

Now at four Eric couldn't block all the attacking creatures and conceded while they jokingly discussed the benefits of 6/6 tokens.

LaFontaine got the first creature in the small shape of a Frightcrawler while Ruel played a Werebear, Beloved Chaplain and Peeked into Eric's hand (taking note of the cards). 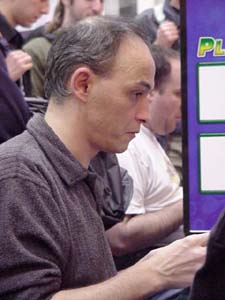 After trading a few blows Antoine tried to play an Aven Flock only to have it countered by a Rites of Refusal. Eric then killed the Werebear with a Patriarch's Desire. If his plan was to keep Antoine's flyers out of the table he was in trouble because on the next turn an Aven Windreader came into play.

Still LaFontaine found a Ghastly Demise to keep Beloved Chaplain alone against the Frightcrawler. They kept nibbling at each other until Ruel played a Leaf Dancer (getting another unblockable creature). Fortunately Eric had another Patriarch's Desire to bring down the Dancer.

An Afflict finally took care of the Beloved Chaplain but Ruel found a good replacement: Aven Windreader. In fact they both stopped drawing lands and got some decent creatures into the table for once.

The Cephalid engines got underway (Eric had a Scout and Ruel a Looter) to find a way to unbalance the game again as Ruel's Windreader raced a Frightcrawler and an Escape Artist.

Antoine reached seven mana and sure enough out came the Roar of the Wurm to give Eric a monster headache. Despite its size, it might not be enough, as the unblockable duo had Ruel on a two-turn clock and LaFontaine had several blockers including a regenerating Krosan Avenger.

With the creatures piling up and the game jitters Antoine almost forgot to draw his card on one of the turns but somehow he never forgot to send the 6/6 tokens into the Red Zone. Eric tried to cast a Twigcrawler that would have won him the game but Ruel was ready with a Syncopate.

With Ruel at one the game tensed up for what seemed the final turn and when LaFontaine went into the Red Zone Antoine tapped mana for... a last peek at the top of Eric's deck.

A Fledging Imp from Eric's side was the first to enter the table and the Red Zone. Ruel immediately stopped it with a Krosan Archers before taking a Peek (seeing Moment's Peace, Patriarch's Desire, Metamorphic Wurm and Afflict). He baited the Afflict with a Werebear before discarding the Roar. 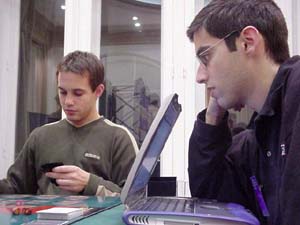 Sure enough the 6/6 came into play with Flashback on the next turn and Eric got ready for the pain dropping the Metamorphic Wurm hoping he could reach Threshold to block the token.

The first big chunk came of Eric's life while he dropped a veritable wall of creatures including a Krosan Avenger with a Seton's Desire. To make matters worse, an Aven Windreader joined in the fray. LaFontaine went into chumping mode trying to keep the 6/6 at bay as long as possible.

The Windreader was a different problem. He decided to Demise it and Ruel used an Aura Graft to steal the Seton's Desire nullifying the Ghastly Demise. A timing problem emerged with Eric wanting to answer after apparently finishing the stack.

With two Windreaders and the token riding in every turn there was little Eric could do and even his attempt to cast Moment's Peace was countered with a Syncopate. The writing was in the wall and the game was just about over. A draw and a Careful Study later Eric LaFontaine conceded to end the last round of his first Grand Prix.