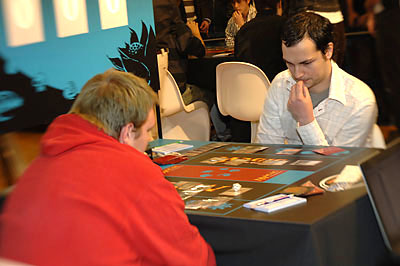 Rich Hoaen and Johan Sadeghpour are both recognized as formidable drafters.or the first round of Day 2, the feature match area was replete with great matches to choose from, with the likes of Ben Rubin, Katsuhiro Mori, Kenji Tsumura, and Takuya Osawa all battling in the spotlight. Finding a good match to watch would not be tough. Two players who are particularly noted for their drafting skills were in the feature match area too, though, with 6-1 records this weekend. Johan Sadeghpour finished in the Top 8 of Pro Tour - London, and has continued to shine in draft formats ever since. Rich Hoaen, meanwhile, has made a name for himself as being the player on the Tour who drafts more than any other, with formidable results. While he has yet to win a draft Pro Tour, he hasn't missed high money at one for a very long time.

Rich won the die roll and chose to play first. There was a quick break for a deck check, in which both Kenji Tsumura and Katsuhiro Mori won their respective Game 1s with super-fast starts. Rich and Johan watched the games, remarking on the raw power of Kenji's deck and thinking about how they might have played it.

Hoaen had a mulligan, but a turn-one suspend of Search For Tomorrow seemed a great start for him regardless. Johan, meanwhile, suspended Keldon Halbardier turn one, and followed it up with a Thallid Shell-Dweller for the second turn. The Search set up Rich's mana, giving him an Island to go along with the Forest and Swamp already in play. Hoaen played a second Island, laid a morph, and passed.

The board started to fill up, with a morph from Sadeghpour, and a suspended Halbardier. Rich's morph revealed itself to be Vesuvan Shapeshifter and copied Thallid Shell-Dweller to help on defence for a while.

Johan then played got his Shaman and Halbardier off their suspensions, and into play. He put out a Chromatic Star and attacked, getting in for just 3 with his Shaman unblocked. A dangerous Empty the Warrens seemed possible, but ultimately, Johan just unmorphed his Shaper Parasite to kill a fresh Spiketail Drakeling from Rich.

Now that this Shaper Parasite was face up, Vesuvan Shapeshifter had the potential to be a removal spell every single turn. It killed Keldon Halbardier before trading for a Conflagrate and two cards used to flash back the burn spell. Johan was looking dangerous, with his next set of attacks taking Hoaen down to 12.

When Stonebrow, Krosan Hero came down for Sadeghpour, it met with a small "Ew…" from Rich. He had the Wipe Away though, and untapped into Vorosh the Hunter in reply. 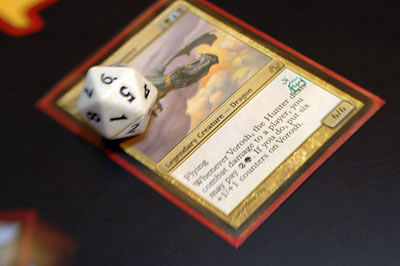 The dragon swung and went super-sized, causing Sadeghpour to suddenly look very carefully at the board before swinging. He was in a race against a flying 12/12, but he had quite the head start. He swung with everyone, and even after blocks took Rich down to 6, before making the potentially game-winning Penumbra Spider.

"That spider is unreal…" remarked Hoaen in the dry tones that have become something of a trademark for him.

Rich drew for the turn and passed. His 12/12 looked pretty solid on defence too, but for the fact that Johan untapped into Pyrohemia. Sadeghpour had enough mountains to burn for two at the end of Rich's turn, then untap and finish him off.

Both players kept their openers, and it was Rich who had the first play, with an unkicked Citanul Woodreaders. Johan played a Nantuko Shaman in reply.

"What, you can't handle the attacks?" quipped Rich.

He had a Tolarian Sentinel the following turn, which was quickly hit by a Rift Bolt so as to stop Hoaen from eventually setting up a big card drawing engine. Hoaen did have a Dream Stalker to pull his Woodreaders back one time (and indeed to block either the Shaman or the fresh morph from Johan). The Woodreaders then drew him two cards.

For the following turn, Rich played Wurmcalling for a 3/3 with buyback. With the number of lands he had, it seemed likely that he would be making ever larger Wurms for the foreseeable future.

Johan had Stonebrow, while Rich kept on his Wurm plan, playing a 4/4 the following turn. This was bounced by StingScourger, allowing Stonebrow to come in, knocking Hoaen to 14.

Sadeghpour used Mwonvoli Acid-Moss to ramp up and effectively shrink the size of any Wurms that Hoaen might call.

"Don't you want to save that for the Swamp?" asked Rich, who could at any time drop his dragon given the appropriate mana.

Sadeghpour seemed happy, though, to just play Magus of the Scroll and Spinneret Sliver before passing. He double-blocked to kill a 5/5 Wurm the next turn, only for it to be immediately replaced.

Johan's next play was a Penumbra Spider and a Grapeshot to the dome to take Rich to 12 and get down to one card for Johan's Magus. Rich simply attacked on his turn, to take Johan to 13, then made another 5/5 and got hit by Magus revealing Thick-Skinned Goblin.

When Johan attacked, Hoaen blocked with every untapped creature he had… just in case. Rich continued to get hit by Magus of the Scroll, going to 8 then 6 in successive turns, while his Wurms were simply being blocked by Johan. The Wormwood Dryad that got revealed by Magus met a "Nice draw" from Rich, suddenly very wary of forestwalk. He used Search for Tomorrow to fetch another land (intriguingly not a Swamp), played Herd Gnarr and Spiketail Drakeling, and passed.

The Dryad knocked Rich down to 3, and then Johan looked very carefully at the board, trying to work out what was going on. He hit Herd Gnarr with Magus of the Scroll, to guard against a big turn from the Canadian, and passed. 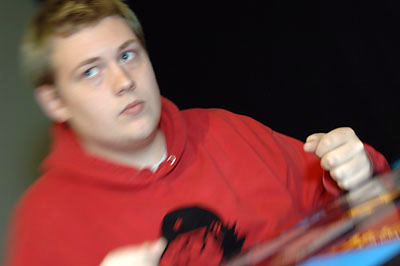 For his turn, Rich sent everyone but his Drakeling into the red zone. Johan was at 12, and there were 10 power of creatures coming his way, in the form of two Wurms (5/5 and 3/3), a Citanul Woodreaders, and Dream Stalker. Sadeghpour carefully considered his blocks. He had just a 2/4 Spider token and a Thallid Shell-Dweller, and blocked such that he didn't lose anyone but did get taken to 6. Rich played a morph and passed.

Johan thought for a little while about what to do.

"If you don't have something you're dead," declared Rich.

"You have the Strength in Numbers?"

Johan just scooped them up

"I almost lost that game to some bad sideboarding… took out Piracy Charm for Molder," said Rich.

Neither player's starting hand was too awkward though, with Johan starting out Magus of the Scroll and Thick-Skinned Goblin, while Rich was forced into a defensive Wurmcalling for a 1/1.

Johan continued to curve out with a Nantuko Shaman, which Rich matched with a Spiketail Hatchling who traded with the green monster.

When Hoaen played a Herd Gnarr, Johan declared that it was 'time to mise' and activated his Magus with 4 cards in hand. He named Penumbra Spider but revealed StingScourger. A swing and a miss. The little goblin Man-O-War did remove Hoaen's token, but then died to echo, as Johan forgot about Thick-Skinned Goblin.

Rich unmorphed Vesuvan Shapeshifter as Magus of the Scroll and tried to kill the original with his copy, naming Island but revealing Tolarian Sentinel. His Herd Gnarr beat Johan down to 16, and Rich passed. 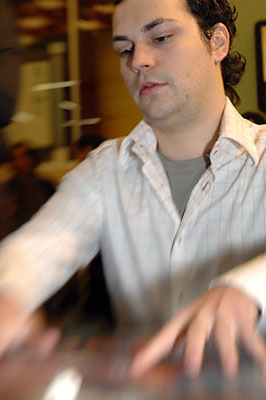 Sadeghpour plays the board.

Johan bashed with his team to take Rich to 14, then played Cockatrice. Rich, meanwhile, made that Tolarian Sentinel and used his Shapeshifter again as a Magus to kill the opposing Magus. Time was running tight and play was fast when Johan dropped his bomb - Pyrohemia.

This looked good for a race situation, but Rich did have Citanul Woodreaders to fill up his hand, and with 9 lands in play, it seemed likely that he'd have a lot of answers. Penumbra Spider from Sadeghpour was the ideal creature to have around for Pyrohemia, with a large back end and a replacement built in should Rich get rid of the original.

Hoaen drew and suspended Ancestral Vision, with a hopeful whistle. It seemed quite unlikely that the game would still be going on by the time it lost all its time counters. Johan played Utopia Vow on Johan's one blocker, and swung. Hoaen was out of cards and had very little time to draw an answer. His next draw step did not find him one, and just as time was running out on the match, Hoaen extended his hand.