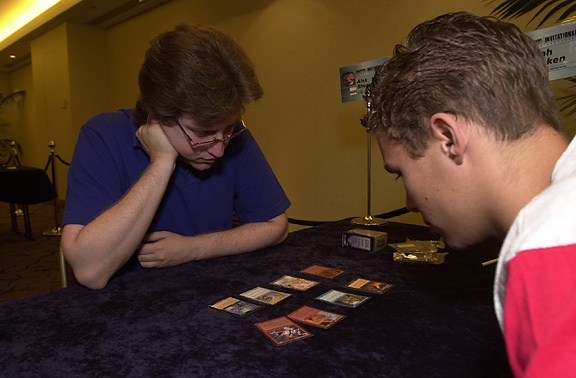 Alex Shvartsman faced a real test in round 8 when he ran into Noah Boeken. Boeken has been on quite a roll lately, posting high finishes at Worlds and Grand Prix Manchester along with winning both the European Championship and Grand Prix Helsinki. Boeken is currently tied for third with a 5-2 record while Shvartsman is alone in first at 7-0.

Shvartsman has an interesting approach to Solomon draft. Whereas most people spend most of the allotted 60 seconds rearranging the cards lining up possible split arrangement, Shvartsman doesn't touch the cards until he gets a 5-second warning. Then in one quick flurry of movement he divides the cards into two piles. His idea is that this will deprive the opponent of some of their thinking time and hopefully throw them off their game.

Boeken won the coin flip and forced Shvartsman to split first. Shvartsman picked up a Harrow along with four other cards in pack 2 while Boeken got Ray of Command and Mageta. However, in the next pack Boeken picked up Fertile Ground along with 4 other cards and the players fought over green the whole time.

Over the course of the first half dozen packs, the Legend theme became more and more apparent. In pack 6, Boeken - who had basically all the blue cards so far - put Empress Galina on the 5 side of a 5-3 split. Shvartsman read it, giggled, shook his head and drafted that pile. The Empress, which can take permanent control of any Legend, made Shvartsman want to play blue despite her double-blue mana cost. Shvartsman, who had been b/r/g up to that point, could have "played nice" and taken Latulla plus Soul Burn, but he didn't want to. Alex really seemed to enjoy the legend theme and announced "this is great!" when he saw Sword of the Chosen and realized it was actually a decent card in this environment. 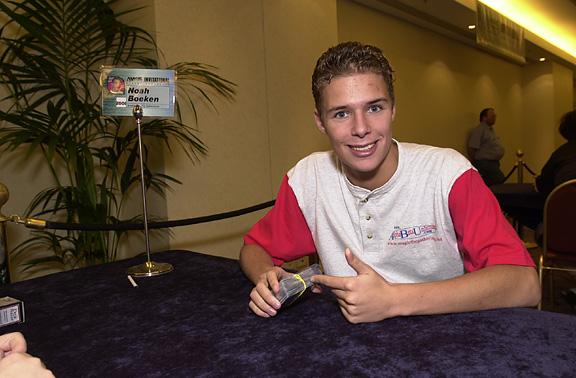 Boeken separated Tsabo Tavoc and Captain Sisay when they both came up in pack #8, effectively asked Shvartsman whether he wanted to kill legends or search for them. Shvartsman chose to try to kill them with Tavoc, probably because he wasn't planning to play white. However, in pack #10 when Boeken lined up a bunch of good white cards on one side (Orim, Reprisal, and Dismantling Blow), Shvartsman took them saying later that he thought "Noah got a little greedy there." After getting Radiant, Archangel in the final pack, Shvartsman's white was almost deep enough to play, but he knew he needed to trim down to 3-colors if he wanted to avoid mana screw.

At the end of the draft neither player seemed confident. Both thought in had been a close, interesting draft. Boeken debated for a long time about whether to play blue or red along with his green and white. Eventually he decided to play the blue (which includes Ray of Command and Barrin) and to put one Mountain plus Breath of Darigaaz into his deck. Shvartsman wound up playing blue, black, and red. There are number of good white and green cards in his sideboard, but he felt there were three real bombs in the format (Tsabo Tavoc, Captain Sisay, and Empress Galina) and he had the opportunity to play with two of them, so he did.

Shvartsman also had Sword of the Chosen in his main deck.