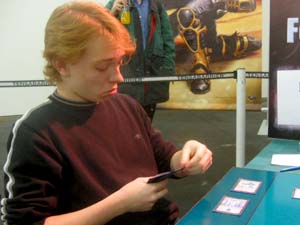 not sure I would like to be in Pierre's shoes right now. Sure, being a win and a draw away from day two of the largest European Grand Prix ever must be nice. But he can't be happy about his match. Playing against the World Champion, in his own backyard. With the crowd behind the young German. Still, you don't get to 6-1 without a decent deck and some skills, especially if you don't have three byes.

They both had to mulligan but seemed quite happy with their second hand. Zink came out with Bonesplitter, Neurok Spy and Skyhunter Patrol. Pierre started with a much slower Iron Myr and Fireshrieker.

As soon as the Patrol grabbed the equipment Baussaron had Shatter for it. He played Slith Firewalker and gave it the Fireshrieker. That would have been an interesting "combo" if Zink hadn't used his Electrostatic Bolt. That was a very timely play.

They carried on ignoring anything even remotely related to blocking, but Baussaron's equipped Myr was no match for Zink's two creatures. He needed some extra help. He used Shrapnel Blast to ice the Patrol after Zink played a second Bonesplitter.

But it was too little, too late. One turn later Zink had him.

They sideboarded to the constant, and very unique, sound of Antonino De Rosa. You don't even have to look at their game to know exactly what is going on.

Baussaron dropped Myr and gave it Bonesplitter to start things. Meanwhile Daniel Zink was busy playing mana sources, followed by Soldier Replica. The Frenchman got tricky with a Detonate on Zink's artifact land ater playing Fireshrieker. The German cycled Pyrite Spellbomb but found no land to play. He was now stuck at two mana.

The amazing Gold Myr (now carrying Bonesplitter and Fireshrieker) waltzed into the Red Zone. Again Zink found no land, and this time he was forced to discard. Still, Baussaron seemed unable to drop the elbow. He played another Myr, deciding to tap the huge one to cast Lightning Greaves as well.

Zink found his third land but Baussaron showed why he decided to play Myr and Greaves on the previous turn: Rustmouth Ogre. The Replica took one for the team and a Bolt took out one of the Myrs. But the untouchable Ogre - who now had the Greaves - was too much for the mana-screwed World Champion to handle.

Pierre played Somber Hoverguard and gave it the axe. On the next turn he hesitated between giving it the Fireshrieker or playing something else. Zink did his best to appear innocent. Finally he decided to Detonate the Talisman (cutting Zink's Black mana) but it didn't matter. The "Champ" had Electrostatic Bolt.

All the removal in the world won't help you if your whole army is Soldier Replica. Baussaron found Arrest and a Myr to carry the equipments. Zink answered with Vulshok Battlegear and Ogre Leadfoot. Unfazed the Frenchman dropped the Monkey-copycat, Viridian Shaman to ice the Battlegear. 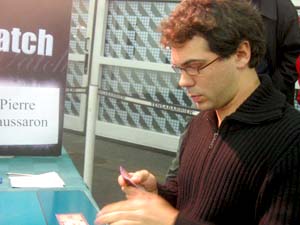 The Shaman grabbed the equipment and brought the German crashing down to eight. Afterwards Baussaron played a blocker: Rustmouth Ogre. Daniel slumped in his chair and shook his head. He played Bonesplitter and used Blinding Beam to screw up Pierre's math.
The Frenchman played another Myr to chump. That convinced Zink to sit back and played Megatog, but as a blocker. Baussaron loaded up his gear on the Rustmouth Ogre and sent it in. Megatog jumped in the way and ate up Zink's two artifacts. The monsters traded and Baussaron played Tel-Jilad Archers.

Ogre Leadfoot gained some Lightning Greaves. This time Pierre Baussaron spread the wealth before sending his whole crew in. The Ogre traded with Viridian Shaman and Zink fell to four. He played Neurok Spy and revealed his hand of two Sykhunter Patrols with only one White mana.