Round 8- Kai Budde vs. Ben Rubin 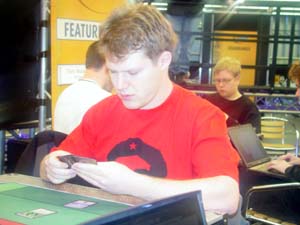 Buehler strolled over as both players were shuffling, and pointed out that Ben was the only American in the feature match area this round.

Buehler- "Three Scandinavians, Three Mainland Europe, one American."
Rubin- "How many Americans are still alive?"
Buehler- "Not many."
Rubin- "I remember when it wasn't this way."

It seems that the downfall of American Magic has become a topic of choice lately, as even the perception of Americans being draft specialists has lost a great deal of its luster. The two-time Masters champion Rubin seems to be holding strong, however, with a 5-2 record heading into today. Even though it was sarcastically suggested that Rubin was the last hope for the Americans in this tournament, it's worth noting that he peeled off his sweater to reveal a different Che Guevara shirt from the one he wore yesterday. A little older and more mature, Rubin seems to have traded in his trademark Superman shirt that read "Truth, Justice and the American Way" in order to express a more progressive ideology.

His opponent, Kai Budde, misplaced a card and had to consult his decklist to find out what it was.

Budde- "I am so stupid, it's unbelievable"

Kai is playing a white-black deck highlighted by Solar Tide, Mask of Memory and Leonin Sun Standard, while Rubin is playing a deck with four colors, plenty of Spellbombs and affinity cards like Myr Enforcer, Override, Thoughtcast and Irridate.

Rubin played an off-color Spellbomb and a Talisman, while Budde had Cathodion. It attacked for three, and a Skyhunter Patrol died right away to Rubin's Terror. Myr Enforcer followed, but Budde answered it with Arrest, and attacked for three more damage. The parity war continued, as Rubin's Mirror Golem was removed with Altar's Light, and Rubin killed the Cathodion with Irridate. Budde came back with Leaden Myr and Nim Replica, which died to Rubin's Irridate. Leoin Den-Guard gave Budde the biggest threat at the table at 1/3, and left him with only one card in hand while Rubin had one as well, cycling through Spellbombs to find a threat or an answer. Budde soon busted the game wide open, playing Skyhunter Patrol and Leonin Sun Standard. Shrapnel Blast dealt with the Patrol, but Rubin was clearly not happy with the Sun Standard, which was enough to take the game.

Budde's Leonin Elder was matched by a pair of Spellbombs, and Budde had Mask of Memory to start gaining some massive card advantage right away. Neurok Familiar provided a blocker and got another Spellbomb, so Budde summoned Cathodion and put the Mask on it. Rubin played Thoughtcast, and didn't seem optimistic about his options. He cycled through a Spellbomb, and played two more. Neurok Familiar chump blocked the Cathodion so Budde couldn't draw more cards, but he did play Frogmite and a Den-Guard. On the next turn, Rubin simply played another Thoughtcast, and as Budde went to move the Mask to the Den-Guard, he realized that Rubin had green mana open, and could make a 3/3 blocker with Lifespark Spellbomb. Instead, he cast Irridate to kill the Den-Guard, and took six damage. Rubin had a blocker in Wizard Replica, and made a 3/3 creature with a Spellbomb in Budde's next attack. Before blockers, Blinding Beam tapped them down, letting five damage and a Mask activation get through. On the next attack, the other Spellbomb made a 3/3 to block and kill the Frogmite, and Irridate handled the Masked Cathodion. Budde played a Skyhunter Patrol, and gave it the Mask. Rubin went digging for resources with Thoughtcast and played a mountain, giving him four colors of mana. Budde played a pair of Nim Replicas, and Rubin sacrificed a Spellbomb in response.

Budde, shaking his head- "He's spent the whole game with seven cards in his hand." 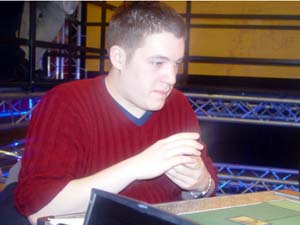 With the Replica still on the stack, Rubin countered it with Override. He then untapped and played Myr Enforcer, and Budde played a second Patrol. Things seemed stabilized thanks to Rubin's Mirror Golem, but Budde cast Blinding Beam, and pushed through with his team. Due to Shrapnel Blast killing the Masked Patrol, this wasn't as bad as it could have been. Terror killed the other Patrol a turn later, and Rubin played Copper Myr, which died to Irridate. This cleared the path for Leonin Elder, which donned the Mask and got through for damage. Rubin's Enforcer cracked back for four damage to bring Budde to 31 (Thank you, Leonin Elder), and in response to Raise the Alarm, Rubin cast Betrayal of Flesh with entwine, killing the Elder. With Raise the Alarm still waiting to resolve, Rubin got back Wizard Replica and countered it. Budde now cast Solar Tide to kill Rubin's two big creatures, but he came right back with another Enforcer. Budde played a Sun Standard, which made Leaden Myr impressive- it had to be, since Budde had no cards left in his hand. Thanks to the Standard, it was a 5/5 in combat, and traded with the Enforcer. Rubin played Barter in Blood to kill it, but Budde peeled another Myr off the top. Rubin played his own Myr and sighed, as it chump blocked Budde's. Hematite Golem chump blocked as well, and Rubin conceded when he ran out of things to throw in the way.