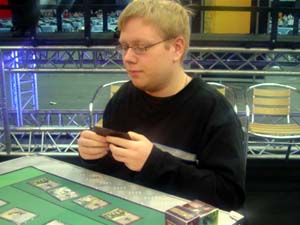 was a classic matchup. One half of the Fabulous Ruel Brothers, versus gangster extraordinaire Tomi Walamies. Or at least, it would have been, with maximum witty banter, were it not for the early hour. When asked for their record, they had the following to say.

"And we probably have the two best decks." - Antoine Ruel

"I'd like to send greetings to all the people who live on the same block as I do. After all, I'm supposed to have a sense of territory." - Tomi Walamies

Walamies opened with one of his many Slith Bloodletters. Ruel was forced to let it get past his Silver Myr. Walamies played an Iron Myr and ended his turn. Fortunately for Ruel, he had a Cobalt Golem to keep the Bloodletter at bay. Walamies tapped five and dropped Pewter Golem.

Ruel calmly showed him Crystal Shard, and before he could activate it Walamies was already picking up his Golem. He untapped and replaced it with Goblin Replica. Ruel added Neurok Spy and Copper Myr to the table, tapping out. Walamies swung in with Bloodletter and Replica. He regenerated the blocked Slith and then blew up the Crystal Shard. Ruel bashed him and then added another Cobalt Golem and Neurok Spy. He was in a position to do considerable damage.

Walamies had an ace up his sleeve, though: Loxodon Warhammer. The Moriok Scavenger that got back his Goblin Replica seemed like an afterthought. Ruel hit for eight unblockable and left three Myr on defense. Walamies suited up his Slith with the Hammer and bashed through unobstructed. Then he tapped out for Ogre Leadfoot.

Ruel hit again, but the hammer was making things close. Walamies was at five. He hit back with Leadfoot and Slith, and after considering, Ruel let it through. Walamies turned over a Consume Spirit to steal the game.

"That's why I drafted the Loxodon." - Tomi Walamies

"That's the problem", said Ruel, pointing at his nameplate, "Nobody trusts the French, I don't know why."

Walamies's second turn this game was a much less devastating Iron Myr. Ruel showed him Troll Ascetic on the third turn. All Walamies could do was accept his pain and make another Myr. When Ruel made no fourth turn play Walamies mused aloud about the possibility of Needlebug. He shrugged and made a Pewter Golem.

Ruel made no bug, but did have Tel-Jilad Archers for his fifth turn. Walamies replied with Woebearer and Slith Bloodletter. The Ascetic continued to break through, and Ruel made a second Archers. Walamies's Woebearer was the only thing breaking through. Luckily, he had the Warhammer to really jazz things up. That hope faded when Ruel dropped Creeping Mold. Woebearer continued to hit for two.

Walamies built up more men, including Clockwork Condor and Vulshok Berserker, but couldn't get through for more than two a turn. When Cobalt Golem hit play, he was stuck in his tracks. Crystal Shard made things harder. When the Golem took to the air and attacked, Walamies considered his options and decided to chump with the Condor. Naturally Crystal Shard rescued the Golem, but after it was replayed, Walamies entwined Grab the Reins to get rid of it and Stalking Stones. Unfortunately, Ruel had Predator's Strike.

Then he untapped and got all Dozen Eyes.

Soon Ruel was crashing into the Red Zone with almost all of his creatures. Walamies tried to block to kill the 5/5 Token, but Ruel had another Predator's Strike. When the dust cleared, Walamies was at one.

"I wish I had attacked with more tokens." - Antoine Ruel

It hardly mattered. Walamies scooped up his cards.

Walamies mulliganed a hand he called "a really tough decision". Though he managed a turn-three Krark-Clan Grunt, Ruel had already busted out with Steel Wall, Silver Myr and then Troll Ascetic. Walamies put down the big hammer and passed it back. Ruel's Thirst for Knowledge ditched a Clockwork Condor and got him the lands he needed. 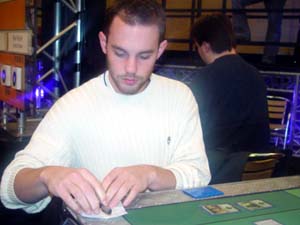 Walamies made an Iron Myr and passed it back. Ruel settled in for the long game with Serum Tank. Walamies decided to press, equipping his Grunt and making a sacrificial Myr. He swung in. As expected, Ruel blocked with his Ascetic. However, when Walamies sacrificed his Myr, Ruel gave him a lesson in tempo with Regress on the Grunt.

Ruel continued to draw cards and make monsters, now a Cobalt Golem and then Tel-Jilad Archers, while Walamies rebuilt with Pewter Golem. He equipped it and started pushing damage over the Archers, gaining a little life in the process. It only worked once, and then Turn to Dust stopped his fun. Soon a gang of Neurok Spies were dancing on his head.