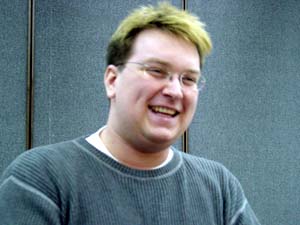 of these players are known for their Invitational cards. Jens Thoren is the secret identity of the Solemn Simulacrum and last year's Invitational winner. Jens' passion for the game has been on the decline over the past year and has hinted at retirement. He did seem reinvigorated after a week of drafting at local Hong Kong shops and claimed that if they had similar stores in Sweden his perspective on the game would likely be different.

Olivier is known for his peculiar card entries in the Invitational which revolve around penguins. Olivier is chasing after the points he lost in his miserable finish in Kobe. From here he is heading back to Japan for Grand Prix Sendai in two weeks. The year end payout for the Player of the Year race is on many players minds and Olivier is counting on few Western players attending the Japanese Grand Prix. Olivier had a Pro Tour Top 8 earlier this year in Amsterdam, which makes up the bulk of his points.

Both players were 6-1 and were locked into Day Two. The battle was now one of position. With so many of the good players concentrating into tomorrow's competition each player wanted to eke out as many victories today as possible.

Jens quickly plopped his hand back on top of his library in hope of getting six better cards. Olivier nodded as if this had all happened before, "Some days all of your opponent's mulligan. I had two got to five."

Nothing much happened until an Iron Myr from Olivier and a Darksteel Ingot from Jens. Olivier accelerated into a turn three Nim Shambler. Jens played a Leaden Myr and Echoing Ruined the Iron Myr. Oliver threatened to attack with the Shambler but if he was trying to read whether or not Jens was going to block he was out of luck. Finally he sent in the Shambler and Jens blocked.

Olivier played Moriok Scavenger and the returned Iron Myr. Jens fumbled for tokens for his Bruiser but Olivier saved him the time and Shattered it. He attacked on his next turn for three. Jens had no play. Olivier looked to be out of gas too and cycled a Sphere for a card. He played a Wall of Blood. Jens' Oxidda Golem had to stay back and when Oliver attacked into it with the Scavenger, the Frenchman cringed at the Battlegrowth.

Olivier put out a Pewter Golem. Jens mustered a Viridian Longbow and shot down a Myr but Olivier kept the pressure up with Krark-Clan Grunt. When Olivier attacked on the next turn, Jens put his Golem in the way of the Grunt but Olivier flashed out a Needlebug and gave his Grunt first strike. That was enough for the Solemn one and he scooped.

Olivier was pleasantly surprised when he asked Jens, "You will play?"

Jens had to mulligan again and laughed as he drew up his next six. He decided to keep. He had an Iron Myr while Olivier played a Krark-Clan Stoker. The Frenchman put his 2/2 in the way when Jens equipped his Myr with Specter's Shroud. Jens aimed a Viridian Shaman at a Great Furnace and Olivier flashed out Needlebug in response. He played a Goblin Replica on his own turn and put it in the way of the equipped Shaman.

Olivier recovered his Replica with a Moriok Scavenger. He followed up with a Pewter Golem on the next turn. Jens had only a Leaden Myr with Specter's Shroud and Viridian Longbow when Olivier attacked with his team. Jens made a Tangle Spider and jumped the Needlebug. Olivier had the Chittering Rats on the next turn. 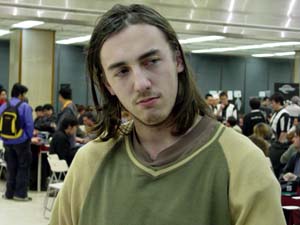 Jens threatened to climb out of the hole he was in with his Longbow but Olivier dropped him to one with a Warhammer on the Scavenger. Jens fortified for a last stand with an Oxidda Golem but Olivier had the seventh land to play and activate the Goblin Replica he had been holding.

Jens showed off the pair of Darksteel Gargoyles he had been holding. "I had both of these in my hand each game with six lands in play."

1 Hematite Golem 1 Wand of the Elements