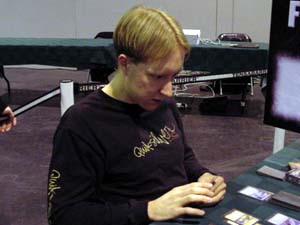 last round of day two and the top table sees experienced pro Mattias Jorstedt playing local hero Jonny Chapman for the honour of going into day two undefeated. Mattias Jorstedt from Sweden has a Pro Tour title (Osaka) under his belt. Jonny Chapman might be the clown of British Magic, but shouldn't be too lightly dismissed as he has made day two at the British Grand Prix for the last three years.

Owing to a few technical problems I arrived at this game just after the beginning of the first game. Chapman had to mulligan but it was plain to see why both decks were 7-0 as both played a Skullclamp on turn 1.

Unfortunately Chapman forgot to play anything else to go with his 'clamp while Jorstedt busted out Silver Myr, Frogmite, Vulshok Morningstar and Specter's Shroud.
The full equipped Frogmite bashed Chapman while he found a Haematite Golem.

Jorstedt was meanwhile doing very mean things as a Nuisance Engine appeared. Chapman had an Eching Ruin to stop that trick before it got going, but he was clearly behind. The gap opened wider as the Golem vanished to Altar's Light

Another hit from the tooled up Frogmite dropped Chapman to 8. He drew a rather unimpressive Glaivemaster and scooped in the face of an impossible board position.

Chapman opened with a Transfixer and Myr and then ramped up to a Razor Golem that Jorstedt copied with Sculpting Steel. Jorstedt then found a useful Spectre's Shroud to stick on a Pteron Ghost to start to strip Chapman's hand away. 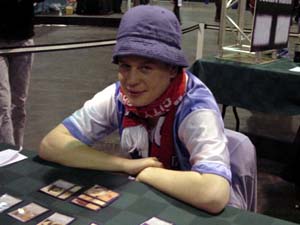 Again Jorstedt found the Skullclamp and again Chapman's board position was outclassed. The ground was snarled up with a Razor Golem on either side and Jorstedt was the only one with fliers as a Drillskimer joined his team.

Chapman hung on for a couple of turns before deciding enough was enough.