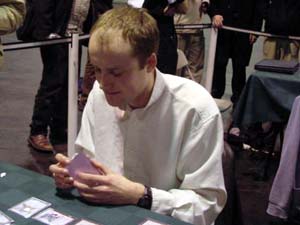 both players on 5-1-1 and both needing a win to advance to day two, this promised to be an adrenaline-pumping, jaw-dropping action-fest between these two British superstars. Craig Stevenson of team Leeds is a frequent Pro-Tour attendee, and top-eighted Odyssey Block Constructed GP London last year. Simon Marshall-Unit is a rising English contender with a good record in a several previous events, and is looking to punch through to day two and make a name for himself at a major international event.

Both players shuffled, presented, and shook hands in a gentlemanly manner. Craig, having won the toss, elected to keep his hand. Simon was less than satisfied, and sent his hand back into the deck. Simon kept on six, and the game was afoot!

Craig led with a Mountain, as did Simon, who whipped out a Bonesplitter. Craig made himself a Silver Myr, and Simon a Leaden one. Craig shot Simon's Myr and swung for 1, but had no more land. Simon had a third land, but no men, and made a Vulshok Morningstar.

Craig, not to be outdone, made a Vulshok Battlegear and passed it back, still shy a third land.

Simon's next turn brought forth an Arcbound Crusher, and Craig finally found his third land. After some deliberation he equipped the Battlegear to the Myr and passed the turn.

Simon played a Great Furnace, adding a counter to his Crusher, and then Dominated Craig's Myr!! The Morningstar made it's way onto the Crusher which sauntered in for four, and it was Craig's turn.

Again Craig missed a land-drop, and frankly was looking about as good as Marco Blume in fishnets. He whipped out an Elf Replica and ended his turn.

Simon's Crusher grew in both power and toughness, acquired a Bonesplitter, and Craig took a savage 11 down to 5. Simon made a Neurok Transmuter, and passed again.

Craig made himself a Swamp - incapable of providing the green mana that would have taken care of the troublesome Domineer. After surveying his options, he realised he had none, and scooped up the cards.

The action was disrupted briefly as Daniel Nuttall, half cut in an Iron Maiden football shirt, stumbled into the play area chanting "Up the Irons", and was eventually dragged off by security, protesting something incomprehensible about Burnley and Blackburn.

Simon returned Craig's Domineered creature back to him as they shuffled, and joked that he should have hung onto it to get them both a game loss and take the match right away! Fortunately his camp pinky-purple sleeves contrasted strongly with Craig's manly black ones, so there was little danger of anything untoward taking place.

The players shuffled and presented, and both kept their hands. Simon had the first play of the game with an Arcbound Worker, while Craig made a slightly more impressive Vedalken Engineer. Simon made a Bonesplitter for his Worker and swung for 3.

Craig untapped and laid a Mountain to go with his Island and Swamp, online in three colours! The Engineer failed to impress anyone with its mana-producing abilities, as Craig swung for 1. However, his Unforge ripped Simon's Bonesplitter and Worker asunder, and the turn went back to Simon.

Simon made a Nim Replica and passed. Craig made himself an Elf Replica, and Domineer stole an Elf Replica, not as good this time, but impressive all the same! In Simon's end-step Craig played Thirst of Knowledge and discarded paired mountains. Craig added a Goblin Replica to his side which glistened in it's foily splendour. He passed, leaving an Island, Swamp and Engineer untapped, enough to activate the Goblin should the need arise.

Simon swung right in with both men, which fell to the mighty of the Replica. Simon made a Cobalt Golem, and passed. Craig made himself a Spikeshot Goblin and a Leonin Bola, equipped the engineer and passed, tapping Simon's Cobolt golem in his upkeep.

Simon drew a Vault of Whispers, played Skeleton Shard, returned Arcbound Worker to his hand and replayed it. With that he was done.

Craig untapped and had a good long think. Bola to the Engineer, and a feeble 1/1 Nim Shrieker slipped into the board. Embarrassed at it's small front-end, it hid at the back of Craig's troops.

Simon's Cobalt Golem was again tapped by the Bola. He did nothing and passed, Carry Away in hand.

Craig swung for 1, re-equipped the bola, and passed. Once more, the Golem was held at bay, and Simon's Nim replica, brought back thanks to the power of the Skeleton Shard, came into play. Simon used it to eat the Engineer and passed again.

Craig's Shrieker came in for a cheeky one, and the Bola now made its way to the goblin, and to keep kept Simon's Cobolt Golem in check. Simon whipped out a Lodestone Myr, spelling trouble for Craig, and he was done.

Craig made himself an Emissary of Despair. Simon, quite fed up by now of having his stuff tapped, played Carried Away Craiig Bola. A man de-bola'd is not much of a man at all, and Craig looked on glumly his best chance at winning the game was Carried Away. Simon returned the Arcbound Worker, replayed it, and passed the turn.

Things were looking grim indeed for Craig as he untapped, laid a Swamp, and declared his attack. Cobalt Golem tapped his Emissary of Despair, and Craig had nothing else to do.

Simon meanwhile was still firmly on cours, as his Lodestone Myr sailed in uncontested. Simon tapped a Great Furnace and Arcbound Worker to deal Craig a total of 4, dropping him to 10. Craig shot Simon to 16 with the Goblin, and untapped.

Murderous Spoils targeted the Cobalt Golem, but Simon used the Bola's ability to unattach, keeping it safely on his side. Simon recoursed his Nim Replica, and swung with the Lodestone Myr. Craig, feeling defeated, blocked with his Nim Shrieker, and Simon made four pumps for five points of trample damage to Craig.

Craig shot Simon and untapped, in deeper... trouble than a potholer who'd tunnelled into an old cesspit. Barbed Lightning was nonetheless a fantastic draw for Craig, as it took down Simon's Lodestone Myr, shot Simon for 3, and Craig nipped in for one with the goblin.

Sadly Simon had not forgotten how to operate his Skeleton shard and used it to retrieve the Lodestone Myr from the bin. Simon replayed it. Craig used a Looming Hoverguard to return the Lodestone Myr to the top of Simon's library this time, making the situation look a little less hopeless for our Northern Hero. 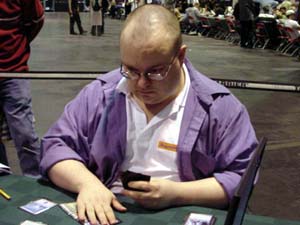 Simon attempted to put Leonin Bola onto the Arcbound Worker, but Craig had an Echoing decay as a response!!! The cheeky scouseboy was all out of tricks, but it's never wise to discount the top of this man's deck! He untapped, drew, swung in with a looming hoverguard reducing Simon to 7, and declared "Searing Flesh!"

"Wrong set." smiled Simon, although a Fireball could have worked just as well.

Nevertheless, Craig had no such trickery. Simon's next attack took the game and the match.