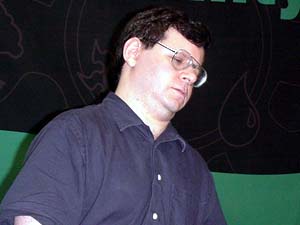 Sonne has been having a quiet and consistent year. He laughed and described his season of middle of the pack money finishes, "As non-descript as a good professional Magic season can get." The CMU-TOGIT player was sitting at 6-1 and was looking to finish strong to ensure his place near the top of tomorrow's standings.

His opponent was Mike Pustilnik--also 6-1. Mike has also had a consistent season although it not the type of consistency you want to brag about. He recently fell off the Pro Tour and while most Pros with his impressive resume would be playing this weekend for the money Mike was more concerned with the invitation. Mike only had two byes coming into this tournament which worsens his tiebreakers. A second loss was potentially fatal for his chances at a seat around a draft table.

Mike got things started with an Arcbound Stinger. Arcbound Slith saw play for Jon. Mike killed it with Echoing Decay and swung in for one. Slith Ascendant was waiting in the wings but Jon decided to play Swamp over Plains and cast Dross Golem for three mana.

Hematite Golem barred the Dross's entry into the red zone and Jon put out a Razor Golem for four mana. Mike buzzed over for a couple of points with his Stinger and summoned a Goblin Replica. Mike had only green and black mana though and could not activate its--or the Hematite Golem's ability.

Jon drew a Bonesplitter and sent his Dross Golem wielding it into battle. Mike put two creatures in the way and Jon chose to kill the Hematite. The Ascendant came into play and Mike had to leave his Stinger back. Jon equipped his Razor Golem and got in for five unmolested and added a Skyhunter Patrol to his air force.

Mike had a Tel-Jilad Archers but was understandably reluctant to put it in the way of a Bonesplittered Patrol. Jon fortified with his second Razor Golem. Mike had no plays and passed the turn. Jon was hesitant to attack with all of Mike's mana open and put out a Loxodon Mystic and said, "go."

Arcbound Crusher made an appearance--a little late for Mike's liking judging by the sour look on his face and his overwhelming board disadvantage. Jon turned everyone but the Mystic sideways. He rotated the Mystic and well to tap the Archers. Mike blocked a Razor Golem with Goblin Replica and killed it with Predator's Strike. The Slith was eaten by the Stinger. Jon's Moriok Scavenger brought back a reasonably priced Dross Golem.

Crusher picked up its fourth counter when Mike played his elusive red source--Great Furnace. Mike cast Betrayal of the Flesh during is own turn to take out the Skyhunter Patrol and return Hematite Golem into play--fifth counter on the Crusher.

Jon put out Leaden Myr. Jon moved the Bonesplitter onto his Scavenger and sent everyone but the Mystic into combat tapping the Archers before blocking. Mike fell to three after blocking the Scavenger with Replica and destroying the Razor Golem. Jon summoned a back-breaking Flayed Nim. There was nothing Mike could do but preserve precious time and scoop and that is exactly what he decided to do.

Mike had a Yotian Soldier in play on turn three when Jon summoned a Slith Ascendant. Mike's Arcbound Stinger looked like it could hold off the flier but as most people have always suspected, Jon had Screams from Within. He killed the Stinger and negated its benefit to the Yoti with the enchantment . Mike popped his Chromatic Sphere for green and appeared frustrated when he did not draw a fifth land. Instead he manaburned for one and attacked for one with his soldier. Jon grew his Slith and played a Loxodon Mystic. Mike passed the turn wit mounting frustration and Jon had a Bonesplitter for his Slith. Mike found land number five. He had to Detonate the Bonesplitter but there was no answer in sight for both the Slith Ascendant and the Mystic that had its back.

Mike was optimistic that he would still be able to make Day Two and thought there was even a possibility of drawing in.