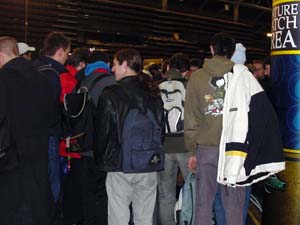 Olivier Ruel is somewhere in there, honest

players are good friends of each other and so we should be in for a fun match here.
We decided to cover Olivier again because both him and Quention are such clowns so we couldn't let this one pass.

Olivier starts with again a questionable opening hand as it didn't feature any forests. Still he decides it's worth the shot. Quentin doesn't have the best start either but at least he has all his colours and is able to get some creatures on the board.

When Olivier finally finds his forest he seems to be in bad shape as he is so far behind in developing his board.

He is able to keep Quentin's Conclave Equenaut at bay with a Faith's Fetters but a Cloaked up Mossdog spells big trouble for Olivier.

It wouldn't be Olivier Ruel though if he would come up with something magic: a turn after a Golgari Rotwurm enters play Olivier comes up with a Pollenbright Wings making 5 tokens… 4 Olivier Ruel's and a Pierre Canali to chump block with which he is very sorry about.

And all of a sudden Quentin has no outs against this token machine. I must note though that Quentin had a Devouring Light in hand for the Rotwurm but wasn't able to cast it since Olivier had Brainspoiled a guy the turn before. Sometimes everything turns out right in the end.

During sideboarding we played hangman with dutch words but I must be honest by saying both players really sucked. 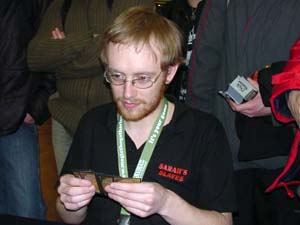 This is Quentin Martin's 'Olivier owns me' face

Quentin makes Olivier go first and Olivier has to mulligan his first 7. It doesn't seem to hurt Oli at all as he comes out very strong with a Roofstalker Wright and a Shambling Shell.
Meanwhile Quentin only has a Golgari Signet in his first 3 turns.

His forth turn Greater Mossdog immediately receives a Clinging Darkness from Olivier. To somewhat put up a fight Quentin reboosts his guy with a Moldervine Cloak but not to much affect.

When I looked up from my computer both players were throwing cards from their sideboards in play meaning Olivier took the match 2-0 and Quentin has to win his last match in order to make day 2.