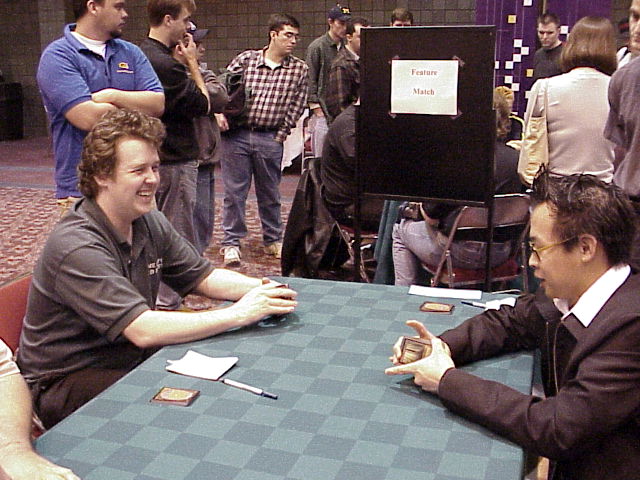 Round 8 saw two of the nicest players to frequent the Pro Tour squaring off in the Featured Match arena. Lan Ho, called the "Sexiest Man" on the Pro Tour, and "Lanimal" by his legions of female admirers is playing a blue/white deck that splashes green for Llanowar Knight as well as a few tricks. Alan Comer, the "Mad Genius of Magic" (inheriting the title from Erik Lauer), is playing an extremely powerful deck, featuring double Fires of Yavimaya, and 3 Legendary creatures - Rith, Molimo, and Verdeloth! Alan says as the players were shuffling that the deck fit his style, but he wasn't sure that the tempo was right. Lan responded that this didn't speak well for Alan's style. Both players chuckled, and the match was set to the right attitude out of the blocks. If Magic needs good ambassadors of players that are good as well as exemplary people, these two sure fit the bill. 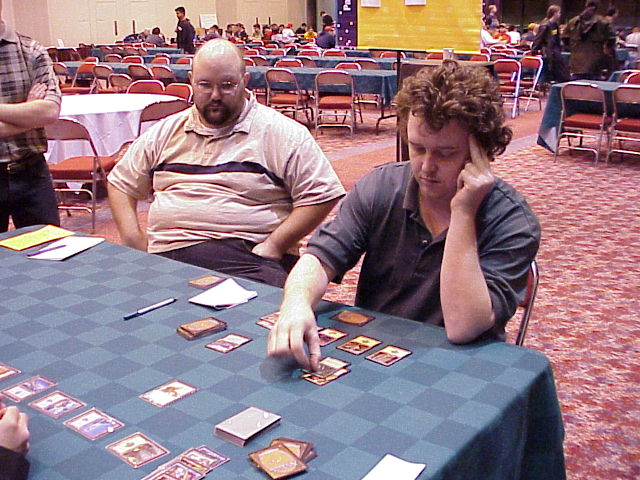 This game was over fairly quickly. Alan's opening hand was amazing, with 4 solid, quick creatures, a Fires of Yavimaya, and a Plains and a Forest. Lan opened with land and Opts for his first three turns. Alan laid a second turn Quirion Sentinel and a Thunderscape Apprentice. Lan finally laid a creature on his turn 4, a Razorfoot Griffin that totally shut down Alan's offense. Alan missed his third, fourth, and fifth turn land drops. His dream hand was turning into a nightmare, as he had to discard, tossing away a Pouncing Kavu he would never be able to cast. Lan Fact or Fiction twice over the next few turns, played another Griffin, and Washed out Alan's attempts at getting any creatures on the board. Alan eventually drew into some land and a Harrow, and cast Verdeloth, but Lan was ready with the Exclude.

This game took a total of five minutes, if that. Lan played nothing but islands and a 5th turn Rampant Elephant. Alan mulliganed into a 4 land, Molimo and Fires hand. He drew some more creatures though, and after laying the Fires, he used his hasted creatures to just beat the tar out of Lan. Molimo came in for the kill not soon afterwards. 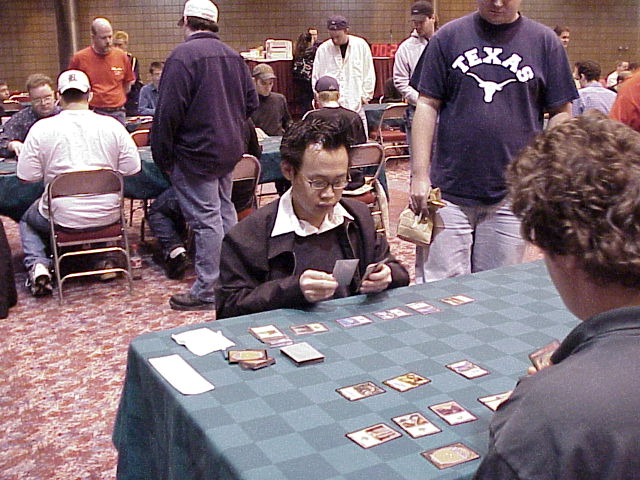 This game was quick as well, and it seemed that the majority of the actual time in this match was watching Lan shuffle and joke around. Alan repeated his problems from game one, and just didn't draw any land throughout the game. He got Washed Out again, and Lan just overran him with Griffins. Alan would have been in this game had he drawn a third land any time before turn 6, when he drew a Tinder Farm, which didn't help his cause.