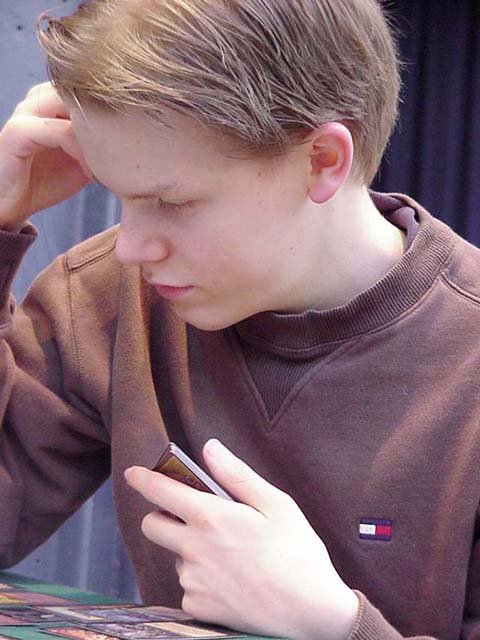 When the judge asked if everyone had an opponent, prior to the round starting, Dominik told Alex, "You don't", obviously referring to the quality of his deck. "Is your deck really that bad?" asked a surprised Shvartsman.

Alex was going first and kept a hand with two Plains, but Dominik was forced to mulligan. Despite this it didn't take long for the American to get going, as he drew the Forest straight away, and played turn two Llanowar Knight, enchanting it on the third turn with an Armadillo Cloak.

Dominik's dislike of his deck was perhaps justified, as he played Thunderscape Familiar and gave it a Scavenged Weaponry. "Well we both have creatures with enchantments on them," joked Alex, "and yours even drew you a card."

True as this was it didn't stop Hothow's position looking decidedly shaky, as the Cloaked Knight brought him rapidly down to six. Alex found a Nomadic Elf, giving him access to red mana, and allowing him first to Singe Dominik's Viashino Grappler, and then to Magma Burst the Familiar and a Kavu Scout, attacking for the win with Llanowar Knight along the way. 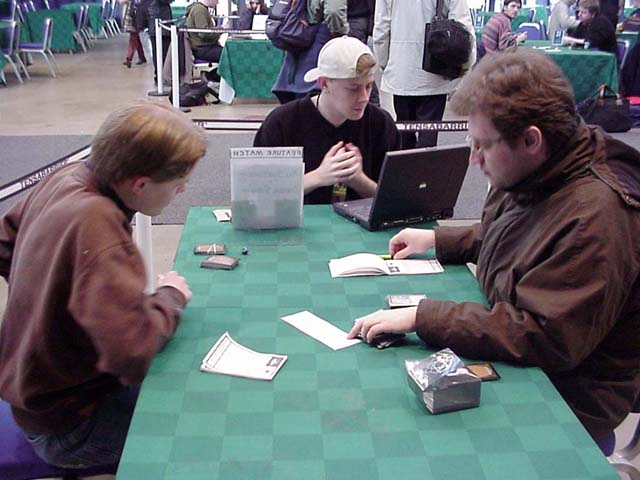 It wouldn't be too unfair to say that the German didn't really show any good cards in the first game, and he chose to play first in the second.

His first play was Trench Wurm on the fourth turn, but Alex hadn't yet played anything at all. His hand was Magma Burst, Armadillo Cloak, and Steel-Leaf Paladin. Shvartsman managed to get a two-for-one with the Burst without sacrificing any land, when Dominik tried to play Scavenged Weaponry on the Wurm.

The American finally found a creature he could cast, a Thornscape Battlemage. "Two to you," he said, and passed the turn. Hothow played a Halam Djinn, and replied "four to you".

Alex stopped the Djinn's beats by returning his Battlemage to his hand and casting Steel-leaf Paladin. All Dominik could do was play a Phyrexian Reaper and a Nightscape Apprentice, although Alex could kill the Apprentice with the Battlemage.

He didn't opt to do this, as he thought the Armadillo Cloak in his hand would be better - he hadn't seen any removal at all from Dominik thus far. The Paladin attacked, and brought Dominik to ten. 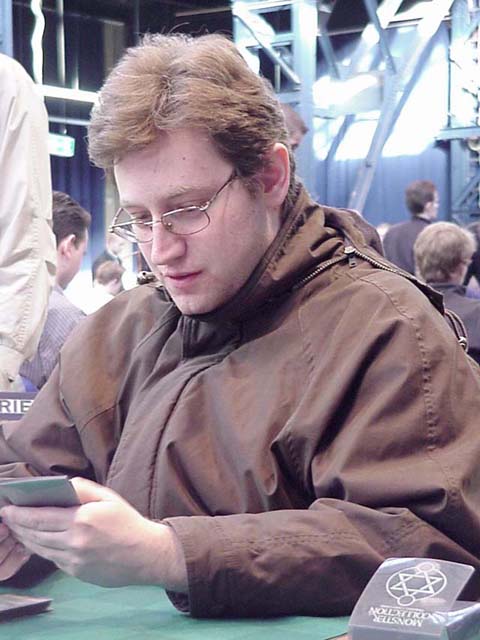 Hothow only attacked with Phyrexian Reaper, hoping to use the Apprentice and Halam Djinn to trade with Steel-leaf Paladin, but Alex destroyed these hopes, casting Singe on the Apprentice at the end of Dominik's turn.

This meant that there was no way the German could kill the Paladin, and took another six damage to go down to four life. Without drawing a way of stopping it, he scooped after drawing a card.