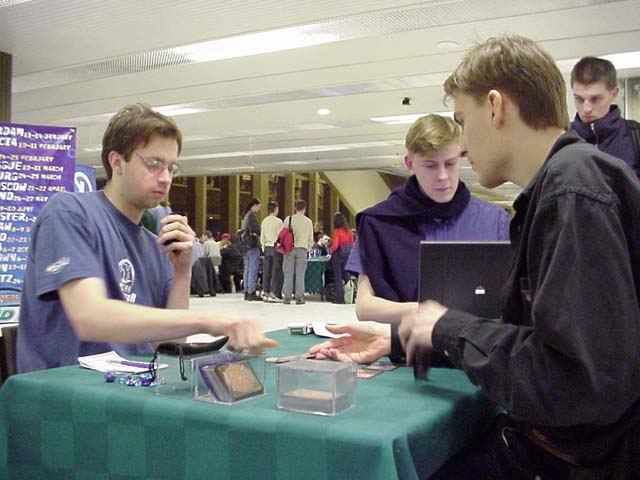 The position facing both of these players were simple - win and you're in. Anything less than a win would definitely eliminate them from the competition.

Bram won the dice roll and decided to go second. He usually plays four or five color green decks in both Sealed and Draft, so perhaps he was up to his old tricks and wanted to have a better chance to draw the right land.

Sure enough his first land was a Forest, followed up by a Mountain and a Might Weaver which was Singed. Despite going second, he didn't have a third land, and could only cast a Scorching Lava on Alexander's Caldera Kavu.

Blumke then followed the Kavu up with Vodalian Zombie, which Bram didn't have an immediate way to deal with this, with only two land his play was Nomadic Elf. The Elf could not block the Zombie due to its Protection from Green, so Alexander enchanted it with Sinister Strength and attacked for five.

Snepvangers drew land number three, but Raging Kavu could not block either, so he attacked for five as well with the Kavu and the Elf. The Swiss ex-World Champion came back over with five more damage of his own and played Anthracite Leech, which looked good to stop Bram's attempts at racing.

The Dutchman still did not have land number four, so could only cast a less-than impressive Slingshot Goblin, and he had to double-block the Leech with Raging Kavu, and Nomadic Elf, taking five from the Vodalian Zombie down to five. Alexander also removed the Slingshot Goblin with an Exotic Curse. Bram could only chump for one more turn with a Sparring Golem before conceding and moving on to the second game.

Once again Bram asked Alexander to play first, but it was Bram who played the first creature of the game - his second turn Quirion Explorer. Alexander had nothing to do on his third turn as well, and Bram attempted to cast a Smoldering Tar. Unfortunately he had failed to spot that Blumke didn't have a Swamp in play, so he couldn't get black mana from his Elf and in fact couldn't cast it.

He chose to play Amphibious Kavu instead, taking a single point of mana burn for his oversight, and then Alexander fetched a Swamp with his Terminal Moraine! 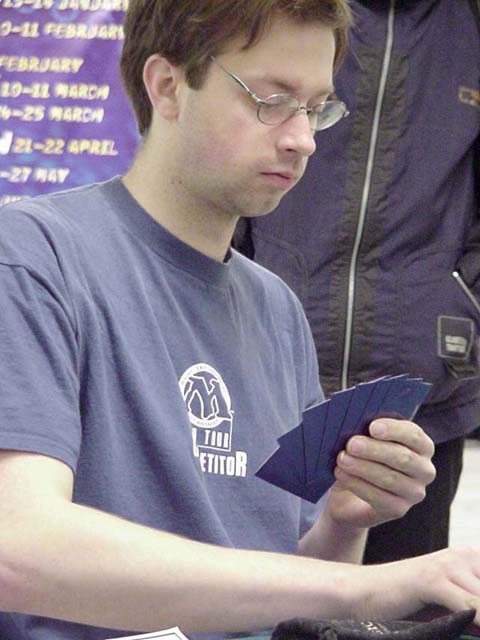 The Swiss player summoned Ancient Kavu, and now Bram was able to cast his Smoldering Tar that he had shown on the previous turn. Bram started to deal damage with his Tar and Amphibious Kavu, Alexander with his Ancient Kavu. Blumke played an Urborg Skeleton with kicker which could hold off the Amphibious Kavu, but not the Sulam Djinn that Bram had on his next turn.

Alexander didn't cast anything on his turn, holding back his mana. The reason for this became clear as he Confounded Bram's attempts to Tribal Flames the Ancient Kavu. After this setback, Snepvangers did not attack with the Djinn, merely playing a Sparring Golem. Perhaps he was hoping to win the game with just his Smoldering Tar.

Alex certainly didn't seem to be able to do anything for a couple of turns about this plan - he cast a Shoreline Raider and used it to play a Cavern Harpy - which could at least begin to attack if Bram didn't do anything about it.

Realizing this, the Dutchman attacked with his Sulam Djinn - which Alexander blocked with all of his creatures. Bram cast Aggressive Urge on the Djinn to make it a 7/7, and then killed the Urborg Skeleton with Darigaaz's Charm after it regenerated. He did lose his Sulam Djinn along the way, though.

Alexander cast an Anthracite Leech and the Shoreline Raider, and attempted to trade the Leech for Sparring Golem, unfortunately, he only managed to trade it for Gaea's Might which Bram used to give his Sparring Golem +3/+3.

Mysteriously, Bram who was on sixteen life, blocked Alexander's Shoreline Raider with his Quirion Explorer. This play was explained when Blumke recast Cavern Harpy, and Bram cast Simoon to force the Harpy back to Alexander's hand, and kill the Shoreline Raider.

This enabled him to start attacking with the Amphibious Kavu and the Sparring Golem. Alexander was able to kill the Kavu with an Exotic Curse, but had no answer to the Sparring Golem, and had to concede after two turns of attacking.

The players went to their third game with only fourteen minutes left in the round - and a draw would eliminate them both from contention, so I expected this game to be played at a high speed.

They certainly shuffled at a high velocity, and Bram started out rapidly as well, with a first turn Thornscape Apprentice, and a second turn Quirion Explorer. These creatures foundered as Alexander played a second turn Vodalian Zombie with the help of a Chromatic Sphere, but Bram once again had Smoldering Tar to start a clock.

Alexander also had ideas of winning the game within the time-limit, as he attacked with his Zombie and summoned Urborg Drake. Bram's Tar brought both players to eighteen - he then cast Benalish Trapper and Sparring Golem.

This time the Urborg Drake came over alone, an Ancient Kavu joining the Swiss defensive team, but neither his Kavu nor his Vodalian Zombie would survive if they blocked the Sparring Golem, as Bram could get red mana from his Explorer and then use his Thornscape Apprentice to give it First Strike.

It seemed that if anyone was going to win the game, it would be Bram. He also played a Nomadic Elf which Blumke managed to remove with Exotic Curse, and Tribal Flames on the Vodalian Zombie. 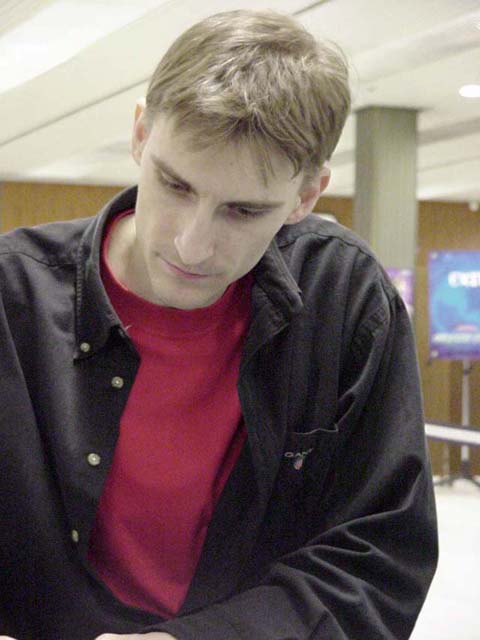 Now Bram could keep the Ancient Kavu tapped down and the Urborg Drake was suicidally forced to attack each turn. Bram brought Alexander down to five, while he himself was on twelve. Blumke cast Repulse on the Trapper, attacked to put Bram on seven, then summoned Shoreline Raider, and Cavern Harpy returning his Urborg Drake.

The Smoldering Tar put him down to four, and Bram used the Tar to remove Shoreline Raider, tapped Cavern Harpy with the Apprentice, attacked and cast Gaea's Might to win the match and a berth in the top 64 for tomorrow.