Round 8 Feature Match: The Ancient Kavus vs. Raw Dogs

The team of Brian Hacker, Gab Tsang and Jeff Cunningham faced off against Mike Pustilnik, Matt Vienneau and Gary Krakower respectively. After a long and grueling day of Magic, this match truly was a test of each team's endurance, as the winners might sneak into day two and would have to be up in a mere six hours for the first Rochester Draft of day two.

Game One: Brian vs. Mike 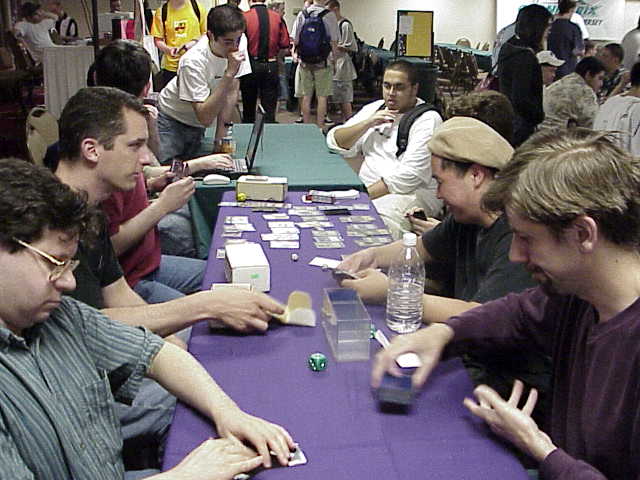 Brian, playing black/red, faced off against Mike playing blue/green. Brian killed a couple of Mike's early and smaller creatures with a Crippling Fatigue, but the good doctor brought out the fatty patrol with an Arrogant Wurm and Rabid Elephant. Brian drew no answers to the huge creatures, and fell quickly to the onslaught.

Game One: Matt vs. Gab

Gab's white/blue deck seemed like a great foil against Matt's red/black deck, as an early Mystic Crusader shut down Matt's entire offense. Matt soon faced even more insurmountable odds, staring down an active Hallowed Healer, Mirror Wall, and Angelic Wall. Matt attempted to get back into the game via Laquatus's Champion and life loss, followed up by a Cabal Torturer to take care of the Healer. Morbid Hunger aced a newly summoned Hydromorph Gull. Things didn't seem so hopeless for Matt anymore, as the wall traded for some blockers, leaving the board nearly cleared. Unfortunately, the Crusader had been taking its toll, and right before Matt could come back fully, Gab reached threshold and played a Mystic Zealot, ending the game.

Once again Gab drew the Crusader, dropping it on turn three. Shortly thereafter, the game was over, as the "Protection from Matt's deck" creature just couldn't be stopped at all. Gab 2-Matt 0 (Raw Dogs 1-The Ancient Kavus 0)

Brian came out a bit faster this game, leading with a Minotaur Explorer (discarding Patchwork Gnomes). It traded with a Basking Rootwalla, and the next play in the game was Brian's turn five Whispering Shade, with four Swamps on board to pump the undead creature. This was followed shortly thereafter by Chainer's Edict and Caustic Tar, making this game as lopsided as the last, except this time the Californian showed the Brooklyn native what the score was.

Game One: Jeff vs. Gary 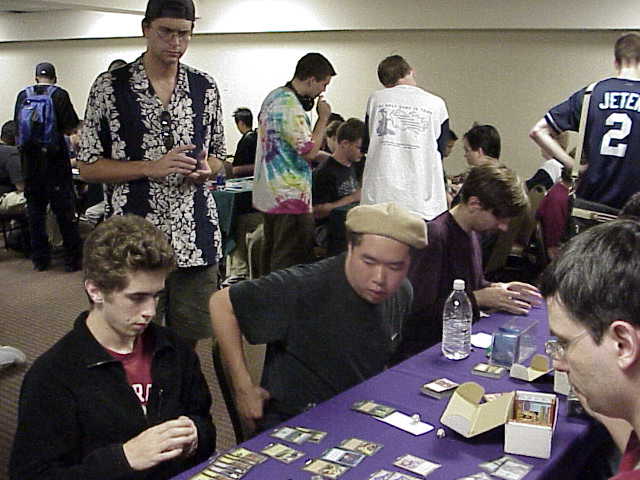 Gary took an early mulligan, but gained a slight tempo pick-up with a Millikin, powering turn three Mystic Zealot in his white/blue deck. Jeff played his forests, and seemed to have a good offense built with Anurid Barkripper, Ironshell Beetle and Basking Rootwalla, bringing Gary to eight while Gary attempted to stabilize. This plan seemed to work, as Gary played Shelter and Prismatic Strands, the latter making life extremely difficult for Jeff's mono-green board. A couple of more turns of fending left Gary without any tricks in hand and at four, but a newly summoned Cephalid Retainer looked to stabilize the board entirely. With a board full of islands, and a Mystic Zealot on offense, Gary nearly completed the comeback over the course of the next few turns, aided by a pair of Teroh's Faithful to put him at a more comfortable double-digit life total. The turn before death, Jeff finally drew his first island of the game, allowing him to Aether Burst the Zealot off the board. Gary promptly replayed it, as Jeff contemplated his next move. It was a Dematerialize, sending the Zealot back to Krakower's hand yet again. Gary drew an Aether Burst of his own, shipping a couple of creatures back to Jeff's hand. This allowed him a turn to tap out to play Aven Flock and Mystic Zealot. With Jeff at two life, the game finally looked to be over. As Gary tapped a Swarmsnapper and Kirtar's Desired the Fogbringer to swing for the win, Jeff revealed a second Aether Burst of his own (third of the game) to bounce both of Gary's flyers and Cephalid Retainer.

On his own turn, Jeff brought a Looter into play, followed with a Cephalid Scout. The Looter came online the following turn as Gary played out two flyers, and then down to the Retainer versus card drawing. Jeff drew four cards between the two Cephalids and his draw phase, but couldn't find a solution and was forced to scoop.

Brian killed all of Mike's early creatures with Lava Dart and Ghastly Demise, and started swinging with a Reckless Charged Filthy Cur. Mike brought a turn five Arrogant Wurm, but it died to a combination of Patriarch's Desire and Firebolt. Caustic Tar hit the board on turn seven, and the game looked to be over before it began. Mikey P topdecked Call of the Herd at a precarious seven life, flashing it back. The board stood at Brian's Caustic Tar and Filthy Cur versus Mike's Elephants. However, a quick combination of Tar, untap, Tar, flashback Firebolt sealed the game despite Mike's best efforts.

Match Win to the Raw Dogs 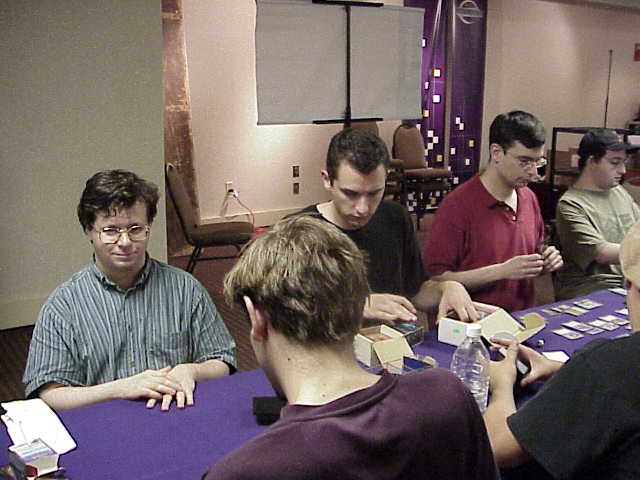 Game one took thirty minutes, leaving only twenty minutes left to play game two. The Gab/Matt thrashing took less time than Gary and Jeff's first game, and the third match was well into the third game while these two were shuffling, so it all came down to whether this game would finish or not.

Jeff started out with the absolutely insane draw of Werebear, Cephalid Looter and Standstill to Gary's nothing. Gary was forced to allow Jeff to draw three cards, but at this point Brian won the match for his team. Playing for tiebreakers at this point, Jeff continued to pound with Wild Mongrel and Possessed Aven (which would have been quite handy the previous game). He then Dematerialized and Aether Bursted all of Gary's blockers and swung with a huge team. Krakower tried to staunch the flow of blood with Sphere of Duty. It didn't work, as Jeff simply destroyed Gary's nearly empty board.

The two raced to finish their match, as Gary wanted to win for pride. Jeff came out fast with Basking Rootwalla and Phantom Nantuko, but they were matched by Cagemail and Lost in Thought. These were trumped by Simplify and Dematerialize (bouncing the enchanted Nantuko) and Jeff looked to take control by replaying his team plus Standstill against Gary's sole Battlewise Aven.

Gary changed his fortunes via a Gallantry, drawing a card against Jeff's three, but killing the Rootwalla in the process, keeping equal card count (Jeff's three card drawn versus the Rootwalla, Gallantry cantrip card, and actual playing of the Standstill). He further complicated matters with a Sphere of Duty and Teroh's Faithful, although the Nantuko continued to make himself larger and larger with each passing turn.

Jeff then thought for a minute, cast Overrun, and swung with a team of rather large Elephants, Squirrels, and Nantukos, ending the game.

1 Call of the Herd 1 Overrun