Playing potentially one of the most lopsided games of the environment, Corney's Nether Go deck was paired up against the flying blue men of Gordon. The "Skies vs. Control" matchups are notorious for the beatings that Skies dishes out to the helpless control players, with their fast weenies backed up by alternate casting cost counters. 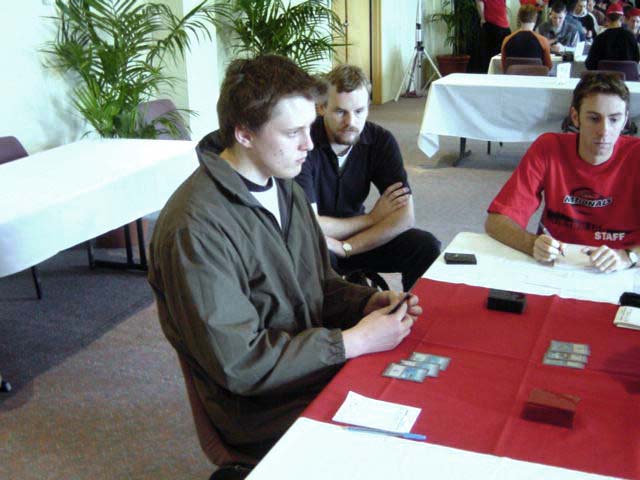 The game began with Corney taking a mulligan and both players laying islands for the first 4 turns of the game, with Gordon opening oh his turn with a Troublesome Spirit. Corney was unable to counter and cast a Fact of Fiction and the end step, netting himself a Swamp, an Island and an Underground River over an Accumulated Knowledge and a Counterspell. The split was obvious as Corney had no swamps in play yet; the only question was whether it was wise to include the island with the black mana.

Corney then untapped and cast Vendetta (which he had chosen to help him in the matchup vs. Skies and Fires), and Gordon let it resolve, dealing Corney the first damage. Gordon then Gushed in his main phase, floating two mana, and used it to try and cast a Rishadan Airship, which Corney quickly countered. In an attempt to lure out a counter, Corney cast a Lobotomy and was a little surprised when it resolved, but after seeing in Gordon's hand 5 Islands, Gush and Thwart, he knew why.

He chose to take the Thwart, a move which he later questioned because Gordon was obviously short of threats. Gordon then main phase Gushed again, this time dropping the Troublesome Spirit that he had drawn, and it made it into play. Corney then chose to Cremate the one Spirit in the graveyard, which was a sign for what would come. Unfortunately for him the other Spirits must have known and they started floating to the top of Gordon's deck. A Recoil only delayed the inevitable as Corney Fact or Fictioned and accumulated his knowledge in vein as the Spirits beat him down.

Game 2 again started with Corney short on black mana as he Power Sunk a turn 2 Spiketail Hatchling. Corney was then forced to main-phase Accumulated Knowledge to try and gain the swamp which he so desperately needed; he got one and played it. Gordon then thought for a while, floated two mana and Gushed, obviously lacking the 3rd Island he needs to really get the deck rolling.

He then replayed an Island and snuck through a Chimeric Idol. Corney failed to draw a land and passed the turn to Gordon who had his Hatchling Undermined. Corney then drew an Underground River, hard cast his Nether Spirit, and was punished by Gordon who untapped and dropped a monster, Rising Waters. Corney groaned a little and was forced to cast Accumulated Knowledge again short of land, making the Rising Waters even more crucial.

Gordon stacked his Rising Waters and activated the Idol in response proving that he's not just some scrub with a net deck he found, and one turn later he dropped down a Troublesome Spirit. Corney tried to Vendetta it and a counter war ensued. A Thwart from Gordon was Misdirected by Corney which was then Foiled by Gordon, which got Counterspelled by Corney.

Cool as a cucumber, Gordon discarded 2 more cards and announced his second Foil, much to Corney's dismay. With damage now pushing through and a Rising Waters keeping Corney locked down, Corney needed to draw a land in his draw phase so he could Spite/Malice the Troublesome Spirit. Unfortunately for him, he didn't and Gordon took the game and the match.