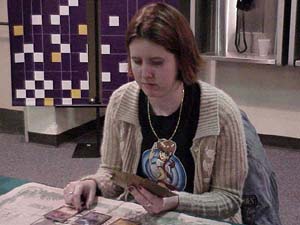 This Round 8 feature match showcased Becky Hiebert and Alan Comer. Alan is from South Cali, which is also where Becky grew up. She has since moved to Boston and plays regularly at Your Move Games. The two are very familiar with each other and this reporter even had the pleasure to eat dinner with both of them at the recent PT Chicago.

Alan started out Saturday 5-0 and ran into a series of pros where his luck dried up. They are both currently 5-2 and playing for a slim chance at drafting tomorrow. They shuffled and Alan won the die roll, electing to play. They both kept two-land hands. Alan dropped turn two Nomadic Elf. Becky drew more land and played Kavu Recluse. Alan had only drawn forest and used the elf's ability to produce red and Strafe the Recluse. This unfortunately isn't legal and Alan opted to Maniacal Rage his elf instead. Becky was holding Terminate and untapped and killed the 4/4. Alan passed the turn without doing anything. Becky attacked again and gated the Recluse with Horned Kavu. The next few turns consisted of Becky playing more creatures and Alan not doing anything. The game ended with Becky holding Tribal Flames and Exotic Curse with multiple creatures in play.

Alan sideboarded out the Maniacal Rage for a Bog Down. Becky sided in Slay in place of Kavu Recluse. Alan elected to draw the second game in hope of not getting mana screwed again. 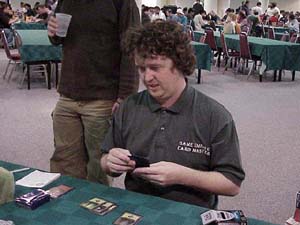 Becky played a turn two Thunderscape Familiar which Alan untapped and Scorching Lavaed. Becky then played a turn four Ancient Kavu. Alan then played and attacked with his own Kavu Runner. Becky held back with her kavu because she had a Gaea's Might in her hand. She traded the might for the runner. Alan played a Serpentine Kavu which Becky Slayed. That was just about the last play Alan really made. Becky played a Darigaaz and Alan drew some more land. Darigaaz attacked along with the Ancient Kavu. Darigaaz revealed that Alan was terribly mana flooded and had few if any hopes at winning.

The match was very short with Alan horribly mana screwed and Becky dropping bombs. Alan was still very cheerful and Becky was also very happy. They played a third game for fun in which Becky dropped Darigaaz once again and won. The standings will tell if Becky makes Top 64 but it is very unlikely. Becky would like to say "Hi!" to all the people in #mtgwacky.