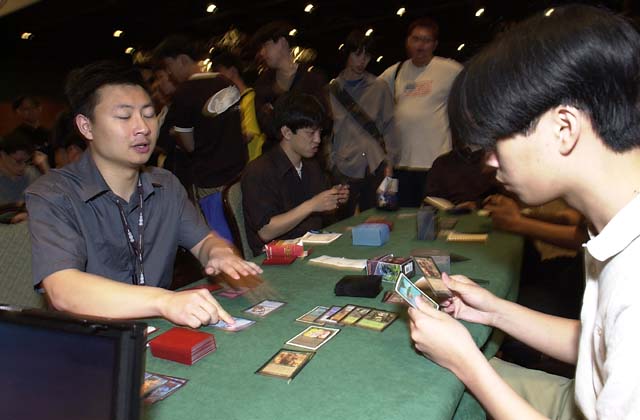 As he shuffled for the first game, Ben Seck related an interesting anecdote on how he actually managed to attend this event. As a student he was short of money (aren't they always?) and had not planned on attending, but one evening a friend suggested they go to the casino for some good times. With no cash, Seck was a sterling example of youthful restraint but was convinced when his friend loaned him $100 so he could have some fun. Realizing that $100 wouldn't last long at a blackjack table, Seck took it to the slots and all of a sudden he had hit the jackpot and won 7,000 Australian dollars! Taking it as a sign that he should visit Malaysia, he decided to come and play.

Yujian Zhou has played in three previous APACs, finishing tenth one year. He qualified for this one on ranking but unfortunately had no tale of adventure to share with the Sideboard.

Zhou led with forest, Elf, giving everyone a good idea of what he was playing. Seck's island opening was a bit more oblique, and his end of turn Opt revealed nothing more than he was probably playing control of some sort. Following up the Birds with an unkicked Thornscape Battlemage, Zhou seemed pretty confident that Seck wasn't playing many creatures he could target and early aggression was probably important.

After countering a Saproling Burst, Seck declared that it was "like a Hitchcock film" as he dropped a Thieving Magpie to fill the sky with birds. Zhou's attempt to Flametongue was Thwarted as Seck returned many islands to his hand.

Zhou was unable to put up much pressure against the giant 1/3 bird with only an Elf and the Battlemage able to attack. But this changed as he attempted to cast Thunderscape Battlemage with black kicker to regain card advantage. Seck had the Counterspell and then declared, "it was time to go to China" as he attacked with the Magpie and brought out the "Great Wall" - Glacial Wall. Discarding Mahamoti to Foil a second Battlemage, Seck seemed confident as he drew two cards each turn while controlling the ground.

A third Battlemage, this time green, seemed less than threatening, but Seck "Time Warped" it anyways with Memory Lapse. Zhou, in an attempt to maintain board parity, continued to sacrifice Birds of Paradise to the blue crow. As he related potentially untrue stories involving magpie attacks on humans in Australia, Seck continued to "Do The Time Warp Again" by Memory Lapsing the Battlemage a second time.

With a Glacial Wall in play, Seck had no problem with Zhou playing a Blastoderm, and all were delighted as Zhou's Illuminati card tokens came into play. Sporting "Al Gore", "Prince Charles" and "Saddam Hussein", the Blastoderm appeared much more threatening than it actually was. One can only imagine that a "George Bush" token might have been more effective, if not as popular! 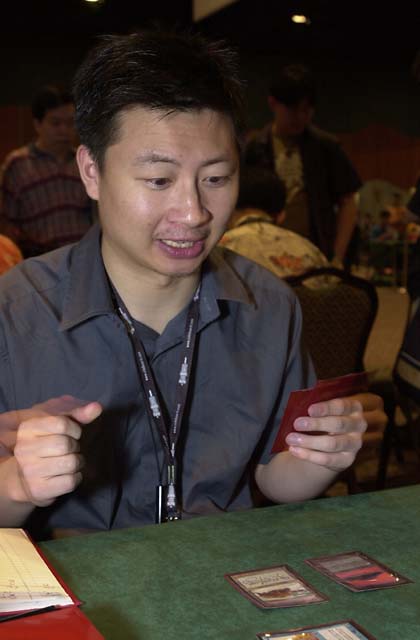 Zhou's attempt to finish off the Wall with a Thornscape Battlemage after attacking with the Blastoderm was Foiled as Seck continued to attack with two Magpies. He attempted the same trick next turn with Flametongue and was again unsuccessful. To make the situation even more difficult, Seck played a second Wall.

Drawing three cards a turn plus extra cards from Accumulated Knowledge, Seck seemed to have the game well in hand but Zhou would not concede as he continued to try and play threats, finally killing the first wall with another Battlemage. In order to convince that time would be better spent, Seck presented the "Mahamoti Djinn" argument, and it was very convincing as Zhou quickly scooped.

Seck attributed his deck design to Adrian Sullivan who spent many hours before the event going through all the matchups with Seck. If Seck makes Top 8, Sullivan stands to profit with 5% of his winnings. In an attempt to single-handedly shift the metagame, Seck spent the past two days trying to convince Fires players that they would have no need for Yavimaya Barbarians main deck as it would make them lose the very popular mirrors. We'll see by the end of the day whether he was successful.

After revealing that yes, he was indeed playing with 61 cards, Zhou chose to play. With the standard Fires opening of Llanowar Elf followed by turn three Blastoderm, Zhou looked to be in good shape, but again he was Memory Lapsed. Seck used Sleight of Hand the next turn, though he still didn't find a third island.

With only one island untapped on Seck's side, Zhou was able to put the Blastoderm into play. Desperate to draw solutions, Seck Accumulated Knowledged at the end of turn, but was punished for this with a Blood Oath naming "instants". With only two instants in hand, Seck still chose to discard an island and Bribery to Foil the Oath. He followed this up with a Glacial Wall that traded with a Flametongue and Blastoderm hit.

A second Wall looked like it might give the time he needed but Zhou brought out a Saproling Burst and Seck was forced to concede.

Seck berated himself after the game for Foiling the Blood Oath when he could have easily taken six points of damage and kept the counter for the Flametongue. While normally he may be able to make that kind of mistake, when combined with not playing a third land on turn three, Seck's deck was unforgiving. 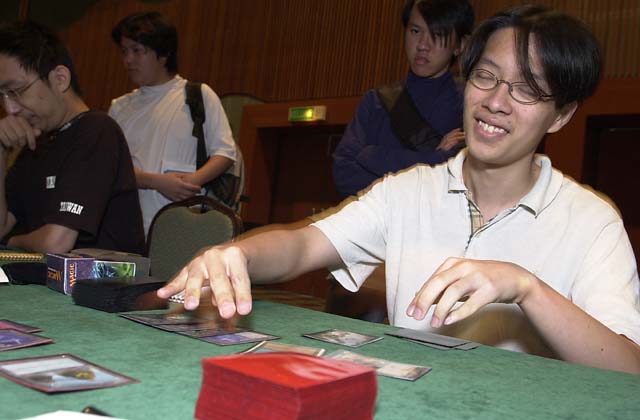 On Adrian's recommendation, Seck kept his opening hand of one island, Opt and Sleight of Hand. Adrian appeared correct as Seck drew an island in his draw phase but he didn't have the counter for Fires of Yavimaya that he wanted. He was able to Opt and he kept a Memory Lapse over trying to dig deeper for a third island. The Memory Lapse bought him a turn countering a Blastoderm but he still didn't find the elusive third island and Zhou took advantage with a Saproling Burst that was also Lapsed.

Still unable to draw an island, Zhou again attempted the Burst and this time it was fully countered with a Counterspell. On the next turn not only did Seck not have the third island, he longer had a counterspell and expected the Blastoderm to come back into play and attack for five with haste. But when Zhou just let him go Seck knew he was going to see a Blood Oath and sure enough, a Blood Oath naming "instants" was cast after Ben played Accumulated Knowledge for that elusive third island. Zhou named creatures and struck gold for 12 damage as Seck was holding three Walls and a Magpie alongside Thwart, Foil and Repulse.

Finally drawing the island, Seck was able to play out a wall but it couldn't stop the Birds of Paradise with +2/+2 from the Fires accompanied by a Urza's Rage to finish him off.

Seck held no bitterness for Adrian's advice arguing that he was just extremely unlucky that game and normally he would have been able to cantrip into the island.