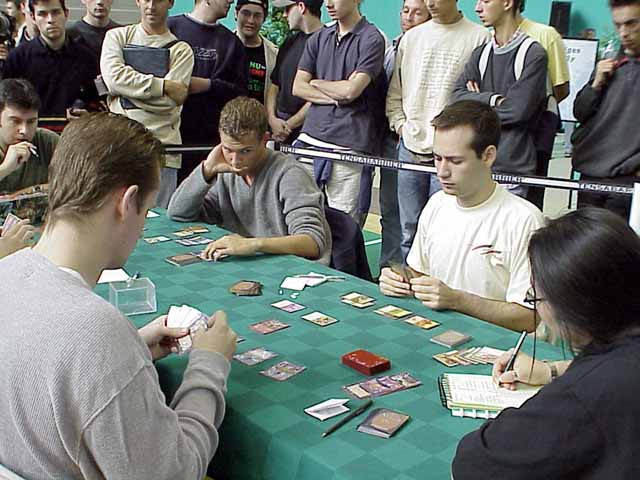 In the first round of the second day, Pro Tour Player of the Year faced off against the Spanish Pro Tour Veteran Carlos Barrado. Bob had a red and black deck with quite a few Mercenaries, an Avatar of Fury, and some removal, while Carlos had gone Rebels with red for removal and some creatures, for instance a Rock Badger and an Ancient Hydra.

Barrado won the die roll and chose to play. The two players played some lands, and then Barrado got out a Ramosian Captain. Bob answered by playing an Alley Grifters, and the Captain died to a Rhystic Lightning after just one attack. A Reveille Squad took its place though, and then a Defender en-Vec came to help out temporarily while Bob summoned a Flowstone Wall for some defense.

Carlos had more up his sleeve though. He made a Seal of Fire and then a Mercenary Informer, and soon, Maher's Alley Grifters found themselves on the bottom of his library. Maher got out a Ridgeline Rager and a Zerapa Minotaur, but Barrado had a Troubled Healer. And when Maher used his Zerapa Minotaur to block the Informer, Carlos had the Cho-Manno's Blessing and made the Informer immune to the red damage before finishing off the Minotaur with his Seal of Fire.

But Maher wasn't about to give up easily. A Massacre wiped out the Troubled Healer and the Informer, and a Rathi Fiend came to help, unfortunately knocking Maher down to six live in the process. It didn't last long either, as Barrado had another Seal of Fire to kill it.

Barrado figured it was time for some Rebel action again. He summoned a Ramosian Sergeant, who fetched a Ramosian Lieutenant. The Lieutenant and the Reveille Squad threw themselves at the attacking Kyren Sniper and Alley Grifters, but died a horrible death to a Dark Triumph.

After the battle, the two players cast creatures for a while before going draw-go for a while. Carlos got out a Troubled Healer, a Lightbringer and a Pious Warrior, while Bob summoned two Spur Grapplers and then later a Kris Mage that killed Carlos' Ramosian Sergeant. Carlos then attacked with the Pious Warrior just to see it stomp head first into the Flowstone Wall. A Mogg Toady came into play to throw itself in front of one of Barrado's attackers, an attacker that survived thanks to an amazing Healer in Barrado's front line. Then a Devout Witness came to see the end of it.

Barrado sent his Pious Warrior, his Lightbringer and his Devout Witness in. Maher chose to kill the Healer with a Seal of Doom before declaring blockers, and still on six life, he blocked all the creatures. Barrado tried to Rlaming Sword the Lightbringer to save it and kill the Spur Grappler that blocked it, but Maher had the Vendetta and saved his creature. Unfortunately, Barrado also had a Rock Badger, and the mountainwalk was just too much to handle for Maher.

Maher chose to play first in the second game. He got out a turn three Skulking Fugitive and a turn four Rathi Fiend. An Alabaster Wall killed the Fiend though, and then a Pious Warrior forced the Rathi Fiend to stay at home instead of attacking. In addition, Barrado summoned a Lightbringer.

Maher got the Fiend to recruit an Alley Grifters. Then he played a Kyren Sniper and a Zerapa Minotaur. The Fiend didn't manage to recruit more Mercenaries though. It was Toppled by Barrado, who then continued to send his creatures over, using a Lightning Strike to get rid of the Minotaur. But Maher had some tricks, too. He completely wiped the table by casting his Dark Triumph and then Massacre and a Seal of Fire, hoping to get a new start.

Unfortunately, Barrado had more good cards in his deck, and an Ancient Hydra hit the table. Then everything happened really, really fast. Maher summoned an Alley Grifters and an Avatar of Fury. Barrado attacked with his Hydra, killing the Avatar and putting Maher at five. He then got out his Rock Badger and an Arc Mage, and soon after, the match was over and the players were shaking hands.