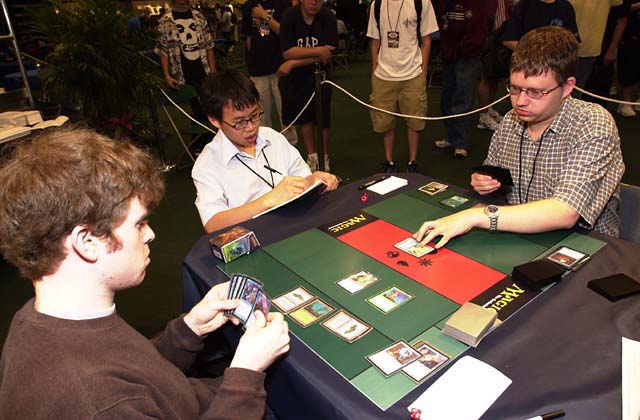 Last year at Nationals Andrew Johnson handed Daniel Clegg a deck that he had never seen before on the morning of Day 2. Clegg proceeded to go 5-1 with what would become known as "Angry Hermit" and finish a respectable 32nd. So when Clegg was shown a new deck by friends from Texas, he didn't hesitate to play it. "I did the exact same thing last year, and look what happened," Clegg said.

Lawrence Creech is the leader in this year's Rookie of the Year race. After placing in the Top 32 at Chicago-2001, his first Pro Tour, he went on to surprise many and finish in the Top 8 at Pro Tour-Los Angeles. A solid finish in Tokyo solidified his place on the Train.

Creech and Clegg have actually been friends for a while. Clegg spent a few days in Creech's hometown of Chester, Virginia-also the home of Pro Tour great Kyle Rose. Clegg was traveling around the world, staying with friends and looking for a place to live. Rose told him that he should move to Chester-"We've got everything you need here," Rose told him. "We have bowling alley, we have a movie theater, we even have a Sizzler's!"

Clegg has been performing at a very high level during the 2000-2001 season, coming in 3rd at the Team Pro Tour in New York as a member of Rolled-Up Aces as well as in Barcelona. His team, "Team Clegg," won Grand Prix Turin and he has Top 4's at Grand Prix Dallas and Grand Prix Detroit also to his credit.

Before the rounds started, Creech and Clegg sat down and chatted amiably, looking through each other's decks and discussing the field. So Creech knew exactly what to expect out of Clegg's deck. Creech chose to play a deck similar to the one he played in Chicago: a blue Draw-Go variant that splashes black for Tsabo's Decree and various sideboard cards, that kills with Mahamoti Djinn. Clegg is playing a blue-green Static Orb-Opposition deck with counters, card drawing, and Spontaneous Generation for the lock and the kill. 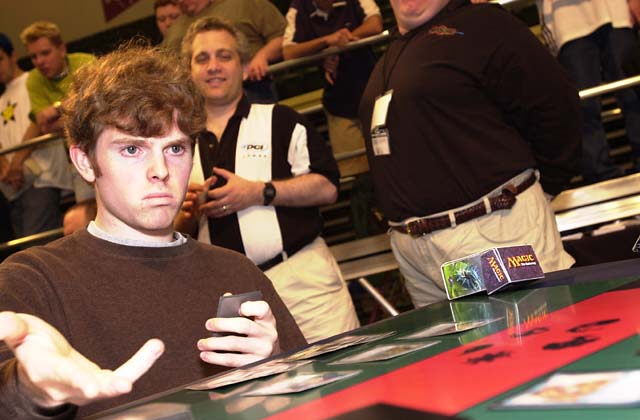 Clegg won the die roll and chose to play first. Both players did nothing but lay land and cast end-of-turn search. On Creech's 3rd upkeep, Clegg cast an Accumulated Knowledge (he has one in his graveyard)-possibly hoping that Creech would counter it. Creech did not. He laid a land and passed his turn. Clegg began singing to Creech: "Sorry that I have to do this to you, oh Creech." He could see the outcome of the turn's play clearly in his head. He laid a third island to go along with his lone forest, and tapped them all, casting Spontaneous Generation. Creech had two islands and an Underground River untapped, and he thought for a moment before tapping the islands and casting Counterspell. Clegg then cast Thwart, returning three islands to his hand. Spontaneous Generation checks on resolution, and since Creech had no other effects to put on the stack, Clegg put eight Saproling tokens into play. Creech drew and conceded.

Both players took their time to sideboard, exchanging small talk and discussing Chester, Virginia. Creech sided in his two Hibernations, his Millstones, his Disrupts, and his Temporal Adepts. Clegg puts in his Prodigal Sorcerers, his Mana Mazes, and his Gainsays.

Creech decided to play first. On his second turn Clegg tapped out to play Mana Maze; Creech Memory Lapsed it. On his turn he cast a main phase Opt, looking for an answer to the Mana Maze. He kept the first card. Clegg drew, and recast Mana Maze. Creech has no responses. This seems very touch for a monoblue deck to deal with, but Creech seemed unfazed. "I figure it would help me get my Millstones out easily," he said later.

On his next turn, Clegg followed up his Mana Maze with a Prodigal Sorcerer. Due to Mana Maze, blue spells cannot be countered, nor can any spells followed immediately with a blue instant. Creech began casting search spells during Clegg's upkeep to prevent him from casting any blue spells during his main phase-namely, Opposition. Clegg has missed a couple of land drops and has to content himself with shooting Creech with his Tim every turn. On his sixth turn, Creech cast a Mahamoti without fear of it being countered, in the hopes of ending the game quickly. Clegg, in an effort to keep up with the race, cast a Spontaneous Generation and Gushed in response, bringing eight Saprolings into play. Creech had the answer in the form of Hibernation-one of two that he drew in his opening hand-destroying all of Clegg's men. Creech then cast a Millstone, protecting it with an Opt. The race between the Moti and the Tim seemed a bit unfair. 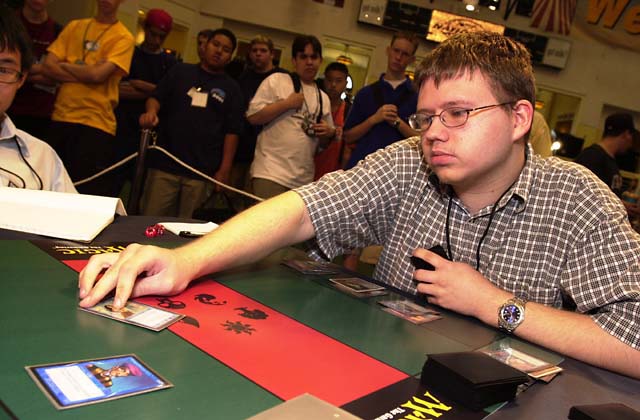 Clegg then drew an Opposition, which not only could not be countered but also provided Clegg with an answer to Moti, with his Tim in play. Creech cast a Temporal Adept, in the hopes of forcing Clegg to shoot it down with the Sorcerer and getting five more damage through. But Clegg had other plans; he cast a Spontaneous Generation, and Gushed in response, creating 9 Saproling Tokens. He then shot off the Adept with his Tim. Clegg looked like he was gaining rapid control of the game, tapping all of Creech's lands and his Moti during his upkeep. During Creech's turn, Clegg cast an Opt, thinking that Creech only had a turn or two to deal with the problems at hand. Clegg, doing the math, decided to attack with five Saproling Tokens, bringing Creech down to 12. Creech, during Clegg's upkeep, cast Hibernation, destroying all of Clegg's tokens again. Clegg cast a second Tim. The game slowed down after this, the next several turns consisting of nothing other than Creech milling Clegg and declaring an attack, only to have his Moti tapped by one of the Tims, and Clegg shooting Creech with the other Tim-a race between the Millstone and one Tim. Creech managed to mill away Clegg's third Generation, forcing him to win almost exclusively with what was on the board. In the middle of this lull, Creech cast a Fact of Fiction, turning over five counterspells-a Foil, two Thwarts, and two Counterspells. Clegg quickly surveyed the cards flipped. "Wow," he said, "this is all garbage." He paused for a second to consider the number of lands that Creech had in play, the number of cards in hand, and all other conditions-he wondered, "What Would Warren Marsh Do?" He split them into Counterspells and four-casting cost counterspells; Creech took the latter, because "it was a bigger pile."

Creech tried to stir things by casting a Temporal Adept. Even though it would be killed by the Tims in play, it would buy Creech an extra turn, and hopefully swing the race-will Clegg get milled or will Creech get killed-into his favor. Clegg shot the Adept, and it looked like the race would be a little closer. But it didn't matter; Clegg drew a sideboarded Rushing River, and returned the Moti and the Millstone to Creech's hand during his upkeep. He had to cast the Millstone first, since the last spell cast was Rushing River (due to the Mana Maze), but he had nothing to back it up with. "If you counter the Millstone, I lose," Creech said, a little dejectedly. Clegg did. Creech conceded soon after.