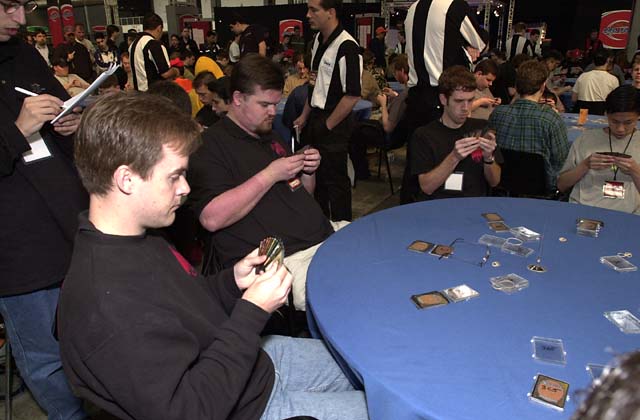 Chad Ellis, Darwin Kastle, and Chris Manning in the draft

When you are a part of one the more successful teams in Magic you are bound to find yourself in the situation Darwin and Chad faced this morning. They were both on the same table and fate decided to sit them right next to each other with fellow YMG Chris Manning flanking Kastle on the left side.

In fact the table looked a bit like a game like a celebrity deathmatch with Shawn "Hammer" Regnier, Tommi Hovi and Chris Benafel sitting on the right side of Chad Ellis. While they were waiting to start the draft the American players traded a few jokes while the two Asian players and Hovi just smiled perhaps still recovering from the long Friday.

Fate doesn't give you only sweet treats. After the draft Kastle and Ellis were in for a nasty surprise when they found out that they were playing against each other in the eighth round.

Kastle's opening booster was very weak with only a Fact or Fiction as an outstanding card. Ellis, on the other hand had a Spite/Malice, Thornscape Apprentice, Obsidian Acolyte, Wash Out and Power Armor to choose from. He took the Spite/Malice and got a signal to stick to those colors when Benafel passed him an Exotic Curse. He spent a good part of the first booster showing great determination, often passing Kastle great cards, to stick to Blue-White-Black.

Darwin was more than happy to collect the Power Armor, two Soul Burns, Plague Spores, Hypnotic Cloud, Opt and even a Vodalian Serpent. That Serpent was the third to sail Ellis's way and with two in his draft pile already he had no need to take another one.

Mandel, downstream from Kastle, was happy as well beefing up his Green-Red deck with all the cards his two teammates didn't want. On the second booster Chad opened Darigaaz, the Igniter but decided not to change colors to please the legend and passed it out to Chris Benafel. He had previously taken a Molimo, Maro Sorcerer so it fit right in the process of building a monster deck. 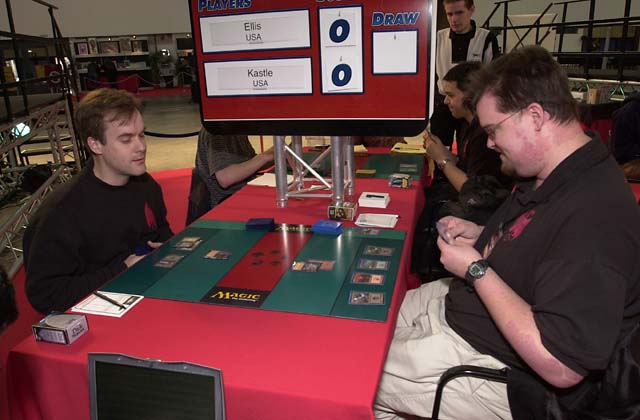 The start of the second pack was very rewarding for both players, with Kastle getting Shivan Emissary, a third Soul Burn, two Shivan Zombies and a myriad of small Black-Red creatures. Ellis took an Exotic Curse over the dragon followed by a Probe, Stormscape Apprentice and Reviving Vapors as highlights of the second pack.

The third pack started with Kastle having to pick between Rushing River, Mire Kavu and Nightscape Familiar. He took the River and Ellis handed him a Terminate from a pack containing a Samite Pilgrim (the card Chad took), Aurora Griffin and a Gerrard's Command. Chad then went into bomb mode getting a Marsh Crocodile and a Cavern Harpy while Darwin got a Hunting Drake, Nightscape Battlemage (Chad would have loved that but it came in the same pack as the other half of the combo: the Harpy) and a Volcano Imp.

Two very, very late Morgue Toads sealed off Kastle's horde. His deck is a bunch of fast dorks with a Terminate, Rushing River, Shivan Emissary, Plague Spores and three Soul Burns to make sure they have a clean path to work with. The three Soul Burns also mean he can sit back if he gets locked out of his combat phase and just drain his opponent to death.

Chad Ellis's deck is very controllish with two Exotic Curses, Spite/Malice and Hobble as pure creature control but his two Vodalian Serpents, Samite Pilgrim and a Stormscape Apprentice help stop almost any attacker. Given the time, his Cavern Harpy and Marsh Crocodile can also cause a world of trouble.

Darwin: "So you know my deck. Scared?"
Chad: "Not really, your deck is poopy. It only has good creatures and good spells."

After a quick rundown of the playmat by Mark Rosewater the shuffling process began with concentrated silence. Darwin won the roll and chose to start. Surprisingly, he had no early play and it was Chad's honor to cast the first spell: a Ravenous Rats that nailed an Island.

But Kastle's first spell was big: a Mire Kavu. Chad reduced it with a Exotic Curse that couldn't quite kill the Kavu. Kastle used a Lava Zombie to rescue his Kavu before Ellis could kill it by playing a third basic land type. Ellis finally drew his first Island on the following turn and locked the Zombie under a Hobble.

Chad: "You are the meanest, who gates a locked Kavu?"
Chad: "That guy is SO not doing anything today." (while gating the Lava Zombie)

Kastle used a Nightscape Battlemage to blow up Chad's lonely Island trying to lock him out of Blue mana. Chad, however, could still play a Razorfoot Griffin that lapsed Darwin into deep thought. He then replayed the Mire Kavu getting ready go to into the Red Zone.

Ellis had yet another defensive spell: Samite Pilgrim. Still only with Plains and Swamps Chad was keeping Kastle out of the Red Zone and thus winning precious time to find the mana base to bring on his power spells. The Mire Kavu attacked drawing the following answer:

Chad: "Bruises on the stack?"

A Soul Burn tried to take out the Pilgrim but Chad had a Pollen Remedy to save his key creature. Another Exotic Curse made an appearance and once again the Kavu was sick but not quite dead, now reduced to a 2/1. Darwin played a Fact or Fiction hoping to find something to break through Chad's defenses before he ran out of time. Here are the piles:

Darwin quickly took the bigger pile and passed the turn. At the end of Chad's uneventful turn, the Pilgrim was Terminated and a Shivan Emissary on the next turn gave a kicked death to the Griffin. The Battlemage could now roam free in the Red Zone. Down to one creature, the Ravenous Rats with a Sisay's Ingenuity, and with no visible answers Chad faced three incoming creatures on the next turn. 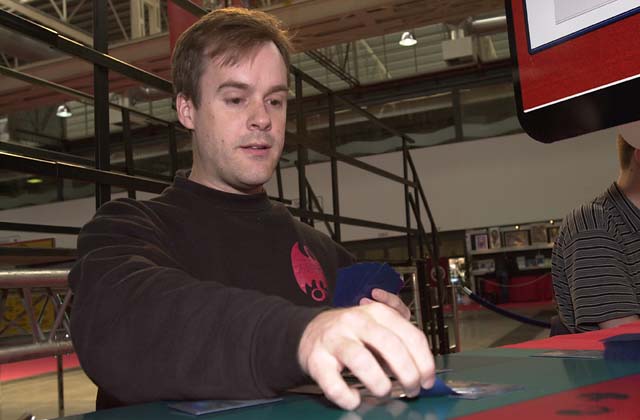 He traded the Rats for the Emissary and Kastle pressed on with the Phyrexian Slayer and the Rogue Kavu. Chad drew his card and conceded. if Kastle hadn't blown the Island on that turn Chad would have played a Probe with kicker drawing into the magical sixth land. That would allowed him to play back to back Vodalian Serpents that would certainly buy him a ton of time to establish his game.

As they reached for their sideboards they discussed the first game, their drafts and had the following conversation:

Kastle: "I thought White was your tertiary color."
Chad: "Well, I have two tertiary colors."
Kastle: "Oh, you're trying to mess with me. Chad is not my friend."
Chad: "I don't think you can look at your deck and say that I'm not your friend."
Kastle: "True, very true."

As you can see the round was a pleasure to watch. Afterwards they went into their respective sideboards think tanks and emerged straight into the shuffling marathon.

This time Kastle found a second turn drop in the shape of a Shivan Zombie. Chad also tried something different by getting all his three colors and playing an early Galina's Knight. Darwin's army grew with a Hooded Kavu and evasion creatures traded blows until Ellis played his Cavern Harpy.

The Harpy forced Kastle to sit back and he took the time to play a Phyrexian Slayer. The respite gave Chad something to think about and after consulting life totals he replayed his Galina's Knight and debated between Exotic Curse and Sinister Strength. He finally turned his Knight into a protection from Red 5/3 machine. Darwin was deeply pressed to compete with that kind of creature and the best he could muster was a second Shivan Zombie.

The Knight went into the Red Zone for a huge chunk of Kastle's life and Chad dropped another flier: Rainbow Crow. It didn't last long because Darwin Terminated it to clear the path for his whole army to march into the Red Zone. The Harpy blocked the Slayer and bounced back to Chad's hand putting him down to nine. Darwin ended his turn by rebuilding his army with yet another Hooded Kavu. 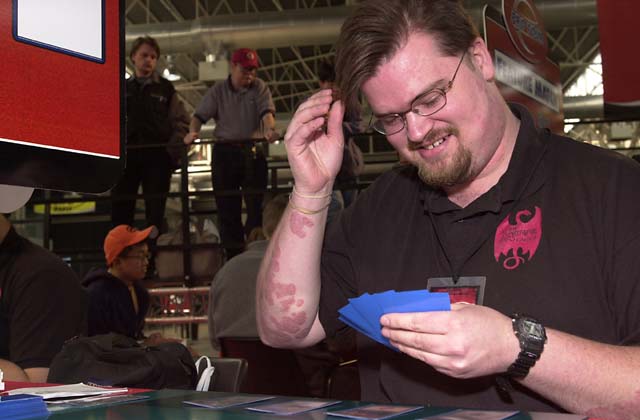 With the game winding down both players lapsed into silence while considering all possibilities under the close scrutiny of the crowd. Chad had an Exotic Curse in his hand and after a long deliberation used it to get rid of one of the Kavus. The doubt now was if he needed to replay the Harpy, which would force him to bounce the Knight thus losing the Sinister Strength. He chose not to and may have regretted it when Darwin played a Nightscape Battlemage using the red kicker to blow Chad's lone blue source.

The Knight took out a Shivan Zombie in the next swing and with no answer from Chad, Kastle dropped the bomb: Power Armor. Since Chad now had no blue mana he couldn't use the Spite/Malice he had drawn the previous turn. Darwin pumped the Shivan Zombie to avoiding exactly that card and won the game.

After the end of the Feature Match they talked about their sideboard options, Chad lack of luck drawing Islands and ironic game situations. A great match between two good friends. Too bad Chad's mana problems prevent him from showing his deck's true colors.