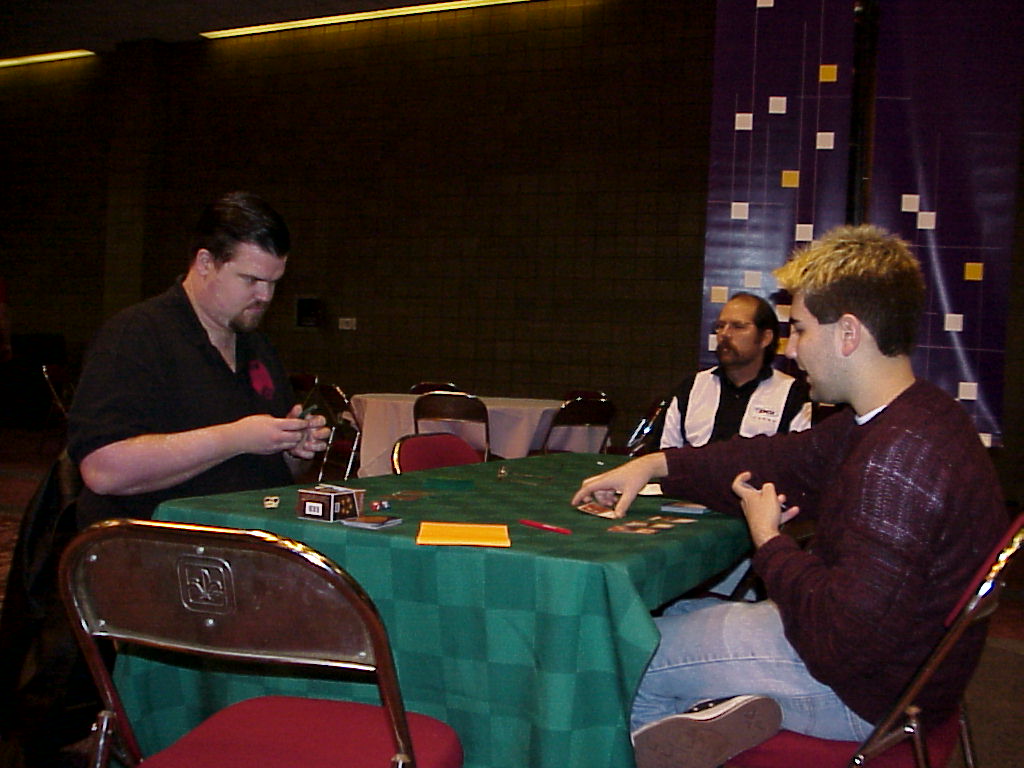 At the moment, Mouth may not be familiar to you. In fact, this is his first feature match. However, he is well respected by other Massachusetts players. Kastle even commented that Mouth is one of the players he is least happy to see as his opponent at Boston events.

This time around, Darwin has little to worry about. Mouth drafted a white-green deck splashing some red and blue (easily done with Harrow and other green mana production). He has a number of 'tappers' and some decent removal spells, but the deck is certainly not far above average.

Darwin's deck on the other hand, is a powerhouse. He has three Plague Spores. He has three Faerie Squadrons. He has Fact or Fiction, Annihilate, and Blazing Specter. His deck is about as good as the U/B/r strategy favored by Your Move Games gets. 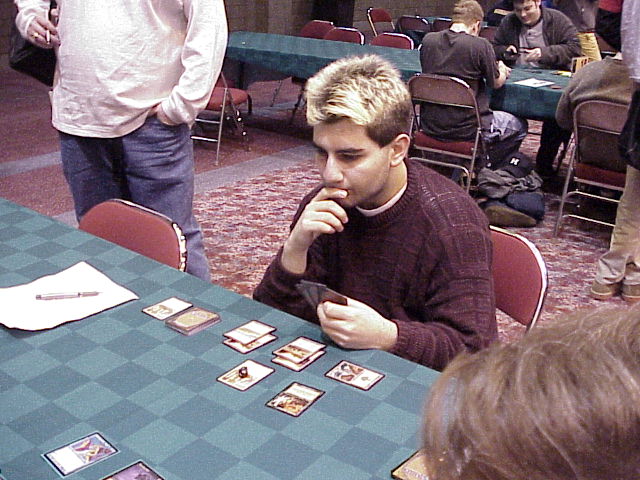 In the first game Mouth got off to an excellent start. He opened with a Spirit Weaver, and followed it up with Sparring Golem and Benalish Trapper. Kastle's first play was an Urborg Drake, but Drake was no good at holding off Mouth's creatures. To top it off, Kastle missed a land drop, casting Ravenous Rats on the turn after the Drake.

Mouth, who did not have any more threats in his hand, decided to play very aggressively, trying to take advantage of Kastle's poor mana draw. He used Tribal Flames to remove the Rat and attacked with his creatures.

On the following turn Kastle drew precisely what he needed - a Mountain. This allowed him to cast Zap, removing a Spirit Weaver and drawing another card in an effort to find land. Mouth summoned a Thunderscape Apprentice and attacked for 3 with his Golem and Trapper, reducing Kastle's life total to ten. 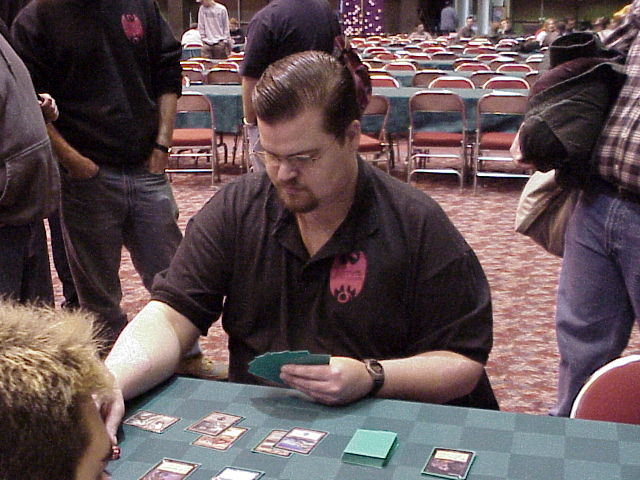 On the next turn Kastle played his fifth land and cast yet another cantrip - an Annihilate - removing the Sparring Golem.

Although Kastle missed a land drop, high quality removal and effective card advantage allowed him not only to get back into the game, but to set himself up in a situation where he now had an overwhelming advantage. With five mana in play, he had a handful of quality creatures and removal, while Mouth had nothing left in hand and not much on the table. 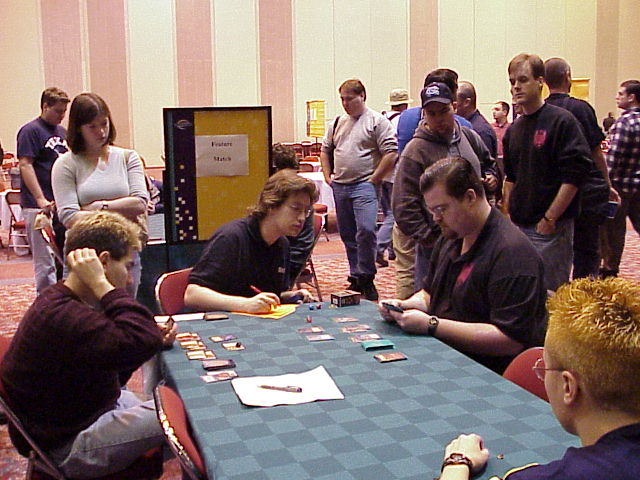 In the second game Darwin's opening draw was better. He did not miss land drops. He cast a couple of early creatures, making sure that Mouth could not overrun him. And on turn 4, he cast Fact or Fiction. Mouth was forced to separate Faerie Squadron + 2 land and Plague Spores + l land. Kastle chose Plague Spores.

On the following turn, Mouth summoned a Sulam Djinn. He was aware that there would be little chance for him to win the game if Kastle played a sixth land necessary to cast Plague Spores and had to try and beat Darwin down before that happened.

Fortunately for Mouth, Kastle did not, in fact, have a sixth land. Kastle was forced to take some damage from Sulam Djinn, but was able to slow it down by absorbing some of the damage with his pro-green Vodalian Zombie. Meanwhile Kastle removed Mouth's other creatures and even dealt one point of damage to him with a Zap, trying to dig deeper into his deck for that sixth source of mana. 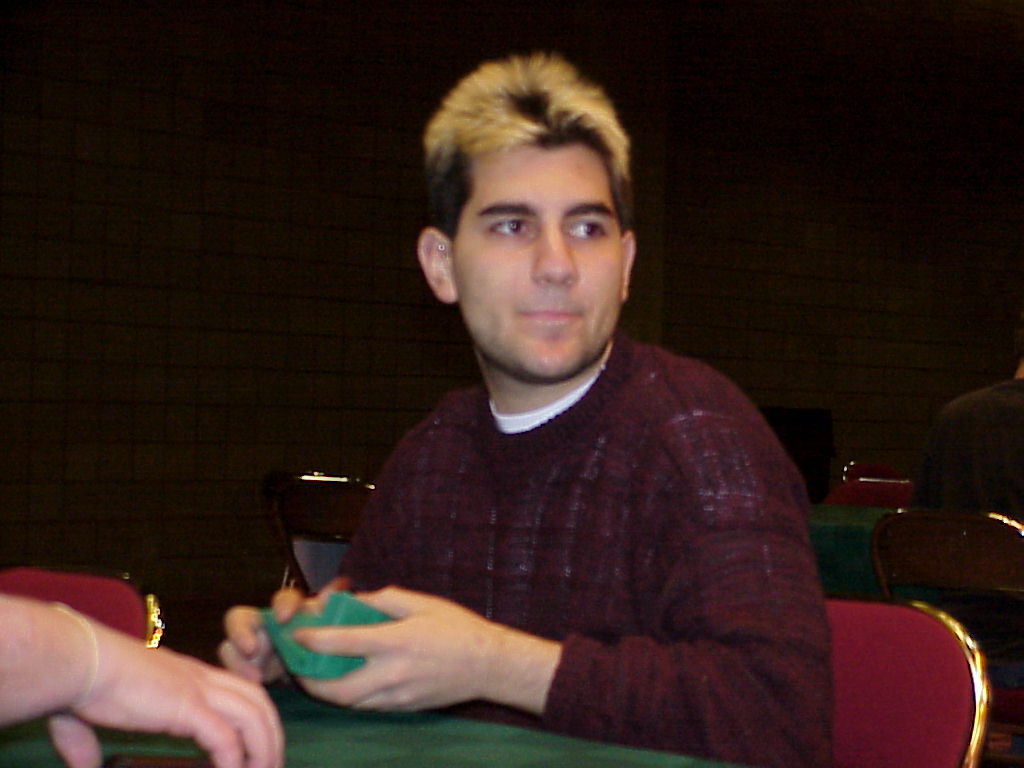 Eventually Darwin did draw the land. He took out the Djinn and proceeded to drop a pair of Faerie Squadrons. Mouth drew one of his better cards - a Meteor Storm - but he only had one other card in hand at the time, and Kastle was not about to give him enough time to draw many more. Squadrons were joined by a Blazing Specter and the game was over soon after.