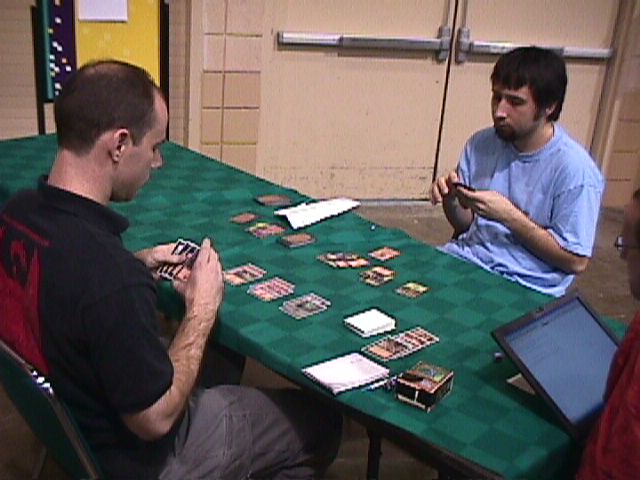 David Humphreys vs. Trevor BlackwellAt 6-1 Humphreys is part of the imposing Boston YMG contingent representing the east while Trevor Blackwell also at 6-1 represents the more laid back but equally talented California posse. Both players are pro tour winners.

Blackwell's red/green deck should be faster than Humphreys' black/red deck so a lot depends on the 7 cards that Blackwell holds in his initial hand. If they are good enough it is very difficult for red/black to overcome red/green's speed, on the other hand if the game takes a while, usually the red/black deck will be able to use its card advantage spells to take control of the game. Humphreys' elim is so good it seems like he should have an edge, except for the Rabid Elephant which with the 4 toughness could be difficult for Dave to deal with.

Blackwell played turn 2 Minotaur Explorer, but lost a Chlorophant from his hand which was just filled with land. A lucky pull by Humphreys. 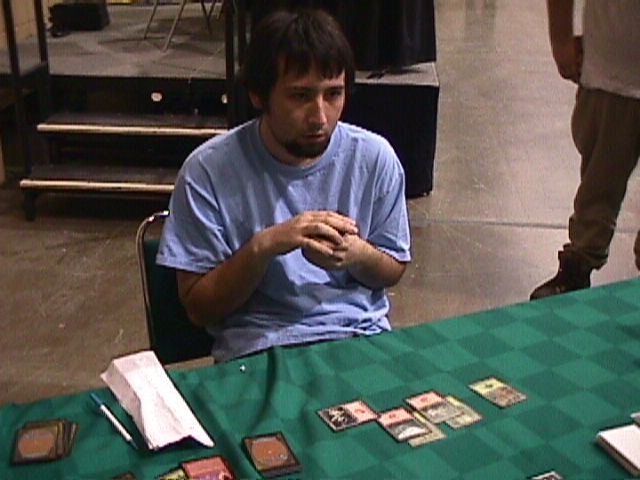 Trevor BlackwellHumphreys used his elim to kill Trevor's creatures, as Trevor played out his hand. When a Gravedigger hit play on Humphreys' side, Trevor nibbled his index finger with a pensive look on his face. Humphreys took the time to look slowly through his graveyard before bringing back his creature. At that point Trevor had drawn roughly twice as many lands as spells, and had absolutely nothing, when he cast a Nantuko Disciple. Too much land! The life scores were 8 for Dave and 10 for Trevor, but the game was clearly going David's way, when Trevor sighed then reached to tap his land, sighed, decided against it, then says "Go." He was clearly unhappy. Hump as usual was nearly unreadable as he took the time to tidy up his lands, then swung with his two 2/2 creatures, then tidied up his land again before Morbid Hungering Trevor. It wasn't long before the Hump put Trevor out of his misery. When the Hump looked at Trevor's graveyard it was clear he thought the game was in the bag and was preparing for game 2. "You're at 3 right?" David asked before he burned out Trevor.

That game all depended on red/green's first 7 cards. They just weren't very good this time. 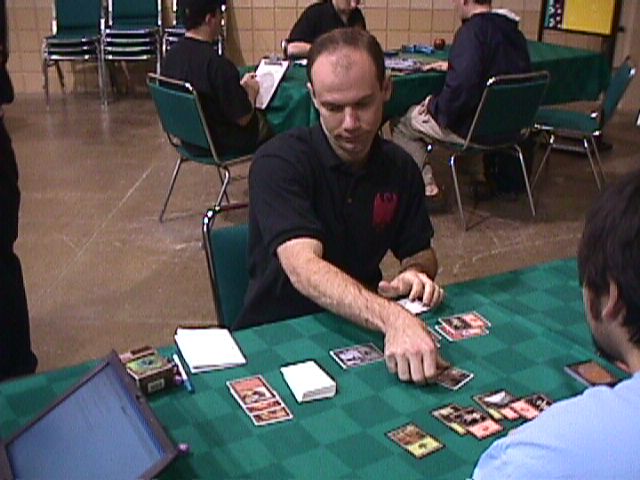 David HumphreysTrevor drew up 7, mulliganed then kept 6. He lead with the turn one 1/1 mountainwalker Dwarven Grunt. Turn 3 Leaf Dancer, flashback Chatter of the Squirrels, so that Trevor had 4 power of creatures, when Humphreys plays his first creature, the Chainflinger. Turn 5 Rabid Elephant left Blackwell with 1 card in hand. Humphreys thought for a while as he stylishly put his hand to his head in a fair imitation of a Rhodan sculpture before he said "Go."

Trevor left back a squirrel on D as the Chainflinger could block it. Humphreys traded with the Leaf Dancer and snipped off the mountain walker. Then on his turn Humphreys killed Trevor's new Chainflinger.

The life scores stood at 20 to 7 in Trevor's favor with an Elephant and a Squirrel token on Trevor's side and nothing on Dave's except for a handful of elim spells.

Trevor looked Hump in the eyes trying to get a read on the Hump, while Dave killed the Lunatic with a Morbid Hunger.

Humphreys has 3 Morbid Hungers but just couldn't find a way to deal with the elephant as the life scores went up and down for Humphreys, taking three from the Elephant, Morbid Hungering 3 to 6 to 3 to 6 to 3. At 9 mana the normally stoic Humphreys let out a sigh as his counted his land. Trevor relaxeed in his chair for the first time in the match as he contentedly shuffled his two remaining cards in his hand around and around. Dave had two elim spells in his hand but without threshold (hard to obtain in red/black) he couldn't quite kill the Elephant.

Trevor looked at Humphreys again, trying to read him then swung. A recently cast Fledgling Imp chumped. Both players were tense, with only a slight edge in Trevor's favor. If only Humphreys could find a way to deal with the Elephant.

Interestingly the Hump never tried to get a read on Trevor (perhaps he didn't care what was in his hand, or perhaps Dave has no talent in reading his opponent) while on the other hand Blackwell was constantly trying to get a read on Dave. Again they traded life, the Rabid Elephant taking Hump down to 3 and then up to 6 and down to 3, while Trevor went down to 11.

"That's all of them right?" Trevor asked. Then he cast the Springing Tiger he had been holding. A nice play there by Trevor, waiting until the Morbid Hungers were gone before playing it out. Trevor swung one more time and that's the game.

For the first time in the match Trevor smiled a little half-smile. Both players sideboarded again.

Blackwell decided to sideboard in white because he has both the red and the black white enchantments that decrease damage by two, Sphere of Law and Sphere of Grace. Trevor asked head judge Thomas Pannel how much time he had left to sideboard, but due to the lack of time decided against using the white after all.

Surprisingly Hump decided to draw instead of play. Trevor lead with a squirrel then flashed it. Blazing Salvo on an Imp took Humphreys down to 10, with a Nantuko Disciple and a squirrel on Trevor's side with a Fledgling Imp on Humphreys' side.

Only 12 minutes remained and both players sped up their play.

Hump missed a land drop and was stuck at 4. That could be the game right there. Finally I understood why Humphreys wants to draw with this deck. It's critical that he gets up to 6 mana, and even if he takes a bit of damage, the Morbid Hungers in his deck will give him back the life he lost by having to play second.

Dave dropped an Assassin. Liquid Fire put 2 on the assassin and 3 to Dave. The Rabid Elephant came over for a visit. Dave went to 4. Oh my! Another missed land drop on Hump's side. That's gotta hurt.

Elephant and squirrel came to say hello while the Imp chumped. Dave agonized over trying to achieve threshold by making his little imp hop in the air. Hop in the air (so his elim spells reach threshold to kill the Rampant Elephant) or no? Hop in the air or no? He sighed, touched his mana. Thumped his fist on the table lightly, shook his head. Hop Imp hop! Dave then used a small burn spells on a newly cast Chlorophant on Trevor's team.

He untapped and then there it was. Land number six! Humphreys made that poor Imp hop in the air for nothing. He threw down a Liquid Fire to take out the Elephant. Humphreys traded elim spells with Trevor's critters for a while. But Trevor was able to keep a Chainflinger alive with Refresh from a Morbid hunger. Finally Humphreys was drawing the land he needed earlier.

Hump went back down to 2. They were playing lickity-split right on the edge of their seats with 5 minutes left. Someone would win. A Mad Dog entered play on Trevor's side.

Anarchist brought back a Morbid Hunger. A Barbarian Lunatic killed the Anarchist so Humphreys couldn't block, Trevor swung, and bang, that's the game.

Humphreys said with a smile "That Elephant is the only creature in your deck which is a problem for me." With the game over both players relaxed and joked again and chatted about the game. A victory for the West Coast and red/green beats.