Not much is happening here in the final round. The folks at the top of the standings are all playing, but they're all guaranteed to advance. The middle bunch all played it safe - 22 matches intentionally drew. Only two matches are really on the cusp, and this is one of them.

David Price, playing mono-black control, is 5-1-1. He needs to win in order to make Day 2. His opponent is Derek McClasky, a solid player from Columbus, Ohio, without much of a resume. Derek is 5-0-2 and was paired down. He will need another win as well, and his blue/green threshold deck has its work cut out for it. 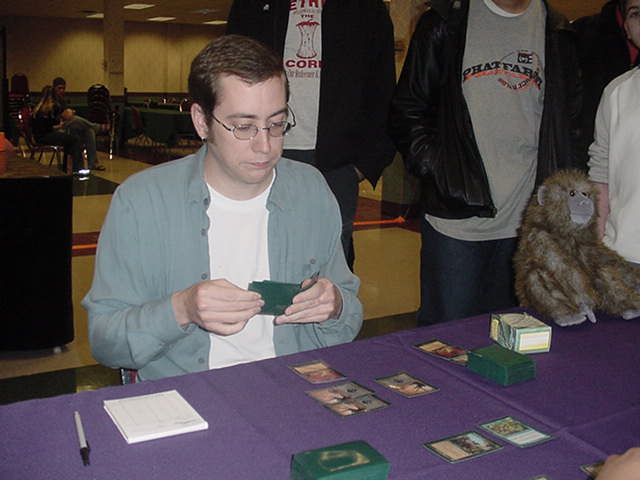 Derek started off with a Nimble Mongoose - not amazing, considering that all of Price's removal is non-targeted anyway. Price Duressed McClasky for Fact or Fiction, revealing a hand of Werebear, Merfolk Looter, and Upheaval. McClasky drew a Force Spike and used it to counter Price's first Chainer's Edict, but the second Edict went through and offed the 'Goose.

McClasky, still short on business, dropped his Looter, and Price Soul Burned it for 1, biding his time. McClasky played a Werebear, trying to deal some damage, but Price had the nasty combo of Cabal Coffers and Planar Portal. After Duressing McClasky's Upheaval, Price started "Jayemdae Tutoring" for the goods: Chainer's Edict and Haunting Echoes. The Echoes forced a Concession from McClasky; he didn't want Price browsing his through his deck when the game was already way out of hand.

Price won game 1 without dealing a single point of damage to McClasky.

Price made a few minor adjustments when sideboarding, but nothing as devastating as McClasky's addition of 4 Composts.

Price's opening hand in game 2 was very slow, and McClasky's turn-2 and 3 double Compost looked to make things complicated. Price tried to cast as few spells as possible, Mutilating away two Werebears, but his Phyrexian Arena was countered by a Mystic Snake, and his Haunting Echoes was Memory Lapsed. McClasky was busy building the perfect hand, and the turn after the Memory Lapse he played the one-two punch of Upheaval and Nimble Mongoose… and Price had no Innocent Blood. The 3/3 was quickly joined by a 4/4 Werebear, and a few counterspells allowed McClasky to ride them two green beaters to victory. 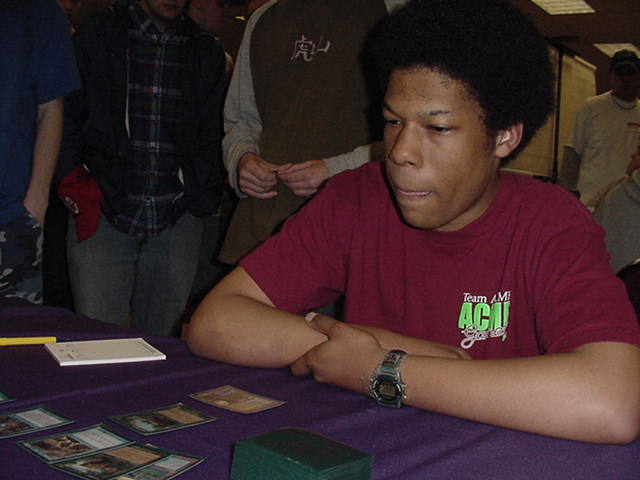 It was obvious from Price's face that he had no real answers to Compost, and he just had to hope McClasky didn't draw so many of them.

Too bad for Price. McClasky busted out turn 2 and three Composts again in the deciding game, but Price had a little card-drawer of his own: Phyrexian Arena. Let the card drawing begin!

McClasky started in the beats with a pair of 1/1 Mongeese, but Price took advantage of his lack of double blue by Diabolic Tutoring for an Engineered Plauge, which he cast naming "Mongoose." McClasky eventually drew some land but refused to cast anything, trying to get Price to choke on his own Arena.

Price was choking, considering he kept drawing land, land, and more land. Several of his draw phases revealed a pair of Swamps. Eventually he decided to go for it, tapping his Coffers for a ton of mana, and casting a second Arena. McClasky didn't mind. He didn't mind the third Arena, either, but he was a little concerned by the nine-point Corrupt Price aimed at him. So he Memory Lapsed it.

Price's four draws (from 3 Arenas) netted him Swamp, an Edict, an Innocent Blood, and the same Corrupt. He didn't think it was worth risking, however, and said, "go." The game was actually pretty close at this point, as McClasky had only drawn two cards total off the Corrupts (from Diabolic Tutor). All the rest of Price's black spells were either permanents (Plague and Arena) or were Memory Lapsed.

But, with all the time he had, McClasky was building another Upheaval hand. When Price didn't do anything after drawing four cards, McClasky decided to pull the trigger: Upheaval, Nimble Mongoose.

Price had Innocent Blood ready, however, and as time ran down, it looked like neither would be able to win.

And that's basically what happened. Price Addled away McClasky's other creature (Werebear), and McClasky couldn't deal eight damage with the Looter before time ran out. Price ended up holding three Corrupts but couldn't get back to six mana fast enough after the Upheaval.

As the final extra turns slipped away, McClasky made a thinly veiled plea for a Price concession, but Price wasn't buying it. The match ended in a draw, and neither player advanced to Day 2.