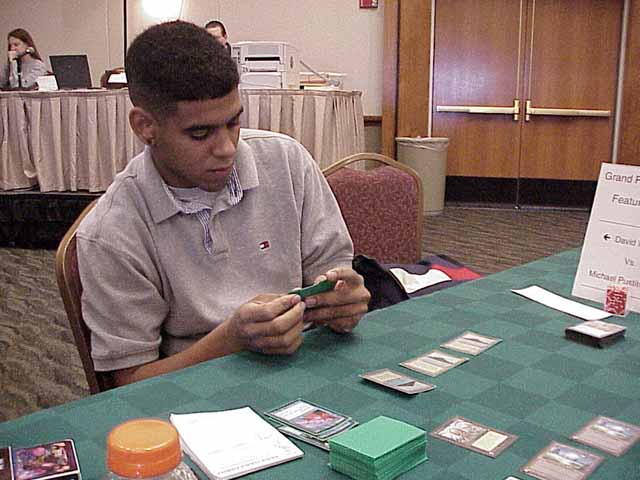 These guys have played each other countless times in various Pro Tours and Grand Pris over the years, and when David Williams and Mikey P. sat down across from each other in round right, the average bystander would detect the light mood. Probably the most interesting matchup in the tournament this round, David was playing a variation on Turboland that morphed into something that he liked to call, "Oblierwhat? Obliterwho?" The crux of David's deck was to abuse the card drawing power of the combination of cards like Fact or Fiction, Gush, Exploration, and Horn of Greed, while backing up the plan with Counterspells of various types including one of the best cards in the format, Force of Will. Mikey P was playing a tweaked version of an extended standard, Trix.

The first game was absolutely brutal to Williams. After winning the roll, he proceeded to mulligan down to a six card hand with very few 'business' cards. Mike's hand though, was superb. He started out with a couple swamps, and thanks to a Demonic Consultation, found a Necropotence for turn three, backed up by not only an Unmask (alternate cast) but a Force of Will as well. David did have 2 counterspells, but thanks to the Unmask Mike forced his Necro into play and won 3 turns later when the massive card advantage kicked in full force.

The second game was much more interesting, as David started out with a much better hand, revealing two Annuls, a Counterspell, and a few other decent cards. Mike took away an Annul, and bode his time until he decided to go for it on turn eight. With a Necro and two Force of Wills (and two blue cards) Necro did not resolve, as David had found another Annul in the interim, and Mike was left without a hand, and only land in play. The card drawing in David's deck really kicked in at this point, and he found a Spike Feeder soon after the counter war. The Feeder poked away at Mike's life total until Mike was forced to concede on turn 15 at 2 life. Interestingly enough in this game, Williams let a Back to Basics resolve on turn three, with only one basic land (Island) in play at the time. With a couple alternate cast Gushes over the course of the game, the Back to Basics never really hurt Dave, and Mike realized this for game three, as he sideboarded them all out. 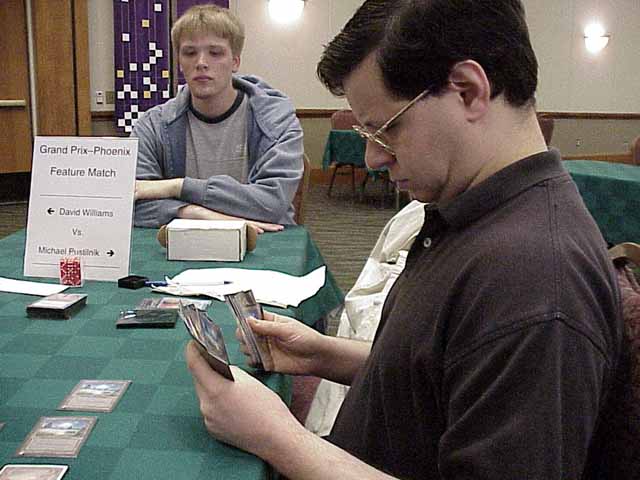 Game three was absolutely crazy. The entire thing lasted about six turns total. Everyone watched on at David's look of horror when Mike dropped a first turn swamp followed by two Mox Diamonds. There was no Necro though, that turn, and Dave sighed with relief, as now Mike was down to two cards as well. Dave played his Island, and Mike consulted for Necro. With audible crankiness, David lamented the situation. It was all an act, and when Mike tried the Necro, Williams had the Annul at the ready. However, Mike had a blue card in his hand the turn before (Donate) and had just peeled a Force of Will off the top of his library that turn. Necro resolved, but only after the consult that was used to get it removed three of Mike's four Illusions of Grandeur from the game. With 21 cards left in his library, things still looked ok for Mike unless the last Illusions was in the bottom six. Mike drew 14 cards to start. No Illusions. After Duressing away a few counters, Mike drew another three cards next turn. STILL no Illusions. After Williams used a scroll rack to hide a Force of Will from an Unmask, Mike finally got the Illusions after Necroing down to one. This small fact would prove to be very important, as when Mike when for the win next turn, David was able to Scroll Rack again and find a blue card (Gush) to go with his Force of Will and countered the Illusions. Being at one life, Mike was unable to counter back with his own Force of Will, and he conceded and congratulated Dave. The game basically came down to the last turn where Dave was able to Scroll Rack for two. Williams needed to find a blue card there for the win, and he found it and won the match.